You Are Here: Home → 3,000 teens attending BBYO Convention that propagandizes them on Israel

3,000 teens attending BBYO Convention that propagandizes them on Israel 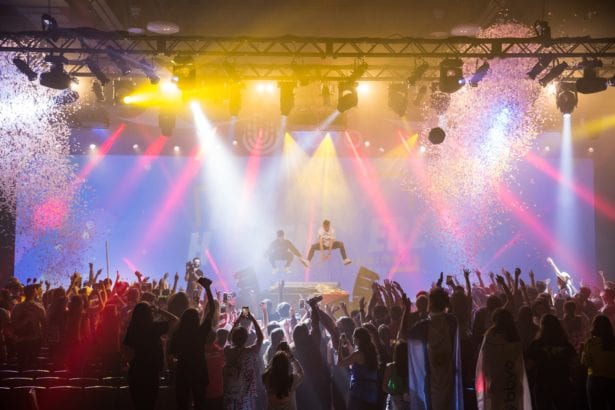 More than 3,000 Jewish teens are attending a convention this weekend by an organization that propagandizes them to support Israel despite Israel’s long record of discrimination, human rights violations, and spying on the US.

The organization is BBYO (B’nai B’rith Youth Organization), which states that it is “the leading pluralistic Jewish teen movement aspiring to involve more Jewish teens in more meaningful Jewish experiences. With a network of hundreds of chapters across North America and in 50 countries around the world, BBYO reaches over 70,000 teens annually and serves as the Jewish community’s largest and most valuable platform for delivering fun, meaningful and affordable experiences that inspire a lasting connection to the Jewish people.”

One of BBYO’s activities is promoting Israel.

The organization states that it has an “unwavering commitment to the State of Israel” and reports that it has brought “a connection to Israel “to thousands of Jewish teens. Today, BBYO reaches 70,000 Jewish teens in 700+ chapters across 50 countries around the world.”

BBYO reports: “For more than 95 years, BBYO‘s leadership programs, the Aleph Zadik Aleph (AZA, high school fraternity) and the B’nai B’rith Girls (BBG, high school sorority) have been providing exceptional leadership programs and identity enrichment experiences, shaping the confidence and character of more than 350,000 alumni who are among the most prominent figures in business, politics, academia, the arts, and Jewish communal life.”

It states, “AZA and BBG’s history is closely tied to that of the State of Israel. AZA and BBG leaders signed a declaration recognizing the State of Israel before independence in 1948 and have been experiencing Israel through teen travel since 1956. As the leaders of the global Jewish community, it is our responsibility to learn about, appreciate, advocate for, challenge, and shape the future of Israel.”

One of its programs has been “‘Speak UP for Israel‘, BBYO’s campaign for Israel education and advocacy.” Another is its “Explore Israel” initiative, which works to “empower leaders, dialogue with local, national, and international government representatives, plan rallies, write petitions, create information campaigns, and utilize media outlets to educate our communities and advocate for Israel.”

Still other programs take teens and families on promotional trips to Israel. BBYO’s 2019 annual report states: “BBYO is the “largest provider of Israel travel for Jewish teens and their families.” It partners with an Israeli organization that provides “a team of operational professionals and educators who are deeply committed to sharing their love for Israel.”

While the programs says that the trips include “face-to-face encounters with teens and adults representing all viewpoints and thoughtful dialogue,” there is no indication that these include members of such Israeli organizations as B’Tselem, Breaking the Silence, or the Public Committee Against Torture in Israel.

The BBYO website and Youtube channel show videos from BBYO trips to Israel that depict enjoyable, fun-filled trips to Israel where Jewish teens bond with one another and with the Israel they’re shown.

While the groups visit Jerusalem, there is no indication that they visit areas where they would see the way Israeli officials frequently harass and humiliate Palestinians, the ongoing confiscation of Palestinian land, and the Israeli demolition of Palestinian homes.

The trips also seem to avoid the Palestinian Occupied Territories, just a short distance away, and what’s happening there:

While BBYO trips take participants on trips all over Israel, it appears they’re not shown Israeli actions against Gazans:

There’s also no indication that teens on these trips learn that the beautiful Arab homes they see were built by the population expelled in Israel’s founding war of ethnic cleansing, and that most of those demonstrating in Gaza (and being shot weekly by Israeli forces), are Palestinian families driven out by Israel, their lands and homes confiscated by the new Jewish state.

BBYO partners with a number of other organizations in and related to Israel. In 2015 the BBYO executive committee formally recognized the Maccabi World Union (MWU) “as BBYO’s sister movement and partner in Israel, and committed to welcoming new members into AZA and BBG at the beginning of their eighth-grade year.”

MWU’s website states: “Maccabi World Union (MWU) is the largest and longest running Jewish sports organization spanning over five continents, in 80 countries, 450 clubs, and 450,000 members.” It self-identifies as “a Zionist organization” and announces that it uses sports to bring Jewish people of all ages “closer to Israel.”

Bonding and Bringing justice for some

This weekend’s event –  the BBYO International Convention 2020” in Dallas, Texas – appears to be an exciting, bonding experience for the kids attending it. Between the interludes of high energy music there are diverse progressive activities of various sorts: sustainability, immigrants, etc. There are also segments concerning antisemitism (which may or may not include the newly fabricated version) and Israel. For example, there’s “an afternoon with Israel’s hottest start-ups, entrepreneurs, and products. Learn from The Times of Israel editor Sarah Tuttle Singer and get to play with fun technology, like a 3D fashion pen. Learn how to take your start-up idea from dream to reality.”

“The Schusterman foundation announces that it is “committed to building deeper knowledge, appreciation of and connection to Israel.” Its website states: “Our love for Israel has figured strongly in our philanthropy since the earliest days of our foundation. Despite the many challenges it faces, Israel continues to be a source of inspiration for all who know its history and appreciate the principles that continue to guide it today: democracy, freedom of expression and progress through innovation.” It announces that it has “devoted substantial resources to strengthening Israel both at home and abroad.”

Another program is “Dialogue: Israel Through the Eyes of Young People, Facilitated by Barry Finestone, President and CEO of the Jim Joseph Foundation joined by teen leaders.”  Like Schusterman, the Jim Joseph Foundation is firmly committed to Israel, funding numerous projects supporting and promoting the country, including Birthright Israel, which takes Jewish young people on promotional trips to Israel. Last year’s program also included a number of Israel-focused panels and activities.

The online videos of this weekend’s 2020 event show numerous engaging, intelligent young people attending the convention. Many seem committed to helping others and making the world a better place.

Despite BBYO’s agenda and slick packaging, it’s possible that many of these young people will eventually expand their commitment to working for human rights for all, including Palestinians, and that sometime in the future they will join the profoundly diverse, multi-ethnic, mutli-racial, multi-faith movement for peace and justice in Palestine.