You Are Here: Home → One-third of Gazans slain by Israel were women & children 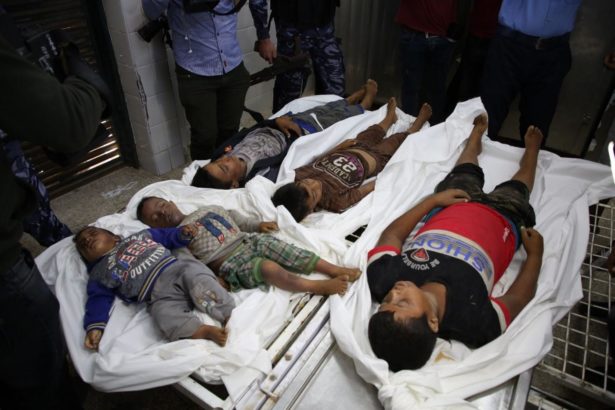 The bodies of five children from the same family killed in an Israeli air strike on Wednesday lie in a hospital ward in Gaza. (MEE/Atiyya Darwish)

A third of the Palestinians killed by Israeli forces in the 3-day offensive on Gaza were women and children. 111 Palestinians, including 46 children and 20 women, were injured. The bombardment damaged dozens of homes, 15 schools, farmland. 8 members of one family were killed in their home. No Israelis were killed; 5 were injured… Three reports below:

Palestinian Health Minister, Dr. Mai al-Kaila, has reported that one-third of the Palestinians, who were killed by Israeli missiles and shells in the three-day offensive on Gaza, are women and children.

In a press release, Thursday, Dr. al-Kaila stated that the Israeli army killed 34 Palestinians in its offensive, which began on Tuesday at dawn and ended with a ceasefire, on Thursday morning.

She said that the Israeli army eight children and three women, and added that 111 Palestinians, including 46 children and 20 women, have been injured.

“This terrifying fact proves that Israel committed a serious crime, a premeditated murder of children and women,” she said, “This is not an accidental killing, or a mistake, but rather a deliberate, calculated policy.”

The Minister stated that the international community must end its silence and idleness, and act on providing the needed protection to the Palestinian people.

“Israel obliterated families; one clear example of that is Abu Malhous family that lost eight of its member due to the Israeli missiles,” she concluded, “Moreover, the psychological trauma, the grieve, will continue to impact the lives of hundreds of Palestinians.”

Besides destroying or damaging dozens of homes, the Israeli missiles caused damage to fifteen schools in the two days of ongoing bombardment.

Six schoolchildren were killed, and many others were injured, in addition to the dozens of children who suffered extreme anxiety attacks.

The Israeli missiles caused damage to 185 homes, and destroyed five other homes, in several parts of the Gaza Strip.

No Israelis were killed. The Times of Israel reports that 5 Israelis were injured –3 directly wounded by rockets fired by Palestinian resistance groups, including a woman who sustained moderate injuries when she was struck by glass shards from a window in her apartment, and 2 people sustained light injuries from shrapnel. The Washington Post reports that Palestinian rockets damaged several homes and factories.

Two-day Israeli onslaught leaves 34 Palestinians dead, including eight members of the same family who died in their home

After two days of escalating violence in the Gaza Strip which has left at least 34 Palestinians dead, a ceasefire came into effect early on Thursday.

Musab al-Breem, a spokesman for Islamic Jihad, told Middle East Eye that his movement had set conditions on accepting the ceasefire, which was mediated by Egypt and the UN, and that Israel had agreed on the conditions.

Breem said: “The occupation surrendered to the conditions of the resistance.”

Khader Habib, a senior leader in the group told MEE that the deal had been brokered by Egypt and the United Nations and that Israel had agreed to immediately halt its attacks on Gaza, including air strikes and targeted killings, and cease to use live ammunition against protesters in the Palestinian enclave.

“The ceasefire was brokered by Egypt and the UN. They are the parties who are entitled to deal with any Israeli violations.”

In return, Islamic Jihad had agreed to stop firing rockets into Israel.

The ceasefire, which entered into force at 5.30am (0330 GMT), came after the death toll from Israeli air strikes on the Gaza Strip rose to 34 since Tuesday after Palestinian officials said eight members of the same family had been killed.

Statistics for the casualties issued by the Gaza Ministry of Health showed that the total number of dead included eight children and three women. The Ministry of Education confirmed the deaths of at least six elementary and high school students.

The wounded numbered 111, including 46 children and 20 women, the ministry said.

On the ground, there was a tense calm prevailing across the Gaza Strip, with the sound of Israeli military drones still buzzing overhead.

As the ceasefire takes effect, people opened their shops, streets were full of cars and everyday life began to return to normal.

Schools and all other government institutions remained closed as they were directed to do so on Wednesday evening when the Israeli bombardment of Gaza was underway.

The scene was different in hospitals across the Gaza Strip, where relatives of those killed during the two-day Israeli onslaught were preparing them for burials.

Tens of relatives of those wounded in the strikes were also standing in queues at the doors of hospital rooms waiting to visit them.

‘He had never been involved in any resistance action’

Said Abu Karam, from al-Toffah neighbourhood in northern Gaza City, had just returned home after visiting his brother-in-law at al-Shifa Hospital, the largest one in Gaza, where most of the most critical cases were being treated.

“He was wounded in an Israeli air strike targeted at a deserted house in the neighbourhood,” Abu Karam said of his brother-in-law.

“He was about 50 metres from the house, but some shrapnel hit his thigh and caused a deep injury,” Abu Karam said, adding that he was now in a stable condition.

The situation was different for Abdallah Ayyad, who lost three relatives in an Israeli air strike near their house in al-Zaytoun neighbourhood, southeast of Gaza City.

“My cousin Raafat was a farmer and he had never been involved in any resistance action,” Ayyad said.

“My other relatives were young and their only fault was that they lived in a house located in an agricultural area,” he said. “They were playing together near their home.”

During previous escalations and offensives, Israel has dealt with anyone moving in agricultural and wide empty areas as targets, because some Palestinian groups have launched rockets from such places.

The Gaza-based Ministry of Health said on Thursday morning that eight Palestinians from the same family had been killed by an Israeli air strike.

Witnesses said the house of the al-Sawarka family, located east of the city of Deir al-Balah in the middle of the Gaza Strip, had been hit at about 1:15am.

Six bodies from the family were removed from under the rubble during the night and two were evacuated after the sunrise.

The ministry said that the two other family members who were evacuated after the sunrise were children, identifying them as Salim and Firas. It has not yet provided their ages.

‘The Middle East does not need more wars’

Israel unleashed an air campaign on Gaza after it assassinated senior Islamic Jihad commander Bahaa Abu al-Atta and his wife on Tuesday morning.

The armed group retaliated by launching salvoes of rockets into Israel and pledging to keep up its attacks.

Nickolay Mladenov, the UN envoy to the Middle East peace process, said that the ceasefire was the fruit of joint Egyptian and UN efforts.

“Egypt and the UN worked hard to prevent the most dangerous escalation in and around Gaza from leading to war,” he wrote on Twitter.

“The coming hours and days will be critical. ALL must show maximum restraint and do their part to prevent bloodshed. The Middle East does not need more wars.”

Israeli group opposes: ‘A war to keep Netanyahu on his throne’