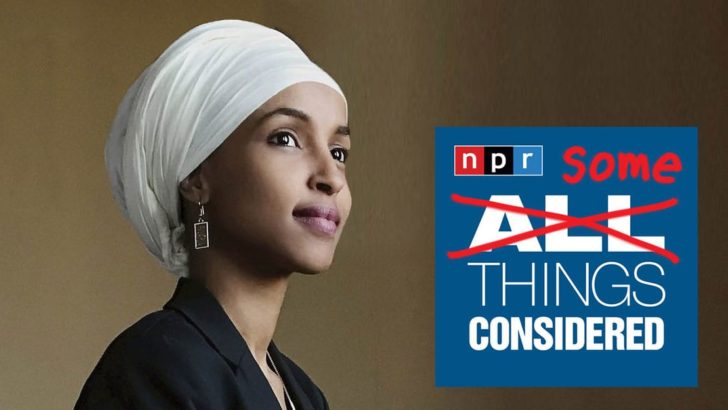 In response to an email I sent complaining that NPR had aired a one-sided, slanted report on the Ilhan Omar controversy, reporter Susan Davis replied that their coverage was “fair.” She emailed that the controversy was Omar’s fault, calling it “a self-inflicted PR mess by a sitting member of Congress.”

The report had been aired on NPR’s All Things Considered program, reportedly “the most listened-to, afternoon drive-time, news radio program in the country.”

Let’s look at what constituted Omar’s alleged “self-inflicted PR mess”: she mentioned the influence of a special interest lobby on politicians’ stances.

This is a widely understood reality. Politicians and others frequently discuss the influence of the NRA, the pharmaceutical lobby, and other special interest groups. Democrats periodically call out conservative lobbies; Republicans do the same for liberal ones. This is considered politics as usual.

That’s what Omar did.

Let’s look at the sequence of events that led to the controversy over Omar:

1. Journalist Glenn Greenwald (who is Jewish but has also been accused of being “antisemitic”) tweeted: “GOP Leader Kevin McCarthy threatens punishment for @IlhanMN and @RashidaTlaib over their criticisms of Israel. It’s stunning how much time US political leaders spend defending a foreign nation even if it means attacking free speech rights of Americans.”

(The phrase “attacking free speech rights of Americans” refers to legislation to impede the right to boycott Israel; 75 percent of Americans oppose such legislation.”

2. Omar retweeted Greenwald’s post with the comment: “It’s All About the Benjamins.” (Benjamins is a colloquial term for money – Benjamin Franklin is on the $100 bill.)

3. Pro-Israel journalist Batya Ungar-Sargon posted a sarcastic tweet saying she’d “like to know” who Omar “thinks is paying [sic]American politicians to be pro-Israel….”

AIPAC is the American Israel Public Affairs Committee – a lobbying organization that claims to be, and is widely regarded as, extremely influential in Congress.

In other words, the controversy began over Omar’s two tweets, a total of six words.

For this exchange, Israel partisans, and those who desire their campaign donations, called Omar “antisemitic.” (This epithet is frequently deployed against proponents of Palestinian rights. An Israeli Knesset member has explained that this is a frequently used “trick.”)

AIPAC and the Israel lobby

But Omar had not said anything about “Jews” or “Jewish.”

Omar had simply referred to a special interest lobbying group – an organization with an income of $230 million that refers openly to the “key role” it plays in advancing legislation.

Fortune magazine once ranked AIPAC “the second most powerful interest group in Washington.”

In 2016 Fortune described AIPAC as “the biggest, most powerful group in the Israel Lobby.”

Former AIPAC official, M.J. Rosenberg wrote of Omar’s tweet: “AIPAC’s political operation is used precisely as Representative Omar suggested.” Rosenberg pointed out: “The power of AIPAC over members of Congress is literally awesome, although not in a good way.”

Pro-Israel New York Times columnist Thomas Friedman wrote in 2011 that Congress’s many standing ovations for Israeli Prime Minister Benjamin Netanyahu had been “bought and paid for by the Israel lobby.”

In November’s mid-term elections, pro-Israel campaign donors gave millions of dollars to both parties. Israel advocate Sheldon Adelson, alone, who says he wishes he had served in the Israeli army rather than the U.S. military, gave $123 million.

Although ambitious politicians from both parties attacked Omar for publicly stating the obvious, numerous people defended her; there were articles in The Nation, the UK Guardian, The Intercept, and many other places. An Israeli journalist based in the U.S. tweeted Omar was “exactly right.”

In her email to me, reporter Susan Davis claimed that the All Things Considered report was “fair.” But a fair report would have reported both the criticisms of her and the defenses.

Instead, NPR only told listeners about the accusations against Omar. There was no mention of the many people who supported her, said her point was valid, and provided evidence for their statements.

In her report, Davis had told listeners: “She’s facing scrutiny for comments that both her allies and her critics consider anti-Semitic.” This suggested that the condemnation was universal, when in reality many allies and others disagree.

A full, fair, accurate report would have followed the sentence about the claims against her with another: ‘But many people disagree and say her remarks are valid.’

That’s not what NPR did.

Following are the other assertions in Davis’s email. These indicate a profoundly skewed perspective on the controversy, albeit one that conforms to a pervasive blindspot within much of the media. This is unfortunate in an otherwise thorough and professional journalist like Davis, who can and hopefully will do better.

She was universally condemned by her own party, Democratic leaders, and every major chairman in the Congress.

Davis’s claim that Omar “was universally condemned by her own party” is untrue.

There are thousands of people in the Democratic party; most didn’t say anything. In fact, a 2018 Pew poll showed that “nearly twice as many liberal Democrats say they sympathize more with the Palestinians than with Israel .”

Bernie Sanders, perhaps the most popular leader in Congress, met with Omar and offered his support.

A former member of the Democratic National Committee’s executive committee said the attacks were “outrageous.” He wrote that Omar was being condemned because “she dared to point out, as a leading New York Times columnist and so many others have in the past, the intimidating role that AIPAC plays in shaping US policy toward Israel. The response was nearly hysterical.”

He wrote that Israel supporters “have weaponized anti-Semitism, turning it into a blunt instrument in a crude effort to pummel opponents and silence legitimate debate on the Israeli-Palestinian conflict.”

While Davis notes that major Congressional chairmen are against Omar, she fails to mention that Nancy Pelosi intentionally stacked the deck. Speaking a while ago before a pro-Israel convention backed by Sheldon Adelson, Pelosi announced:  “We have people very well paced to share our values.”

She apologized for using what she acknowledged were anti-Semitic tropes, if inadvertently.

This statement is also untrue.

Nowhere did Omar “acknowledge” that she had used “anti-Semitic tropes.”

In reality, Omar had apologized for “any actual hurt” her words may have caused, but said she would not change her views of the “problematic role of lobbyists in our politics.”  She said: “It’s gone on too long and we must be willing to address it,’ she said.”

Many people felt there was no need for Omar to apologize for making a factual statement; if anyone was allegedly “hurt” by her statement about a special interest group, this was their problem, not hers.

Our coverage was fair and accurately reflected those facts.

The coverage was not fair.

It reported one-side of a controversy that has two sides. It reported some facts and left out other facts.

Several media analyses have shown that NPR has a pattern of pro-Israel reporting.

An earlier report on Omar similarly included only Israel partisans as commentators.

A 2001 study by Media watchdog organization FAIR showed that NPR covered the deaths of 90 percent of Israeli children killed, while informing listeners of only 20 percent of the Palestinian children who had been killed. (To see all the Israelis and Palestinians who have been killed in recent years, go to this Timeline.)

FAIR reports that its analyses through the years have found “that NPR takes a default pro-Israel line when reporting on the affairs of Israel/Palestine. Its correspondents almost always live in West Jerusalem or in Israel proper, are rarely Palestinian or Arab, and they work consistently to deflect blame for Israeli violence—either shifting blame onto Palestinian victims or dispersing it through false parity.”

Currently, NPR has failed to inform listeners that bills before Congress right now would give Israel $38 billion over the next 10 years, the largest U.S. military aid package in history. This works out to $23,000 per Jewish Israeli family of four and over $7,000 per minute.

NPR is the go-to radio channel for many Americans. It is essential that it air full, unbiased, accurate reports, not one-sided, prejudicial dispatches.

Anyone who wishes All Things Considered and NPR in general to do better in future reports, can contact them here, and register your opinion here.