You Are Here: Home → Neocons tell Democrats how to get rid of Ilhan Omar

Neocons tell Democrats how to get rid of Ilhan Omar 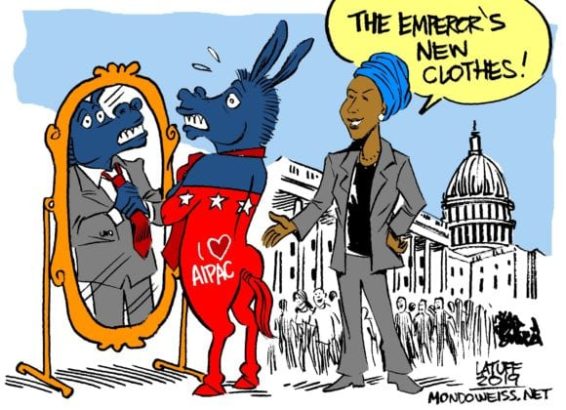 Neocons (Israel partisans who switched from the left to the right) have come and gone and then come again. Some are part of the “Trump resistance”… their new media incarnation “The Bulwark” advises Democrats how to get rid of the freshman Congressional rep who blew the whistle on AIPAC…

It has been observed that the neoconservatives are a lot like the legendary bird the Phoenix, which burns to death and then, miraculously, rises from the ashes in new plumage. [Read about neoconservatives here.]

The neocons first rose to prominence under President Ronald Reagan, when they took over key offices in the Pentagon. They were subsequently somewhat ostracized under George H.W. Bush who did not like them, but they got their revenge by joining in the chorus that brought the incumbent elder Bush down and replaced him with Bill Clinton, who, in fact, pursued an interventionist foreign policy much more to their taste.

Again dominant in the Pentagon and White House under George W. Bush, the neocons went into exile under President Barack Obama, though they were at the same time infiltrating the foreign policy establishment of the Democratic Party. This transformation produced Hillary the Hawk and the Democrats have now become the party of war just as enthusiastically as the Republicans, with both favoring what might be described as a neocon foreign policy.

The emergence of Donald Trump was a shock to the neocon ascendancy. Most neoconservatives condemned his candidacy because of his critique of useless Middle Eastern wars and his stated intention to mend relations with Russia. While some neocons have crept back into the White House, most notably John Bolton and Elliot Abrams, some have continued to rail against Trump.

Under the banner of the “Never Trump Resistance” neocon leaders like Bill Kristol have continued the struggle to replace Trump with a more to their taste Mitt Romney or Lindsay Graham, leaders who are fully prepared to crush the Mullahs in Iran and to wage perpetual war against Godless communism.

Kristol nevertheless paid a personal price for his obstinacy. The neocon flagship publication The Weekly Standard, long Kristol’s mouthpiece, ceased publication in December, partly over to its waning popularity due to its hostile attitude towards Trump. But in today’s America, mendacity is nearly always rewarded and, in early January, a new webzine publication headed by Kristol emerged under the banner of The Bulwark, which was at least somewhat intended to take the place of the old Weekly Standard. The publication’s launch promoted the enterprise as the center of the “Never Trump Resistance.”

Advice to Democrats: How to get rid of Ilhan Omar

Given that pedigree, one might well have expected a barrage of articles condemning Donald Trump and all his works, which, indeed, are part of its still miniscule archive, but the first article on The Bulwark that has popped up somewhat into the mainstream is, predictably, all about Israel. It is entitled “How the Democrats Can Get Rid of Ilhan Omar: It’s going to take a primary opponent, but not just any primary opponent.”

Yes, the freshman congresswoman from Minnesota who dared to suggest that Jewish money [she actually said AIPAC] just might be influencing congressional subservience to the state of Israel has now been elevated to public enemy number one in the eyes of the neoconservatives. “Never Trump” has been replaced by “Get Rid of Omar.”

The Bulwark article refers to Ilhan Omar’s supposedly thinly veiled anti-Semitism and observes how she had resisted being properly schooled in the Israeli viewpoint on what is occurring in the Middle East so as to avoid inappropriate references to the Jewish state and its legion of diaspora supporters.

Ilhan Omar’s education in the realities of Jewish power has apparently been ongoing for the past year, since before she was elected to Congress. Minnesota media reports describe how “fellow Minnesotan U.S. Rep. Dean Phillips, a Jew representing a neighboring district, engaged her in a type of educational discussion following what he called an “impassioned face-to-face conversation with Omar.”

And last year, leaders of the Minneapolis Jewish community came together for what might be described as an “anti-Semitic intervention of Omar.” It was organized by state Senator Ron Latz, who invited Omar to his house, where a number of Jewish leaders had gathered. “We wanted to reach out to her. We were a bit troubled about several things she had said.”

Among their concerns was a 2012 tweet in which Omar wrote: “Israel has hypnotized the world…” Subsequently, Latz would not describe in any detail what was discussed but he personally commented that the problem wasn’t in the policy dispute over Israel, but the “diction and tone.”

It should be noted that Omar has spoken and tweeted about Israel but has never denigrated American Jews either as a religion or ethnicity.

Nevertheless, at the same time, it is clear that some American Jews have determined that nearly any criticism of Israel equals criticism of Jews which is equal to anti-Semitism, so one has to wonder about the standard that is being applied to the congresswoman even given Latz’s denial that it is a question of foreign policy.

The Bulwark article, which pointedly seeks to get rid of the freshman congresswoman for her anti-Israeli views, goes on to lament that “Omar’s district is solidly Democratic. No Republican will ever win it. So is America just stuck with a prominent, very vocal, publicity-seeking anti-Semite in Congress for an indefinite period? Is there anything Omar’s critics can do? They need to beat her in a primary. But that must be done carefully… with the right primary opponent, she could be vulnerable in 2020.”

The Bulwark advises that beating Omar requires a perfect candidate and they have just such a person in mind: Minneapolis City Council Vice President Andrea Jenkins. Jenkins is a progressive dream candidate. She is the first transgender African-American woman elected to office in America. Enabling a generously funded and media-friendly campaign are child’s play for the Israel Lobby and the article notes that it would be impossible for Omar to depict herself as the victim of anti-Muslim bigotry in a race against Jenkins.*

The Bulwark’s website features the subheading “Conservatism conserved.” Its article concludes that “Omar and her boosters had better hope that she stops alienating so many people so fast that her opponents could recruit, run, and vote for literally a tree trunk to replace her…” but the interesting point of the story is that while Bill Kristol and company paint themselves as principled America-first conservatives, they are anything but. They are prepared to do what it takes to get rid of a virtually powerless freshman congresswoman who suggested in a tweet that money fuels the congressional bias in favor of Israel, the protection of which is, of course, ever the neocons’ first priority.

It is particularly ironic that Omar’s comment is something that everyone in politics and the media knows to be true about Jewish power in America but is afraid to talk about because of the intimidation coming from people like Kristol. And Kristol and his friends are proposing to get rid of the relatively minor nuisance represented by Omar by running a black transgender “woman” against her to undercut her support on the political left. Politics make for strange bedfellows, but perhaps it is time for the neoconservatives to cut the conservative part out of their own defining label while also removing it from top of the website of The Bulwark.

*It appears that Andrea Jenkins isn’t going along with the neocons’ idea. Minneapolis’ City Pages reports:

“…If a “recruitment effort” does indeed kick off on Minnesota’s right, it’d be funny to watch them try to interact with Andrea Jenkins, a trailblazing transgender success story who spent her whole struggle of a life trying to get past obstacles ‘the right’ put in place, and progressives tried removing. She made it, and is now ensconced in the Minneapolis City Council, fighting for the priorities of her south Minneapolis ward.

“And not, it seems, plotting a run against Ilhan Omar, whom she undoubtedly knows, and admires

I am making a donation to @Ilhan right now. LOL!

How Democrats Can Get Rid of Ilhan Omar https://thebulwark.com/how-democrats-can-get-rid-of-ilhan-omar/ …

“Let’s guess the admiration is mutual. We’d ask Ilhan Omar how she feels about Andrea Jenkins, but we’re going to do the same level of reporting The Bulwark did on its story: almost none at all. At least in this case, we waited to see Jenkins’ response. That “LOL,” is aimed at Liz Mair, her theories, and her editors.

“Their plot to get Ilhan out of office as soon as possible has evidently been foiled, and instantly. Shucks. Twitter giveth and Twitter taketh away, but you’ve gotta love it when a politician who’s overcome every hurdle sends love (and, in this case, money) to another politician who’s overcome every hurdle, all while their enemies stew elsewhere, free of any real information about the local scene….” Read more