You Are Here: Home → No season of goodwill for Christians in the blockaded Gaza Strip

No season of goodwill for Christians in the blockaded Gaza Strip 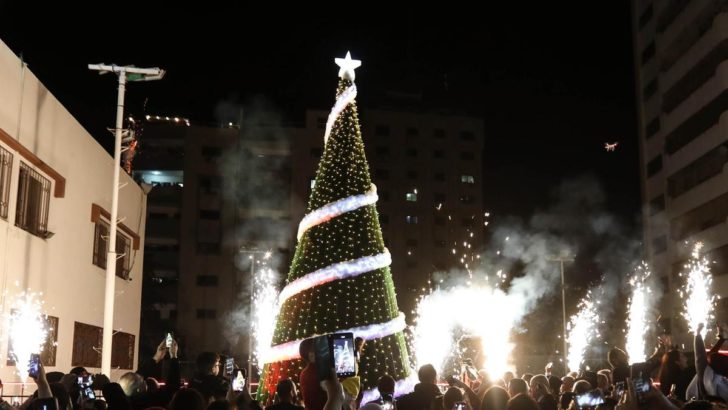 Christmas under siege. Israel announces it will not allow Gaza’s Christians to visit Bethlehem and Jerusalem to celebrate Christmas this year

By
Muhammad Shehada, reposted from The National

For yet another year, Gaza’s tiny Christian community will be forced to mark Christmas under siege.

Separated from friends and family in the West Bank, barred from visiting Jerusalem and Bethlehem’s churches of the Holy Sepulchre and Nativity during one of the most important events in the Christian calendar, and faced with harsh conditions year-round, large numbers are leaving the enclave for safer and easier lives elsewhere.

Gaza’s Christian minority, just like other Gazans, cannot travel between the geographically separated Palestinian territories without petitioning Israel in advance to obtain a security permit. But the process is hardly ever straightforward.

“Every Easter and Christmas, we have to petition for travel through the Palestinian Civil Affairs Ministry, who in turn passes our applications to the Israeli side,” Kamel Ayyad, public relations director of the Greek Orthodox Church in Gaza, told The National.

“We then wait for a long time to receive an arbitrary decision of approval or rejection without further explanation.”

Israel’s decision is often made at the last moment, or even after the celebration is over, Mr. Ayyad said.

On November 7, the Israeli human rights organization Gisha sent a letter to Israel’s Coordinator of Government Activities in the Palestinian Territories demanding it announce holiday permits well in advance.

The co-ordinator responded that “efforts are being made to make sure the announcement is made ahead of time to enable residents to receive the information and submit applications in time.”

However, Mr. Ayyad explained that last Wednesday, the Palestinian Authority informed Gaza’s Orthodox Christians that Israel had agreed to receive applications and asked to be sent a list of petitioners who wish to travel out of Gaza at Christmas.

“We reached out to the Christian community in Gaza, of about 1,050 individuals, and 955 of them petitioned to travel to the West Bank and Jerusalem. We submitted the list on December 12, which is very late already,” he said.

“The whole warmth and spirit of Christmas begin from early December. That’s when we should be reunited with families in the West Bank and visit the Church of the Holy Sepulchre in Jerusalem and the Church of the Nativity in Bethlehem until Christmas,” Samir Abu Nusira, a Christian resident of Gaza, said.

“What good is it if we’re allowed to visit the West Bank only on Christmas Eve when the month is over?”

Christian petitioners in Gaza experience incapacitating measures in the process of obtaining a permit, including age limits, arbitrary selection, and quota systems.

Last Christmas, Israel blacklisted 104 Christians in Gaza, citing security concerns to reject their travel applications. Many reached out to the Palestinian Authority and human rights organizations to explain Israel, but none was given.

Gisha’s director, Tania Hary, said the decrease in the number of holiday permits issued to Christians revealed increased access restrictions between the two parts of the Palestinian Territories and a worsening of Israel’s policy of separation between the West Bank and Gaza.

“It’s easier to get to Bethlehem if you are a Christian from Japan or California than if you are a Palestinian Christian in Gaza, living just a little over an hour’s drive away,” she said.

A whole generation of Gazan Christians is also excluded on age grounds. Only those younger than 16 or older than 35 are eligible to apply for an exit permit, with only a few exceptions made over the last two years.

In practice, this means Israel would usually grant permits to some family members but not the family as a whole. “In some cases, only the mother and a few of her children would obtain a permit, while the father and the rest wouldn’t receive any permits,” Yusef Daher, executive secretary of the Jerusalem Inter-Church Centre, said.

“Under international law, all those measures fall into restricting freedom of religion.”

“In a family of five, when the parents receive permits without their children or the other way around, it often ends up that nobody travels,” Mr. Ayyad said.

Mr. Ayyad explained that Israel further limits the number of those it would allow to leave, even before examining the applications, using a quota system.

“Israel usually announces a quota limited to 500 people,” he said. “However, the number of those successfully receiving the permit is often far less than the quota due to the restrictions Israel imposes on the process.”

Last Thursday, an Israeli official announced another major restriction, according to Reuters, adding that Gaza’s Christians who obtain permits would be allowed to travel to Jordan and beyond, but not the West Bank or Jerusalem.

Last Saturday, the Israeli newspaper Haaretz reported further restrictions; only 100 people would be allowed to travel to Jordan, and the age limit would be raised to above 45 years old. At Easter this year, The National reported similar restrictions made by Israel, which were later lifted.

Gazans were perplexed by this decision, for they have more connection to the West Bank than the outside world.

“I pray they will give me the permit to visit Bethlehem, Jifna, and Birzeit and spend Christmas with my daughter and family,” Randa El-Amash, a Christian resident of Gaza, said. “What matters to us the most is to see our family and loved ones in the West Bank, even if they issue my permit after Christmas.”

Ms. Hary called Israel’s decision outright to deny movement between Gaza and the West Bank this Christmas “a further violation of Palestinians’ fundamental rights to freedom of movement, freedom of religious worship and family life, rights that Israel is obligated to protect.”

Basic rights, not a favor

“Israel continues to frame exit permits it gives during the holidays not as a right but rather as a ‘gesture of goodwill,'” Ms. Hary said.

“More than just a lack of goodwill and a strange way of wishing Palestinian Christians Merry Christmas, this is a deliberate and insidious policy choice designed to fragment the Palestinian population.”

Mr. Ayyad questioned why Israel allows foreign and Arab Christians to freely visit Bethlehem and Jerusalem on holy occasions but make it extraordinarily difficult for Gazans to do so.

“Our most basic rights to freedom of movement and freedom of religion are guaranteed under international law. It’s not a favor. Christmas is as a holy occasion to us as visiting Makkah is for our Muslim brothers.”

The severe movement restrictions under Israel’s permit regime, coupled with a tight blockade in place since 2007, has serious consequences for Gaza’s small Christian community and will eventually make a one-way departure the only option for many.

“The permit system affects family cohesion and causes depression and distress to individuals denied their right to freedom of movement,” Mr. Ayyad said.

“Add to this that Gaza has become unliveable; the blockade affects everyone in all economic, educational, environmental, and health aspects. It pushes everyone to try to leave – Muslims and Christians. But for our already-small and decreasing community, if 50 Christians end up leaving, it would represent a significant decrease in percentage.”

Many Gazan Christians have already left for good, moving to the West Bank, New Zealand, Europe, the US, Australia, and Latin America. Chile alone is home to some 500,000 Palestinian Christians. Before the blockade, Gaza’s Christian population was about 3,000 people. This year their numbers barely exceed 1,050, with a continuing sharp decrease as the siege on Gaza remains in place.

Israel bars Gaza Christians from Easter worship.
Ha’aretz: Why Some Jews Don’t Study Torah on Christmas Eve
Next year in Bethlehem: Gaza Christmas celebrated despite the siege.
Israel is not as Christian-friendly as you think.
Christians in Jerusalem’s Old City ‘under threat’ from settlers