You Are Here: Home → News media get it wrong on the Golan Heights 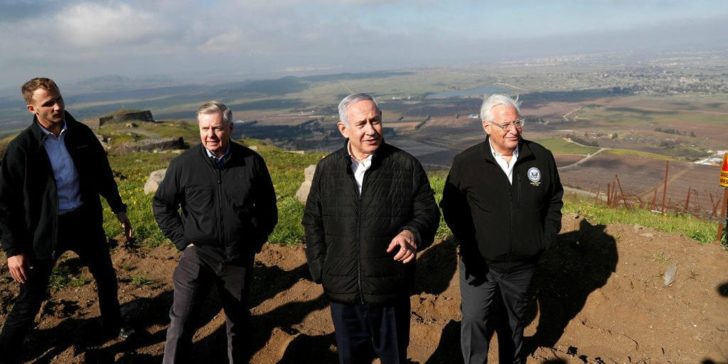 by Joshua Cho, Fairness and Accuracy in Reporting (FAIR)

When the New York Times (3/26/19) reported on Israeli Prime Minister Benjamin Netanyahu’s fait accompli pronouncement that nation-states can now seize territories acquired in defensive wars—after President Donald Trump announced via tweet that the United States asserts Israeli sovereignty over the Syrian Golan Heights—it seriously misled readers on the status of Israel’s illegal settlements on the occupied territories of the West Bank and the Golan Heights.

While the Washington Post’s report (3/26/19) on Netanyahu’s pronouncement made it clear that UN Security Council Resolution 497 in 1981 condemned Israel’s formal takeover of the Golan Heights as “null and void and without international legal effect,” the Times report, by David Halbfinger and Isabel Kershner, obscures the illegality of Israeli settlements by attempting to make “practical and legal distinctions” between the settlements in the West Bank and the Golan Heights.

This is not novel behavior. FAIR (6/26/02) has noted before that despite the lack of direct government interference, as is the case with Israeli media (Jerusalem Post, 7/12/18), the mass media in the United States often offer euphemistic descriptions of Israel’s settlements, pretending that they’re less of a blatant violation of international law than they really are.

It also doesn’t challenge Israel’s practice of bargaining with territories it has no legal claim to in exchange for peace agreements, or explain why Trump and Netanyahu’s fiats cannot serve as a legal precedent for other land disputes, instead choosing to repeat official claims that the Golan proclamation is “an incredible, unique situation.”

Although UN Security Council Resolution 242 is criticized because it doesn’t mention Palestinian rights, its unanimous adoption leaves no room for “dispute” in terms of international law: Israeli settlements on the West Bank, and elsewhere on occupied territory, are in violation of international law, because Resolution 242 explicitly forbids the acquisition of territory by war, in addition to requiring Israel’s withdrawal from all the territories occupied in the 1967 war. Resolution 242 has repeatedly been reaffirmed and added onto, as recently as 2017’s Resolution 2334, which calls for an end to Israeli settlements in Palestinian territories, despite Israel’s quibbling over a missing “the” in Resolution 242 (Al-Jazeera, 11/21/17).

Most notably, neither the Post’s nor the Times’ report question the credibility of the US and Israeli officials used as sources. Political scientist Michael Parenti has pointed out (in Inventing Reality) that one way to spread disinformation and lies is through “face-value transmission,” when reporters convey information known to be false without adequate confirmation or pushback, which FAIR (11/11/15) has already documented concerning the Times’ practice of uncritically spreading deceptive statements made by Netanyahu.

Setting aside the implausibility of Israel’s characterization of the Six-Day War as “defensive” when it began as its own surprise invasion (Real News, 6/4/17), neither paper can square official claims with other official admissions that the 1967 invasion was predicated on lies (Intercept, 6/5/17). Nor do they refer to candid reports in other places (e.g., Wall Street Journal, 2/5/17) admitting that mainstream Israeli political discourse assumes the legitimacy of Israel’s claims to the West Bank, in spite of overwhelming international opposition, and that settlements there are built for the purpose of annexation, in hopes of thwarting the creation of a Palestinian state, instead of for defensive purposes. No questions are raised about the validity of the narrative in which Israel is driven by concerns about security—as opposed to expansion—when Israel in the Syrian Civil War is known to be providing medical treatment to Al Qaeda fighters hostile to Israel’s existence, in an effort to deny a foothold for Hezbollah in the Golan Heights (Jerusalem Post, 3/13/15).

However, the Times failed to report that even if one believes that Israel seized the occupied territories out of self-defense, that still wouldn’t change the illegality of the settlements. Articles 2(4) and 39 of the UN Charter outline the proper procedure for determining and acting on security threats, and they forbid any threat or use of force outside the deliberations and recommendations of the UN Security Council, which were designed to prevent countries from unilaterally deciding to use force (Common Dreams, 6/6/16). Article 51 stipulates that the right to individual and collective self-defense arises when an “armed attack occurs” against a member of the UN, which would make the 1967 war launched by Israel illegal.

To be sure, after the headline (a crucial part of the message of every story) and the first five paragraphs laid out Netanyahu’s claims, the Times article did recognize that “legal experts and leaders of many foreign countries” hold that the prime minister’s assertion of a right to territorial conquest “did not comport with international law.” But the report’s failure to critically examine the conventional media narrative around Israel and its Middle Eastern neighbors, and its face-value transmission of false and irrelevant information given by US and Israeli officials, serve more to downplay the illegality of Israeli settlements under international law than to clarify their legal standing.

Despite what the New York Times would have us believe, there are no relevant “practical and legal distinctions” between Israel’s settlements on the West Bank and the Golan Heights; they are all illegal. Trump and Netanyahu’s argument that occupying territory is justifiable in a “defensive” war is correctly dismissed as absurd by legal experts and the international community.

You can send a message to the New York Times at letters@nytimes.com (Twitter:@NYTimes). Please remember that respectful communication is the most effective.

Action Alert: Tell Congress Golan does not belong to Israel