You Are Here: Home → Netflix series “The Spy” is propaganda, not fact

Netflix series “The Spy” is propaganda, not fact 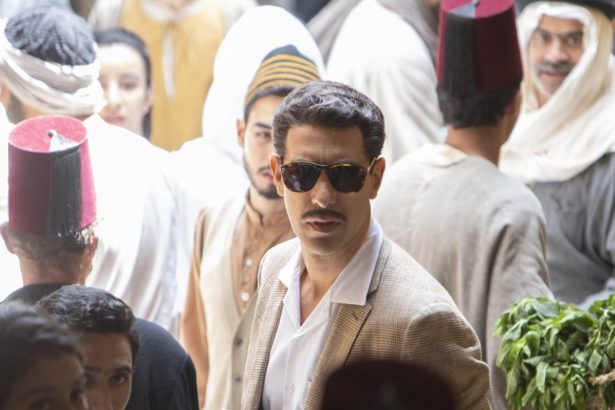 The new Netflix series, “The Spy,” appears to be more fiction than fact as it tells the story of Israeli spy Eli Cohen. The show may be Mossad’s attempt to rescue its reputation after years of botched operations and blown covers.

For too long, Israeli propaganda has gotten away with tall tales about the story of failed spy Eli Cohen.

Cohen was inserted into Syria in 1961 (under a false name) and was discovered and hanged by Syrian military intelligence in 1965.  In another context, this story would have been deemed a disaster for the intelligence agency which recruited this spy. Instead, Israel has managed to spin and fabricate a large volume of lies about Cohen’s ostensible exploits.

Whenever Israeli intelligence suffers defeats and failures it resorts to its past successes and the relationship between the Mossad and Hollywood and has proven to be invaluable for Israeli propaganda.

Netflix seems as closely tied to Mossad as old Hollywood. In addition to a series about Egyptian spy Ashraf Marwan (who Egyptian intelligence still insists was a double agent, although most likely he was not), Netflix has come up with “The Spy,” a series about Eli Cohen starring Sacha Baron Cohen.

This is not the first American film depiction of Cohen: the book, “Our Man in Damascus” (which clearly was a Mossad propaganda work) was also made into a movie years ago.  But Arabs are now more alert to Western distortions and fabrications and have been quite quick to respond to the blatant inaccuracies and lies in the new Netflix series.  One Syrian writer counted 10 historical mistakes in the series, while others said that the movie sets had no resemblances to Damascus whatsoever.

As these critics make clear, the entire premise of the Eli Cohen fictitious plot is a figment of the Mossad’s imagination: that Cohen penetrated deep into Syrian society and government and that he was able, during his first phase while posing as a Syrian immigrant in Argentina, to befriend none other than Amin Al-Hafiz (who later served in key positions in Syria). Israeli and Western accounts talk about him befriending “the president of Syria” (in an Israeli TV interview with Cohen’s widow, they even referred to him as Amin Al-Asad, confusing Syrian leaders).

There is only one problem with that story. As Syrian historian Sami Moubayed writes in Gulf News, Col. Amin Al-Hafiz denied being stationed as a military attaché during the time when Cohen was there. Al-Hafiz arrived in Argentina in 1962, after Cohen’s  departure. And he was not in power when Cohen was in Syria (he was in fact an interior minister and later served as a member of a ruling council).

There is not even a shred of evidence that Al-Hafiz ever met Cohen except in his prison cell because he wanted to ask him questions about his failed mission.   And Hafiz denied categorically those claims of acquaintance (they were made into a friendship in the Netflix series) in more than one TV interview.  The Netflix series also draws upon the worst Zionist Orientalist sexist portrayal of Arabs, including typical Israeli sexual humiliation of Arabs. There is a scene where, as soon as Amin Al-Hafiz meets Cohen, Hafiz’s wife (a conservative woman from Aleppo in real life) immediately reaches over and squeezes Cohen’s genitals.

Once you expose the lies about Al-Hafiz, the entire Cohen myth collapses.

In the 1960s and 1970s the Syrian Ba`th regime did assist the Mossad’s propaganda about Cohen. The Ba`thists of Syria, who had hated Al-Hafiz due to a bitter factional feud, did not want to tell the truth and deny that Hafiz ever met Cohen.  They were not displeased that Israeli propaganda embarrassed Al-Hafiz, who later defected to Iraq and supported Saddam Husayn against the Asad regime.

The Netflix series even introduces the founder of the Ba`th Party, Michel `Aflak, to the story, claiming that he not only knew Cohen but proposed that Cohen hold a party for key leaders on the night of the coup of 1963. `Aflak in the Netflix rendition is a drinking partying man, while in reality he was an austere ascetic known for spending evenings in his modest home.

Much was made by Israeli propaganda of Cohen’s friendship with a senior Syrian military officer, `Abdul-Karim Zahr Ad-Din. Again, there is absolutely no evidence that Cohen ever met him or even saw him. As a 1965 court ruling published in the Syrian paper Ath-Thawrah shows, Cohen knew a nephew of his, Ma`dhi Zahr Ad-Din, but the latter was a recruit who was later discharged and held a low clerical post in the Ministry of Municipal and Rural affairs.  What kind of secret information would an acquaintance with this employee produce?

It is true that Cohen once visited the Al-Himmah area, in the southern part of the Golan Heights, but there is no evidence that he obtained any secret information.  And as Syrian journalist Ibrahim Hmaydi pointed out in the international Arabic paper Ash-Sharq Al-Awsat recently, Cohen operated in Syria before the Ba`thist coup of 1966, and the new regime changed all military plans and personnel leading to the 1967 war.

It was in Israeli interest to claim that Cohen’s espionage was so crucial that it contributed to its decisive victory in 1967.  But the reasons for that outcome are well-known and had nothing to do with secrets. It was because Arab armies were woefully ill-prepared and Israel had a huge advantage of Western military and financial support.  The only evidence of Cohen’s usefulness to Mossad was that he would smuggle Syrian newspapers from Damascus in shipments of Syrian artifacts.  But the brilliant Mossad could have obtained Syrian newspapers from Lebanon with great ease, and without any need for dangerous missions and the use of moustaches for disguises.

Israeli propaganda also claimed that Amin Hafiz (who he never met) offered him the post of deputy minister of defense. And it’s common for Western accounts of Cohen to mention that that he almost assumed this title. But Arab critics are pointing out a problem with that story: The position of deputy minister of defense did not exist in Syria until after the coup of Hafidh Al-Asad in 1970.  The series also puts the chief of Syrian military intelligence, Ahmad Suwaydani, in Argentina at the time of Cohen’s stay when he never served there. It also claims Ahmad Suwaydani was acquainted with Cohen when in reality he was the one who caught him.

Israeli Mossad-Netflix propaganda also carries a purposeful classical Israeli sexual insults to Arabs: the story of Cohen insists that Cohen had 17 or more Damascene female lovers, that he was one of the most eligible bachelors in Syria’s capital city. He was Israeli after all, and Israeli are supposed to be — according to Israeli propaganda — sexually irresistible. But how would Israel know that? Cohen, after all, was its only source in Damascus. Either Cohen invented the idea that he was a sexual magnet for Syrian women (as the Netflix series showed) or that Israeli intelligence made this up after his hanging in order to compensate its ultimate humiliation: having a spy get caught, tried and hanged.

Israeli intelligence has suffered many losses over the years. There was the botched assassination attempt of Khalid Mish`al in Amman in 1997; the assassination of Hamas official, Mahmoud Al-Mabhouh in Dubai in 2010, when Dubai Chief of police released the pictures of all the members of the Mossad hit team and they were circulated worldwide. There are also the failures of Mossad in the face of Hizbullah (and the subsequent discovery of many Israeli spy networks in Lebanon in the last 10 years). All of this has damaged the image of an organization that former CIA Director Admiral Stansfield Turner once said was based more on PR than actual effectiveness.

An intelligence organization that hopes to rescue its reputation through a Netflix series is a desperate organization seeking glory from past — fake — exploits.  Elie Cohen was a failed spy who was not able to secure access to the government or the military of Syria but who sent Syrian newspapers to Israel and ran what appeared to be a brothel in Damascus.

As’ad AbuKhalil is a Lebanese-American professor of political science at California State University, Stanislaus. He is the author of the “Historical Dictionary of Lebanon” (1998), “Bin Laden, Islam and America’s New War on Terrorism” (2002), and “The Battle for Saudi Arabia” (2004). He tweets as @asadabukhalil

Another Day, Another Mossad Assassination