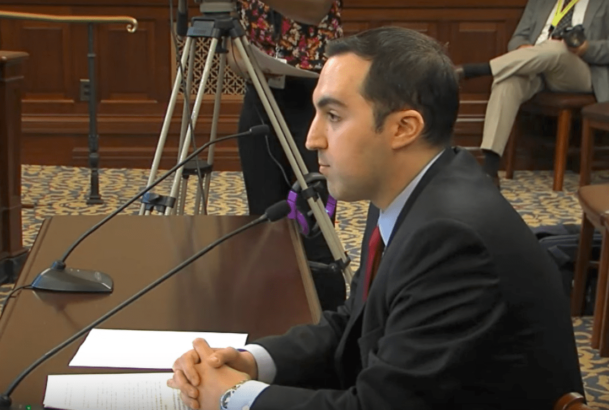 Richard Goldberg, an Israel lobby operative, has crafted a confidential memo pushing for Trump to undertake policies that would destabilize Iran. (This continues strategies recommended by Israeli planners going back to the 1950s.)

After meeting with Benjamin Netanyahu today in New York, Donald Trump told the press, “You’ll see very soon” what he will do with the Iran deal. Meantime, neoconservatives are lobbying the president to decertify Iran’s compliance with the deal, and launch a new era of sanctions against Iran.

A leader of this effort is a young operative from the heart of the Israel lobby, Richard Goldberg, who has worked with Stand With Us and the Foundation for Defense of Democracies, and is now pushing “regime instability” in an influential confidential document. [This is part of a long-standing Israeli strategy to fragment and destabilize countries in the region.]

A report at Foreign Policy by Jana Winter and Dan De Luce, which of course says little to nothing about the Israel lobby, says that opponents of the Iran nuclear deal in Congress and the Trump administration are relying on a Goldberg memo that calls on the president “to threaten an unprecedented economic embargo designed to rattle the regime.”

The memo demands access to Iranian “military sites”– something that has nothing to do with nukes, and something Iran would never agree to.

The document, which has been circulating on Capitol Hill and in the White House, says the president should declare to Congress next month that the deal is no longer in the national security interest of the United States. Then the president would make clear his readiness to hit Iran with a “de-facto global economic embargo” if it failed to meet certain conditions over a 90-day period, including opening military sites to international inspectors.

“This would be a 21st century financial version of [John F.] Kennedy’s Cuba quarantine,” according to a copy of the proposal obtained by Foreign Policy. The embargo would involve reimposing sanctions lifted under the deal, as well as additional measures including restrictions on oil exports.

The unsigned memo was written by Richard Goldberg, a former Republican congressional aide who has long advocated tough action against Iran. The document has been shared with officials in the Trump administration and Republican lawmakers in Congress, sources familiar with the memo told FP.

“This is a hand grenade thrown into the middle of the Iran debate,” said a source who has discussed the proposal with congressional offices.

Secretary of State Rex Tillerson is feeling the pressure. Even he is making the bridge from Iran’s nuclear capabilities to Iran’s supposed threats in the region:

“President Trump has made it clear.… We must take into account the totality of Iranian threats, not just Iran’s nuclear capabilities.”

The Goldberg memo offers a “global economic embargo” that could bring about regime change. Oh excuse me, the words are “regime instability.”

“The President is looking for a path to ‘decertification’ that can build consensus among his national security advisers, especially those who fear the question: what next?” the memo states. “Establishing a credible threat of a total U.S. financial embargo in-waiting would enhance U.S. diplomatic leverage to curb Iranian illicit behavior and allow for a period of further evaluation at the end of the next 90-day period.”

The memo also argues that the threat of a massive economic embargo would need to persuade Iran that it would not have enough time to “break out” and build a nuclear weapon in 12 months before sanctions strangled its economy and threatened the regime’s stability.

“Iran must believe that if the U.S. pursues an immediate global sanctions embargo, the timeline of regime instability and economic collapse could be faster than nuclear ‘breakout,’” it notes.

Goldberg comes out of the pro-Israel community. He worked with the Israel lobby group Stand With Us to oppose BDS, boycott, divestment and sanctions. This profile at the Jewish Federations site in Chicago says Goldberg is about 33 now and that Israel has been at the center of his political activity, from working for Illinois Gov. Bruce Rauner to serving Sen. Mark Kirk, famously called the Senator from AIPAC, to getting Israel new weapons systems.

This spring [2015] he helped Illinois become the first state to pass binding legislation countering the Boycott, Divestment and Sanctions movement against Israel.

Asked how he imagined Chicago’s Jewish community in 2025, Goldberg said: “A community that remains united in strong bipartisan support of the U.S.-Israel relationship and continues to lead the global fight against anti-Semitism.”

Four years ago he undertook another secret memo campaign, trying to demolish Chuck Hagel’s nomination to be Defense Secretary. From Rollcall:

A top aide to Sen. Mark S. Kirk, R-Ill., has been distributing anti-Chuck Hagel emails to a large, undisclosed listserv of staffers — including Democrats — beginning as early as Dec. 20, according to the more than a dozen emails obtained by CQ Roll Call.

Richard Goldberg, a deputy chief of staff in Kirk’s office who also focuses on foreign policy issues, has been sending as many as three emails a day to the list, which CQ Roll Call confirmed includes reporters, Republican policy staffers and some Democrats.

At the time Goldberg tweeted:

Goldberg was a fellow at the neoconservative Foundation for the Defense of Democracies and has worked closely with that organization to come up with a “lethal weapon” to fight Iran, says Clifford May of the Foundation:

Eventually, [FDD director Mark] Dubowitz, working with Sen. Kirk’s then-deputy chief of staff Richard Goldberg, came up with a “financial bomb”: a Belgium-based financial firm called SWIFT, “which hosts the international computer network that facilitates virtually every banking transaction in the world through an extensive messaging and financial tracking system.” The Obama administration opposed expelling Iran from SWIFT but “Congress once again overrode the White House’s concerns and unanimously passed” legislation in 2012 that “de-SWIFTed” Tehran.

Trita Parsi in Huffington Post says the effort to destroy the deal has shifted the focus from Iran’s nuclear activities to its actions in the region, and that this represents a bait and switch on the “existential” threat Iran supposedly poses:

Now, Washington’s hawks and Netanyahu are complaining about the nuclear deal’s singular focus on Iran’s nuclear activities. The real threat is Iran’s regional “expansion,” they suddenly claim. Allowing the nuclear deal to restrain the U.S. from confronting Tehran in the region, or allowing sanctions relief to proceed under these circumstances, would not serve U.S. national security interests, the Trump administration argues.

It is not invalid to point out that the sanctions relief put an end to more than three decades of U.S. efforts to completely isolate and contain Iran. That argument, however, cannot be combined with the central assertion made by Netanyahu and Washington hawks in the past: That Iran’s nuclear program constitutes an existential threat.

If the hawks truly believed in that contention, they would not complain about the nuclear deal’s singular focus on this existential threat. They would celebrate it.

Today’s Times has a story about yet another aspect of the neoconservative push: the effort to use the Holocaust Memorial Museum as a means of citing Syria, Iran’s close ally in the region, for “genocide.” The influential actors here are Elliott Abrams and Leon Wieseltier. They got a report the museum had made on the Syria case pulled because it argued that President Obama would not have helped the situation by taking military action against Syria.

Update: Annie Robbins was on to Richard Goldberg’s importance five years ago, when he was running Senator Kirk’s foreign policy at a time when the senator was incapacitated. He had teamed up with AIPAC, the leading Israel lobby group, and given a speech to graduates of a Jewish school in his home town, Skokie, IL, describing his recent trip to Israel:

After meetings with Prime Minister Netanyahu, Defense Minister Barak, IDF Chief of Staff Gantz and many others, I can tell you one thing for certain – Israel needs you now more than ever.

Philip Weiss is Founder and Co-Editor of Mondoweiss.net, where this article was originally published.

Trump’s ‘Muslim’ ban: Israeli strategic plans to “remake the Middle East” from 2001 and before targeted the same countries