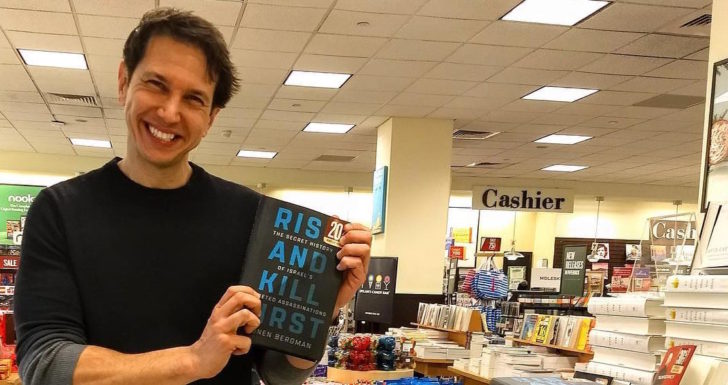 Author Ronen Bergman lavished praise on AIPAC for ‘having Israel’s back’…  4 New York Times writers have had sons in the Israeli military; current Times columnists Roger Cohen, Bret Stephens and David Brooks are proudly Zionist; opinion editor Bari Weiss comes out of a career as an Israel advocate, and her father is a stalwart at AIPAC…

Ronen Bergman, a staff writer for The New York Times Magazine, gave a talk to the Israel lobby group AIPAC in White Plains Monday night and lavished praise on AIPAC for its support of Israel.

“You know, I’ve been all over the U.S. with AIPAC and it’s always a great pleasure, as an Israeli. I always tell AIPAC, you do so much in the U.S., and I know that Israel is not the spirit of where you work, but you need to do a little more to explain to Israelis how much they owe AIPAC. Israelis are not aware. I am aware… I know that you’ve got our backs. It’s such a great feeling.”

AIPAC, the American Israel Public Affairs Committee, is famous for its work to prevent any “daylight” between the U.S. government and the Israeli government on policy and maintain support for Israel in the U.S. Congress. It has been the subject of numerous investigations– generally not in the US mainstream press, and certainly not the New York Times.

Bergman’s praise for AIPAC is in the tradition of New York Times support for Israel and its lobby. Former executive editor Max Frankel said he wrote all the paper’s editorials on Israel when he was editor of that page. “I was much more deeply devoted to Israel than I dared to assert,” he wrote in his memoir. Four New York Times writers have had sons serve in the Israeli military. Times columnists Roger Cohen, Bret Stephens and David Brooks are proudly Zionist. Opinion editor Bari Weiss comes out of a career as an Israel advocate, and her father is a stalwart at AIPAC. [A few other NY Times pro-Israel journalists have been Judi Rudoren, Daniel Okrent, Ethan Bronner, Isabel Kershner]

Per my internet searches, Bergman spoke in Cleveland at the behest of AIPAC in 2014; and reportedly appeared at this event in Columbus, Ohio, with AIPAC also in 2014.

The investigative reporter works for Israel’s largest newspaper Yedioth Ahronoth and has many sources in the Israeli government. While we have given props to Rise and Kill First, Bergman’s recent book on Israeli assassinations, as revelatory and gripping, he tends to support Israeli government positions. In his talk, Bergman said that Israel’s policy of assassinations may be illegal but it has worked.

“I know maybe that it’s not a popular view by some people in this country and in Israel as well, but after eight years of research, I can with definite assurance say that, in some cases in history… when it’s done without letting the enemy rest for one minute, when it’s done against the people that should have been killed not against the people that can be killed, yes targeted killings are effective and can change history.”

He said that many Americans’ understanding of Israeli assassinations is based on the 2005 Steven Spielberg movie Munich, but it’s inaccurate, Spielberg was hoodwinked.

This movie is 100 percent fake news. It is not really true. Now of course there were enemies who were killed and afterwards there were sometimes people dropping dead in Europe, but all the rest, the methods, the… command and control, the hierarchy, who did that, is just 100 percent fake news.  Steven Spielberg fell victim to a crook by the name of Yuval Aviv, an Israeli claiming to be Avner, the commander of the Mossad assassination unit, but in fact behind it all he was the commander of a shift of baggage selectors at Ben Gurion Airport.

The talk was titled, “Redactions Revealed.” Bergman referred to all the jokes about killing Palestinians and Arabs that Israeli agents make in his book. Saying that “Israelis have sometimes black humor,” he quoted a Mossad source who called Bergman on the day in February 2008 that Imad Mughniyah of Hezbollah was assassinated in Damascus by detonation of a bomb hidden in the spare tire cover of his Mitsubishi Pajero. When the source told Bergman the news, Bergman said, “You sound sad. Why are you speaking with a heavy voice?” The source said, “Ronen, I’m very sad…. It was a grand Pajero [car].” The hall resounded with laughter. The quote is not used in Bergman’s book, apparently because it was redacted by the Israeli government.

Off The Charts: Report On New York Times Israel/Palestine Coverage