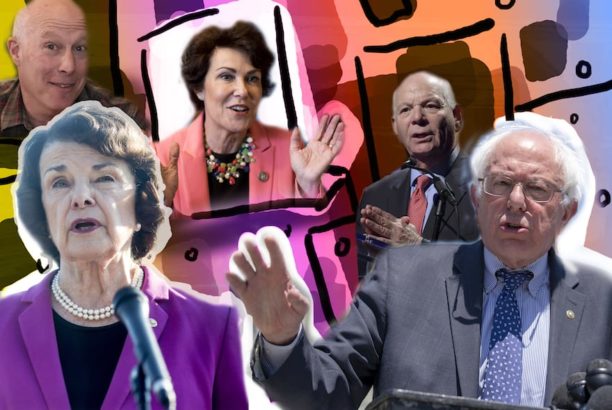 The Jewish Telegraphic Agency published a report on Jewish candidates that found their stances on Israel are mixed… Some staunchly defend Israel, some are among Israel’s most outspoken critics, some barely registered on the Israel spectrum… Boldfaced sections below show each candidate’s views/actions regarding Israel

According to the Jewish Telegraphic Agency (JTA) there are 55 Jewish American candidates for Congress and an additional five with strong Jewish connections. The report points out that while Jewish Americans make up less than 2 percent of Americans, they comprise 6 percent of the candidates.

JTA reports that their stances on Israel range from”centrist Democrats who staunchly defend Israel, leftist Democrats among the Jewish state’s most outspoken critics and Democrats who barely register on the Israel spectrum.”

Following are the Democratic Senate Nominees’ records on Israel:

As American progressives have begun to learn more about the Israeli Palestinian issue, Feinstein has become more critical of Israel, taking a liberal Zionist position. She has called on the Israeli government not to demolish Palestinian homes. J Street, the pro-Israel group that is a softer version of AIPAC, has endorsed her.

Cardin is from a prominent Jewish family. A relative is Shoshana Cardin, the first woman to chair the national umbrella body of the Jewish federation movement and the powerful Conference of Presidents of Major American Jewish Organizations. She was served as chairwoman of the National Conference of Soviet Jewry, the Associated Jewish Charities and Welfare Fund of Baltimore, on the boards of the American Jewish Joint Distribution Committee, United Israel Appeal and United Jewish Appeal, and president of the Jewish Telegraphic Agency.

Cardin is reliably pro-Israel and defended an anti-boycott law. NORPAC, a New Jersey political action committee and JACPAC have backed him.

Prior to 2016, Rosen’s only political experience was being president of her synagogue.

JTA reports: “Rosen has taken a typically centrist pro-Israel line, saying she would have opposed the 2015 Iran nuclear pact. Heller is backed by Sheldon Adelson, the casino magnate and pro-Israel and Republican giver who helped lead opposition to the deal. She has been endorsed by center-right pro-Israel PACs as well as JACPAC. She’s an “On The Street” candidate for J Street’s PAC, which means she does not accept the PAC’s money but does allow it to direct individual donors her way.”

JTA reports: “He has since his presidential campaign become a leading Senate critic of Israel, posting multiple videos on social media criticizing how Israel is handling the crisis across its border in the Gaza Strip. He has the endorsement of J Street’s PAC and was the star of J Street’s annual conference this year. While critical of Israel, Sanders opposes BDS and emphasizes his demand that Arab states recognize Israel’s existence.”

Trauner, who was born in New York, is a financial entrepreneur. He attended Jewish political fundraising events during his House runs, but there is no record that he has received money from pro-Israel PACs. Since his is campaign website does not address foreign policy, his position on Israel is unknown.

Read the full JTA report, which contains additional details about each candidate, here.

[If Americans Knew will soon publish our own report on the upcoming midterm elections, which will contain information on all candidates’ positions on Israel]