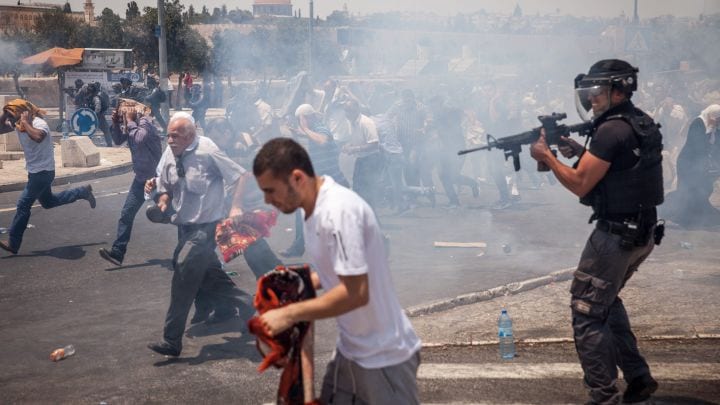 Everybody has heard about the Palestinian attack on Israeli guards in Jerusalem on Friday July 14th. Two Israeli guards were killed, three were injured and the two Palestinian attackers were killed. Some of us have heard about the two-day shut-down of Al-Aqsa mosque following the incident, the installation of metal detectors, and boycott by Muslims in protest of the metal detectors.

And today, July 21st, widespread demonstrations took place all over the West Bank: tens of thousands came to worship on the street, refusing to pass through the metal detectors as a matter of principle. Israeli security forces confronted the demonstrators, injuring close to 200 and killing three.  (For comparison, note that 4 Israeli officers were wounded during the “clashes.”)

But almost nobody has heard that on Tuesday, July 18th, after the mosque complex reopened, the spiritual leader and imam of the Al-Aqsa mosque was shot.

A group gathered in the street near the entrance to the mosque complex on Tuesday night to pray. Sheikh Ikrima Sabri led the prayer, after which some worshipers stayed to protest. Israeli police used tear gas, concussion grenades, and rubber-coated steel bullets to disperse the crowd. Dozens of Palestinians were injured–including Sheikh Sabri—some seriously.

(Just an aside: rubber bullets are not as innocent as they sound—they don’t bounce off of victims. During the 2014 Ferguson unrest, there was much discussion about the use of this type of bullet. Researchers interestingly sought data from Israeli hospital records, where they found that in October 2000, 19% of 152 patients had “severe wounds,” and 3 were permanently blinded by rubber bullets. In addition, at least 20 Palestinians were killed by rubber bullets between 1987 and 1993.)

The shooting of Sabri, the highest level imam in Jerusalem, is significant–but it was left out of all mainstream media that day and every day since. Was there too much to report on, and the story was “buried”? What else happened in Israel or Palestine on Tuesday?

Mainstream media reported only one other incident. It was listed under “top stories”:

(Reuters) – “A Palestinian driver rammed his vehicle into a group of Israeli soldiers in the occupied West Bank on Tuesday and was shot dead by the troops, the Israeli military said.”

A cursory glance at local newspapers in the Palestinian territories demonstrates that it was actually a very busy news day—and not in a good way.

Imagine being a Palestinian and seeing this going on around you:

Close to the brink

In any given month in 2016, Israel held 6,000-7,000 Palestinian prisoners, at times over 400 of them minors, and 500-700 of them administrative detainees. Administrative detention involves neither charge or trial. International law stipulates that, because the practice causes “substantial injury to due process,” it must be used only as a last resort; however Israeli authorities use it on a regular basis—60% of the time renewing the orders multiple times consecutively.

This laundry list of unpleasantries (no doubt incomplete) is par for the course on any given day in the Occupied Palestinian Territories, but is virtually unknown in the West. Add to it the permanent roadblocks—sometimes closed and impassable—that delay Palestinian travel to work, school, and medical treatment, the wall that separates families, the water and electricity shortages (especially severe in Gaza), and many more daily oppressive actions by Israel. In addition, Palestinians are now dealing with the shooting of Jerusalem’s spiritual leader, Sheikh Sabri (while the world looks the other way). Palestinians are being pushed closer and closer to the brink of some kind of retaliation. When that retaliation happens, it will be broadcast widely of course, and will be portrayed as if it came out of nowhere. Clearly that is not the case.

The Palestinian narrative must be taken seriously; their right to resistance must be recognized. Imam Sabri, who was shot on Tuesday night, is recovering now, and gave a very ominous, very significant warning:

I want to tell Israel and the world that if Israel wants peace they have to immediately remove the metal doors and other security obstacles they put in the last week…Otherwise the situation will explode and all the possibilities are open. And don’t say we didn’t tell you.

If things don’t improve quickly enough, and another intifada starts (or worse), let us remember what a day in the life of a Palestinian looks like, the pressure they endure, and their right to resist. There is only so much that we in the West can do to stop the escalation, end the injustice, and restore peace, but this much we can–and must–do:

Support BDS (Boycott, Divest, and Sanction) and urge our congressmen (both national and state) to allow people to boycott whomever they please without fear of reprisal