You Are Here: Home → Arab Daily News: Violence in Israel defined by hypocrisy and race 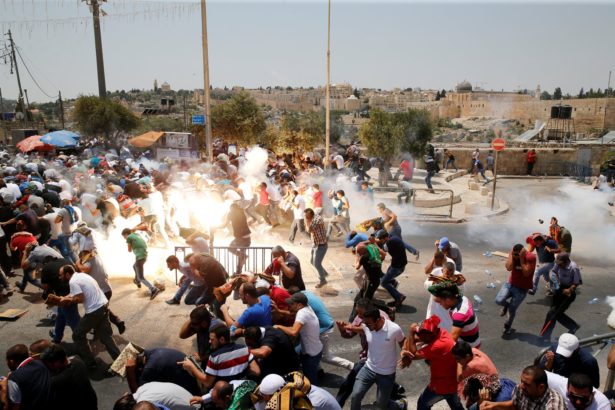 Israeli soldiers fired tear gas at Palestinians to disperse them after Friday Prayer on a street outside Jerusalem’s Old City. Credit Ammar Awad/Reuters

Israel spotlights violence when it is committed by Palestinians and plays it down when it is committed by Israeli Jews or settler fanatics. Even the punishments are different, with Christians and Muslims being punished to the extreme while Israeli Jews and settlers are often given a pass. The homes of family and relatives of Palestinians accused of crimes are destroyed by Israel, but Israel does not punish the families or relatives of Israeli Jews. To see the shocking difference in morality in the deaths, visit the website www.IsraelPalestineTimeline.org

Last week, the mainstream American news media was inundated with stories about two Israeli police officers killed by three Palestinians near the al-Aqsa Mosque and the Dome of the Rock in occupied East Jerusalem.

The violence took place on Friday July 14 at the entrance of the al-Haram Ash-Sharif, which the Israelis and the pro-Israel media refer to as “the Temple Mount.”

Many Israelis were shocked that the suspects were Israeli Arabs, rather than Palestinians living in the Israeli occupied West Bank.

Israeli officials are considering whether or not to apply Israel’s racist policy to destroy the homes of the accused assailants to punish their families. Israel does that to the family homes of Palestinians from the occupied West Bank accused of violence, but not to Israelis convicted of terrorism.

There was very little coverage of the killings. There was no Israeli inquisition into the facts. Despite the cold blooded civilian murders, no one in Israel’s government called for an investigation or any retribution or consequences.

There is a website online called IsraelPalestineTimeline.org which uses data distributed by the Israeli civil rights organizations B’Tselem and lists every person killed on both sides.

In explaining what they do, the authors write, “This website includes every death we can find reported. While Israeli deaths, fewer in number, are reported widely and in great detail, it should be noted that Palestinians are frequently killed in large numbers during military incursions, and reporting agencies don’t always have adequate access to ensure they haven’t missed anyone.”

According to the site, which is affiliated with “If Americans only Knew,” (www.IfAmericaKnew.org), at least 43 Palestinians (13 of them children) and 10 Israelis have been killed by someone from the other side in 2017.

The site notes that on the same morning, July 14, a 21 year old Palestinian, Bara’ Ismael Hawamda, 21, was killed by Israeli soldiers during a raid on the Deheishe Palestinian refugee camp which is located just south of Bethlehem.

Clearly driven by media bias, which showcases the killing of Israelis and ignores the killing of Palestinians, American politicians were quick on their feet to defend heightened Israeli security measures and to demand justice.

But there was no call for “justice” in the wake of the killings of the two young men from Jenin or the Palestinian killed outside of Bethlehem, which is the birthplace of Christianity and is under Israeli military siege.

Israel’s moderate President Reuven Rivlin expressed anger against Israel’s non-Jewish population for failing to speak louder in denouncing the attacks near the al-Aqsa Mosque. But his office was silent on the Israeli military killings in Jenin.

No American journalist who cares about his career would dare to make these points in their columns that fill the editorial pages of more than 1,300 daily newspapers in America. But many of these newspapers ran columns denouncing the murder of the Israelis.

That’s easy to do in a nation like America that has so little regard for life when the victims are Arab, or in Israel where the facts prove overwhelmingly that far more Palestinians are murdered by Israelis than Israelis murdered by Palestinians.

It shouldn’t be, but only in Israel is there hypocrisy in murder, death and destruction. In Israel, justice depends on your religion, not on international Rule of Law that governs everyone else.

Ray Hanania is an award winning columnist and author, and Managing Writer at the Arab Daily News