You Are Here: Home → The latest in Israel’s strip-searching of women & children

The latest in Israel’s strip-searching of women & children 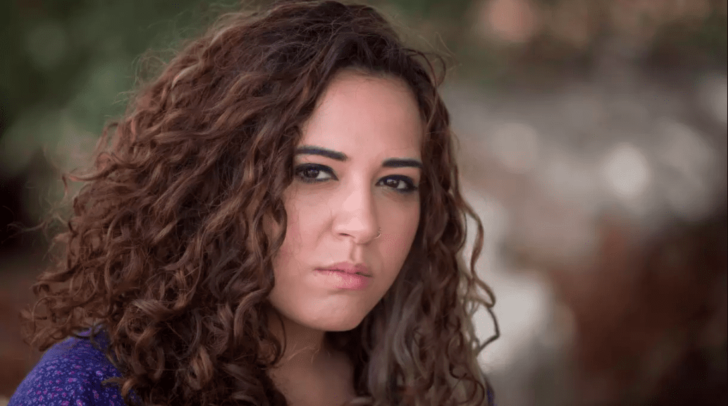 In a previous, 2016 incident, Palestinian student leader Diran Shalabneh (above) was strip-searched when she arrived for a meeting at the Prime Minister’s Office.

Israel has long been strip-searching women and children, a policy that U.S. media sometimes cover up, from AP to Democracy Now. A Palestinian-Finnish journalist recently refused to submit and was prohibited from covering the Pence event in what the Foreign Press Associated called “ethnic profiling”

A press organisation in Israel has accused the authorities of “ethnic profiling” after a female Finnish journalist whose father is Palestinian, was told she had to undergo a strip search if she wanted to cover an event that was part of the visit of US Vice President Mike Pence.

The Foreign Press Association (FPA) in Israel said the journalist from Finland’s state broadcaster, who is accredited by the government press office, was taken behind a curtain at Prime Minister Benjamin Netanyahu’s office, where she said she was questioned, patted down, and then asked to remove her bra for an inspection.

She reportedly refused to do and was prevented from covering the event. 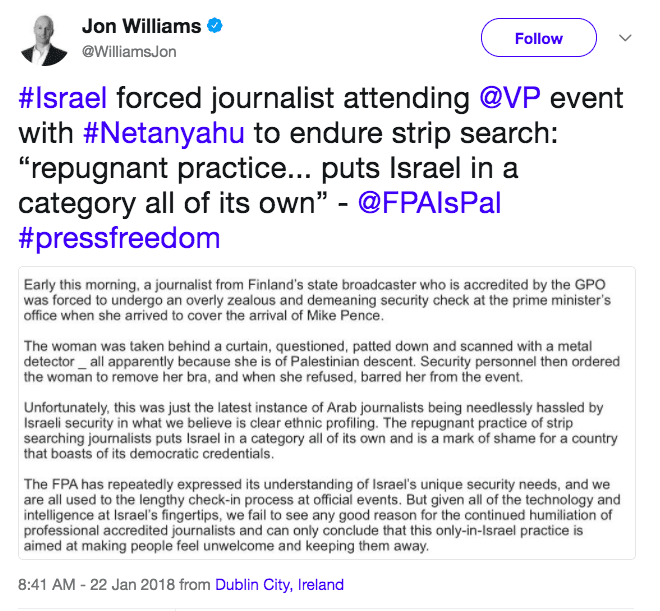 “Unfortunately, this was just the latest instance of  journalists being needlessly hassled by Israeli security in what we believe is clear ethnic profiling,” the FPA said in a statement.“The repugnant practice of strip searching journalists puts Israel in a category all of its own and is a mark of shame for a country that boasts of its democratic credentials.”

The organisation, who represents around 400 journalists working for international media in Israel and the Palestinian territories, said it had repeatedly expressed its understanding of “Israel’s unique security needs”.

“But given all of the technology and intelligence at Israel’s fingertips, we fail to see any good reason for the continued humiliation of professional accredited journalists and can only conclude that this only-in-Israel practice is aimed at making people feel unwelcome and keeping them away,” it added.

The alleged incident is said to have taken place as Mr Pence told Israel’s parliament that the US Embassy will move to Jerusalem by the end of 2019, an announcement that earned him a rousing ovation,

The plan to accelerate the move of the embassy, announced in the first address of a sitting American vice president to the Knesset, marked the highlight of Mr Pence’s three-day visit to Israel celebrating President Donald Trump’s decision last month to recognise Jerusalem as Israel’s capital.

“The United States has chosen fact over fiction – and fact is the only true foundation for a just and lasting peace,” said Mr Pence, according to the Associated Press. 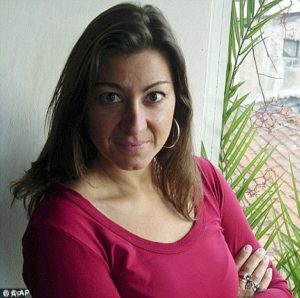 DAILY MAIL: Pregnant U.S. war photographer strip-searched after she asked not to go through X-ray machine at Israeli border

…A pregnant U.S. photographer has claimed she was strip-searched and humiliated by Israeli soldiers during a security check.

Lynsey Addario had requested not to go through an x-ray machine as she entered Israel from the Gaza Strip because of concerns for her unborn baby.

Instead, she wrote in a letter to the ministry, she was forced through the machine three times as soldiers ‘watched and laughed from above…’ Read full report