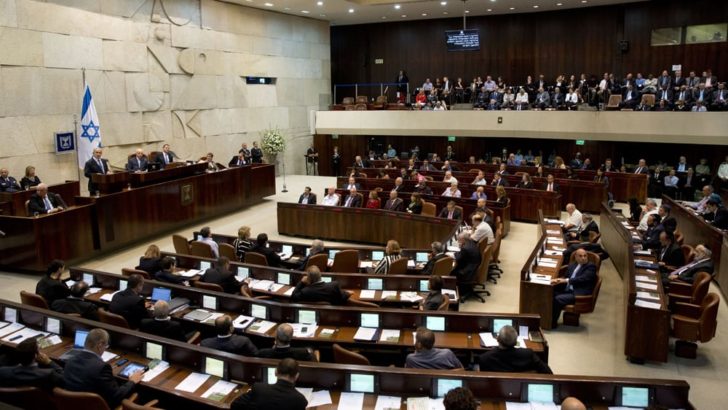 The Nationality Bill, first introduced in 2013, seeks to enshrine as a Basic Law the concept that Israel is the nation-state of the Jewish people.

[During the most recent Knesset discussions of the bill, the following were some of the comments by legislators (15% of Knesset members are Arab; 20% of Israeli citizens are Arab):

MK Osama Sa’adi (Arab, Joint List Party) said, ”This is one of the most dangerous laws in the delicate relations between the Jewish majority and the Arab minority. What is absent from the law is more severe than what it contains. This law excludes the Arab minority, which is 20%, from the first letter to the last, as though we do not even exist. And then people wonder why the Arab public is not loyal. You are pushing us against the wall. You are inserting the term democracy as lip service. Nothing is left of it.”

MK Roy Folkman (Jewish, Kulanu Party) said ”I want to understand why the word `equality` will not be included in the legislation.”

MK Dov Khenin (Jewish, Joint List Party) said, ”The Arab voice is noticeably missing from this debate. This law is an anti-constitutional and anti-democratic revolution. I don’t know where those who claim that the state’s Jewish character is eroding are living…The Jewish religion controls every aspect of life, so we need to strengthen this even more?”

MK Hanin Zoabi and MK Jamal Zahalka (both Arab, Joint List Party) were removed from the assembly for repeatedly interrupting MK Avi Dichter as he spoke. Zahalka yelled, “This is apartheid, apartheid, apartheid,” and also called Dichter, who proposed the bill, a “fascist.”

Earlier in the week, PM Netanyahu addressed the controversy, claiming that “there is no contradiction between the bill and the equal rights of all citizens of Israel.”

Important issues that the bill addresses include:

– The State of Israel is the national home of the Jewish people, in which they realize their aspiration to self-determination in accordance with their cultural and historical heritage

– The purpose of this Basic Law is to defend the character of Israel as the nation-state of the Jewish people, a Jewish and democratic state

– The state anthem is “Hatikvah,” the state flag is white with two blue stripes and a blue Star of David, the state emblem is a seven-branched menorah with olive leaves and the word “Israel”

– Jerusalem is the capital of Israel; Independence Day is the national holiday of the State

– The state’s language is Hebrew; the Arabic language has a special status

– Every Jew has the right to immigrate to the land [of Israel] and acquire citizenship; the State shall act to gather in the exiles of Israel]

On Wednesday, Amsalem replaced MK David Bitan, who stepped down from the position, amid a corruption investigation against him.

“The first mission of the coalition chairman, MK Amsalem, will be to pass the nationality bill, one of the most important pieces of legislation that will enter Israel’s history books,” Netanyahu said, according to Days of Palestine.

The bill proposal, first submitted 4 years ago by Likud MK Avi Dichter, seeks to enshrine, as a basic law, the concept that Israel is the nation-state of the Jewish people. The legislation determines that all Israeli law must be interpreted according to this principle.

As discriminatory towards Arab-Israelis (the Palestinians who remained home during the Israeli ethnic cleansing in the 1940s), the bill specifies some of the practical aspects of Israel being the nation-state of the Jewish people.

It recognizes and prioritizes the Judaization of state symbols, claims Jerusalem as the capital, Hebrew as the official language, the right of Jews to easily migrate to Israel, Jewish settlement, relations with the Jews abroad, the Hebrew calendar and holy sites.

Netanyahu requested to complete a first reading before the Knesset adjourns for the summer. However, Eyal Yinon, the Knesset’s legal advisor, informed Knesset Speaker Yuli Edelstein that a proposal such as this cannot be advanced on such a short schedule.

Is Israel an Apartheid State? Rhetoric or Reality?