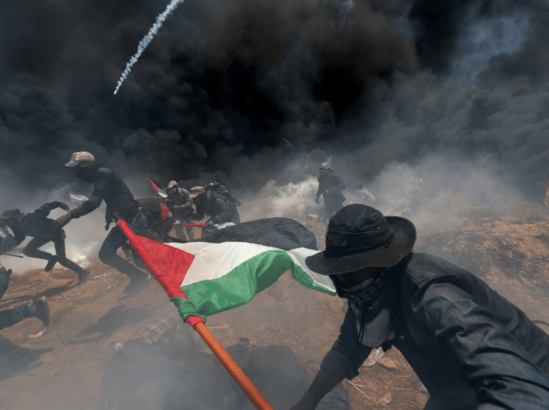 Saree Makdisi, author of Palestine Inside Out, writes boldly and succinctly about the program of ethnic cleansing upon which Israel as a whole, and the ongoing Gaza massacre, are built: it’s all about Jewish identity and Jewish majority.

Two spectacles unfolded in Palestine on Monday [May 14th, 2018].  In Gaza, Israeli army snipers shot and killed 58 Palestinians—including six children—and injured almost three thousand others amid scenes of smoke, fire, teargas, dust, agony and blood.  At exactly the same time, to the tinkling of champagne glasses at a glittering reception barely fifty miles away in Jerusalem, Jared Kushner and an elegant Ivanka Trump oversaw the opening of Donald Trump’s new embassy there.  The juxtaposition of these two contemporaneous scenes encapsulates at a single glance the entirety of Zionism’s murderous conflict with the Palestinian people.

The Palestinians targeted and executed one-by-one by Israeli snipers had gathered to demand their right of return to their lands and homes inside the rest of Palestine, from the coastal plain up to and including Jerusalem.  They or their parents or grandparents were driven from their homes during the Zionist ethnic cleansing of Palestine in 1948 for the simple reason that they are not Jewish: too many non-Jews in the putative Jewish state would not make for much of a Jewish state after all.  (“There could be no Jewish state with a large and hostile Arab minority in its midst.  There would be no such state.  It would not be able to exist,” the Israeli historian Benny Morris bluntly pointed out in an interview justifying ethnic cleansing with the newspaper Ha’aretz in 2004; “a Jewish state would not have come into being without the uprooting of 700,000 Palestinians . . . [therefore] it was necessary to uproot them”).  They have been denied the right to return to their homes ever since for the same reason: they are not Jewish, and their presence would upset the carefully-engineered demographic tables maintained by the state to preserve its tenuous claim to an exclusively Jewish identity.  The maintenance of that demographic balance and the suspension of their political and human rights are inseparable from one another: the one enables, produces and requires the other.

Killing is built into the plan

The demographer Arnon Sofer of Haifa University is the architect of the current isolation of Gaza.  In 2004, he advised the government of Ariel Sharon to withdraw Israeli forces from within Gaza, seal the territory off from the outside world, and simply shoot anyone who tries to break out.  “When 2.5 million people live in a closed-off Gaza, it’s going to be a human catastrophe,” Sofer told an interviewer in the Jerusalem Post (11 November 2004); “Those people will become even bigger animals than they are today, with the aid of an insane fundamentalist Islam.  The pressure at the border will be awful.  It’s going to be a terrible war.  So, if we want to remain alive, we will have to kill and kill and kill.  All day, every day.”  He added that “the only thing that concerns me is how to ensure that the boys and men who are going to have to do the killing will be able to return home to their families and be normal human beings.”

This imperative to kill and kill and kill human “animals” explains the violence taking place at the gates of Gaza—which has been sealed off precisely according to Sofer’s prescription—for the past several weeks, most calamitously this Monday.  The killing now taking place is, in other words, exactly, to the letter, the “killing and killing and killing” he called for fourteen years ago.  Calmly premeditated and intentionally designed by its architect, it is equally calmly and intentionally being carried out by Israeli soldiers (about whose psychological traumas I, unlike Sofer, am not even remotely interested).  In response to the current killing and shooting, a senior member of the Israeli parliament, Avi Dichter, reassured his audience on live television on Monday that they need not be unduly concerned.  Their army, he told them, “has enough bullets for everyone.”  If every man, woman and child in Gaza gathers at the gate, in other words, there is a bullet for every one of them. They can all be killed, no problem.

Remember Kurtz in Heart of Darkness? “Exterminate the brutes!”  The genocidal intent expressed by the likes of Sofer and Dichter—mainstream and senior figures in Israeli politics—is so obvious as to make assiduous interpretation of their words unnecessary.  The people of Gaza are exterminable because they are not Jewish: that is what the situation amounts to, not according to critics of the siege of Gaza, but according to its architects, planners, enablers and supporters.  For that exterminability, and the ability to calmly and methodically transact it (“kill and kill and kill”) guarantees one thing, according to Sofer (in that same interview): “it guarantees a Zionist-Jewish state with an overwhelming majority of Jews.”  To be clear then: according to its own planners and architects—these are their words, not mine—the maintenance of a “Zionist-Jewish” state fundamentally requires the Israeli army to prepare itself with a bullet for every man, woman and child in Gaza, and to shoot them one by one if they approach the gates penning them in.  And if none of them are left after the smoke clears, well, so much the better; Israeli “boys and men” will return to their families and sleep better at night for not having to kill them any longer.

Privilege and its opposite

But acts of birth are randomly distributed by the hand of fate.  And fate played one hand to Jared Kushner and a different hand to Ezzedine al-Samaak (14 years old), Ahmad al-Shair (16 years old), Said al-Khair (16 years old), Ibrahim al-Zarqa (18 years old) and Iman al-Sheikh (19 years old).  They were all born in Gaza, refugees and the children of refugees driven by Zionist shock troops from their homes elsewhere in southwestern Palestine in 1948.  Unlike Jared Kushner, who was in Jerusalem because he is Jewish, they cannot go to Jerusalem, because they are not Jewish.  Unlike Jared Kushner, who can go to Jerusalem whenever he wants in the future because he is Jewish, they will never go to Jerusalem because they were shot in the head by Israeli army snipers on Monday and they are now all dead.  Having robbed them of their past and their present, the state of Israel stole their future as well.  And it did so—it could do so—simply because they are not Jewish.

There is a direct link between the events in Jerusalem and those taking place in Gaza; Netanyahu himself pointed it out. “We are here in Jerusalem, protected by the brave soldiers of the army of Israel,” he said at the opening ceremony on Monday, “and our brave soldiers, our brave soldiers are protecting the borders of Israel as we speak today.”  By “brave soldiers,” of course, he meant cowardly snipers hiding in reinforced positions and shooting unarmed civilians at a distance of 1,000 meters; and by “protecting” he meant killing and killing and killing, exactly according to Dr. Sofer’s prescription.

There are two racial groups in close proximity in Palestine.  The members of one racial group—the one to which Netanyahu and Kushner belong—are free to come and go as they please, to live life, to travel, to study, to work, to raise children.  The members of the other racial group are to varying degrees denied those rights, though nowhere more starkly and abjectly than in Gaza, where over two million people have simply been rounded up and warehoused without prospects or hopes, let alone rights, simply because their very existence is deemed to be a mortal threat to the exclusive racial identity of a state that was violently established on their land and at their expense.  To maintain the exclusive identity of that state, these people must either accept their fate as essentially human cargo in permanent storage—a superfluous population—or take the bullets that the Israeli army has prepared for each one of them.

And that, fundamentally, is what Zionism’s conflict with the Palestinians is all about.  At few other moments than the present has the juxtaposition between the racially privileged and the racially dehumanized and exterminable been so crystal clear.  Liberal Zionists like Peter Beinart or Roger Cohen may wring their hands and bewail the crude and explicit viciousness of Netanyahu and his circle or the hideousness of the spectacle unfolding at the locked gates of Gaza.  They harken back to the golden days of the 1950s and 1960s, when the Palestinians seemed (to the fevered Zionist imagination) to have quietly vanished, as though by magic.  But what is happening today is not an aberration.  This is what Zionism has always entailed and what it will always entail.  “Colonialism is not a thinking machine, nor a body endowed with reasoning faculties,” Frantz Fanon once pointed out.  “It is violence in its natural state.”  It is not possible for a settler-colonial regime to racially enable one people at the expense of another people without the use of violence.  As Arnon Sofer himself admits, the maintenance of a “Zionist-Jewish state with an overwhelming majority of Jews” requires permanent institutionalized violence.  That was already true in 1948 and it remains true today and it will remain true until this project of racial exclusivism and privilege is abandoned once and for all for the hideous anachronism that it is.

Saree Makdisi’s latest book is Palestine Inside Out.