You Are Here: Home → JTA reports where & how Dems, Repubs are wooing Jewish voters (for Israel)

JTA reports where & how Dems, Repubs are wooing Jewish voters (for Israel) 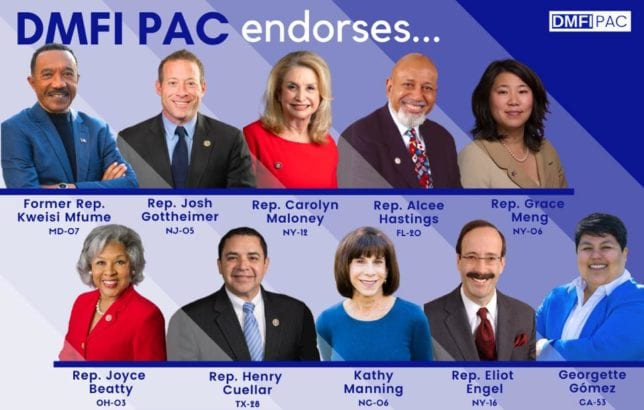 Democratic and Republican Jewish groups are both working to get out their vote, and to promote candidates who support Israel…

(We’re guessing they won’t be mentioning Israel’s long record of human rights abuses, systemic racism, and damage to the US…)

The Jewish Telegraphic Agency (JTA) has just published a detailed report on how both parties are working to get out the Jewish vote, particularly in swing states.

Journalist Ron Kampeas writes: “One thing we know about elections is that Jewish voters can make a difference.

In years past I have sat among crowds rallied by Jewish campaign surrogates in packed synagogues in Ohio and bingo halls in Florida, and I’ve followed canvassers searching for mezuzahs in neighborhoods known for having large Jewish populations.

Kampeas reports that so far this year the Republican Jewish Coalition has “the most advanced operation in place.” It already has “$10 million pledged to reelect Donald Trump and secure GOP control in Congress..”

The RJC’s get-out-the-vote operation already has four workers on staff in Florida, according to Matt Brooks, its executive director, and volunteers have made 300,000 phone calls to Jewish voters in swing states — a preliminary round of phone banking where the goal is not persuasion but identification, to see how committed a voter is to reelecting Trump and what issues they are considering ahead of Election Day.

This lays the ground for more calls and texts later in the season that are tailored to the individual voter.

But with Trump’s polling in freefall, the group doesn’t have that many states to direct that energy. Brooks told me his swing-state operation was focusing on Florida, Ohio, Arizona, Pennsylvania and Georgia.

“We’re monitoring and looking at and ready to pivot to see how Michigan and Wisconsin continue to shape up,” he added.

Including Georgia and Ohio in the mix indicates the deep trouble Trump is in. In 2016, he won Georgia by 5 points and Ohio by 8.

From Brooks’ map it would appear that the RJC doesn’t think there’s a chance for Trump to win in Michigan or Wisconsin. Polls show Joe Biden leading Trump in both states by double digits.

Among other things, the RJC is airing a video calling Trump “the most pro-Israel president in history.”

Kampeas reports that “the  Jewish Democratic Council of America has a much more expansive map. In addition to the five states the RJC is targeting, along with Michigan and Wisconsin, the JDCA says it is ready to target Jewish voters in Colorado, Maine, Minnesota, Nevada, New Hampshire, North Carolina and Virginia — a 14-state plan, as director Halie Soifer put it.

Soifer said she hoped to spend over $1 million and as much as $5 million in pushing out the vote.

“They are the states where we think the Jewish vote can make a difference in the presidential and key Senate and House elections,” she said.

JDCA has organized a number of webinars, and has launched phone banking. Soifer told me she hopes to reach “hundreds of thousands, if not over a million” Jewish voters. “First it will be persuasion methods, and then get out the vote,” she said.

The political action committee associated with the Democratic Majority for Israel is planning to highlight Biden’s pro-Israel record in a digital campaign.

But the PAC’s emphasis will be down-ballot, Mellman said, because that’s where it makes more sense to spend money; both presidential campaigns have plenty of resources already. The messaging down-ballot will not necessarily be about Israel, he said, but about issues of importance to local voters.

DMFI head Mark Mellman is a prodigious fundraiser and says his group would be spending “in the millions of dollars in a broad campaign.”

The DMFI PAC has already run ads blasting candidates running against its chosen candidates. While the PAC’s support is based on helping Israel, the ads focus on other themes.

Are you a #proIsrael Democrat? Join Democratic Majority for Israel — we are progressive Democrats committed to a strong U.S.-Israel relationship. https://t.co/X42kdJpB7T pic.twitter.com/tgnjY68Uke

The Jewish Democratic Council of America added 17 names to its congressional endorsements, bringing the total to 89.

“Most of the new batch is challenging Republicans in states that Trump won in 2016, including Ohio, Georgia, Missouri, Pennsylvania, Wisconsin, Alaska, South Carolina and Tennessee.”

In some Senate races the partisan PACs may compete against one another, based on their endorsements (which suggests that Israel will win either way):

Maine: The Republican Jewish Coalition has endorsed Sen. Susan Collins; the Democratic Majority for Israel, J Street and the Jewish Democratic Council of America are backing her challenger, Sara Gideon.

According to Kampeas, “Five state-level Jewish Democratic organizations are working together to influence down-ballot elections in their states.”

The groups will particularly use text messages and targeted social media ads:

“In 2008, we would go door to door and look for the mezuzah,” said Soifer, who ran Jewish outreach for Obama’s Florida campaign that year.

“Now we can purchase lists of Jewish voters and with a click of a button target hundreds of thousands with digital advertising.”

Both parties will be running ads.

Kampeas reports that “Brooks’ RJC has rolled out the highest-profile digital campaign so far, and he said he has money to spend on broadcast and cable ads.”

The Democrats are not far behind…

The Jewish Democratic Council of America has just launched two ads on social media platforms. And Mellman said he had available technology that would allow the Democratic Majority for Israel’s PAC to target individual voters depending on their known preferences.

“We have a pretty sophisticated way to figure out who the targets are that are going to be most movable, persuadable, in the House and Senate races,” he said.

Meet the candidates challenging pro-Israel Democrats in US Congress

The arms race between Dems and GOP for pro-Israel donors