You Are Here: Home → Israel’s Fingerprints Are All Over the Assassination of Qasem Soleimani

Israel’s Fingerprints Are All Over the Assassination of Qasem Soleimani 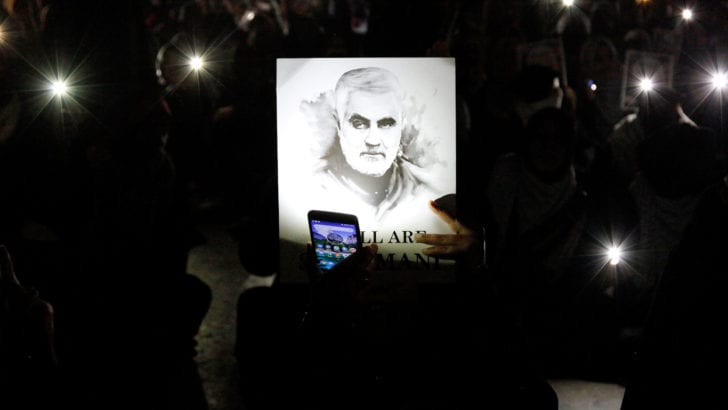 Was Israel involved in the assassination of Iranian Gen. Qasem Soleimani? A protester illuminates a portrait of the general, with light from a mobile phone, during a rally to condemn his killing in Iraq by a U.S. airstrike. Ikram Suri | AP

The fingerprints of Israeli intelligence, the Mossad, are unmistakably present in the assassination of Qasem Soleimani.

by Ramzy Baroud and Romana Rubeo, reposted from Mintpress

By killing top Iranian military commander, Qasem Soleimani, American and Israeli leaders demonstrated the idiom ‘out of the frying pan into the fire.’

US President Donald Trump and Israeli Prime Minister Benjamin Netanyahu are both politically and legally embattled – the former has just been impeached and the latter is dogged by an Attorney General indictment and investigation into major corruption cases.

Despairing, out of options and united by a common cause, both leaders were on the lookout for a major disruption – that would situate them in a positive light within their countries’ respective media – and they found it.

The assassination of the Iranian major general in the Islamic Revolutionary Guard Corps and commander of its Quds Force, Soleimani, on January 3, along with several Iranian military leaders by a US drone was a testament to the degree of that US and Israeli desperation.

Although there has been no official confirmation or denial of the Israeli role in the US operation, it is only logical to assume indirect or even direct Israeli involvement in the assassination.

Over the last few months, the possibility of a war against Iran has once more gained momentum, topping the agenda of Israel’s foreign policy makers. Politically beleaguered Netanyahu has repeatedly and tirelessly asked his friends in Washington to increase pressure on Teheran.

“Iran is increasing its aggression as we speak,” Netanyahu claimed on December 4, during a meeting with US Secretary of State, Mike Pompeo. “We are actively engaging in countering that aggression.”

One can only assume what “active engagement” from the overtly militant Israeli point of view can possibly mean in this context.

Moreover, the fingerprints of the Israeli intelligence, the Mossad, are unmistakably present in the assassination. It is plausible that the attack at Soleimani’s convoy near the Baghdad International airport was a joint CIA-Mossad operation.

It is well-known that Israel has more experience in targeted assassinations in the region than all Middle Eastern countries combined. It has killed hundreds of Palestinian and Arab activists this way. The assassination of Hezbollah’s top military leader – the movement’s second in command –  Imad Mughniyah in February 2008, in Syria, was only one of numerous such killings.

It is no secret that Israel is itching for a war against Iran. Yet all of Tel Aviv’s efforts have failed to bring about US-led war similar to the Iraq invasion in 2003. The most that Netanyahu could achieve in terms of US support in that regard was a decision by the Trump administration to renege on the US commitment to the international community by withdrawing from the Iran Nuclear Treaty in May 2018.

That coveted Israeli war seemed assured when Iran, after various provocations and the slapping by Washington of yet more sanctions, shot down a US unmanned aerial vehicle that, as Iran maintained, violated the country’s airspace, on June 20, 2019.

Even then, the US response fell short of achieving the all-out war that Netanyahu has been so frantically seeking.

But much has happened since then, including a repeat of  Netanyahu’s failure to win a decisive election, thus securing another term in office, compounding the Israeli Prime Minister’s fully justified fear that he could eventually find himself behind bars for operating a massive racket of bribes and misuse of power.

Trump, too, has his own political woes, thus his own reasons to act erratically and irresponsibly. His official impeachment by the US House of Representatives on December 18 was the last of such bad news. He too needed to up the political ante.

If there is one thing that many Democratic and Republican lawmakers have in common is their desire for more Middle East military interventions and to maintain a stronger military presence in the oil and gas-rich region. This was reflected in the near-celebratory tone that  US officials, generals, and media commentators have used following the assassination of the Iranian commander in Baghdad.

Israeli officials too were visibly excited. Immediately following the killing of General Soleimani, Israeli leaders and officials issued statements and tweets in support of the US action.

For his part, Netanyahu declared that “Israel has the right to defend itself. The US has the same right exactly.” “Soleimani,” he added, “is responsible for the deaths of innocent US citizens and many others. He was planning further attacks.”

The last statement in particular, “he was planning further attacks,” points to the obvious joint intelligence and information sharing between Washington and Tel Aviv.

Benny Gantz, mistakenly celebrated for being a “centrist”, was no less militant in his views. When it comes to matters of national security, “there is no coalition and opposition,” he stated.

“The killing of Soleimani is a message to all the head of global terror: on your own heads be it,” the Israeli general, responsible for the death of thousands of innocent Palestinians in Gaza and elsewhere, also added.

Iran will certainly respond, not only against American targets but Israeli targets as well, for Teheran is convinced that Israel has played a major role in the operation. The pressing questions are more about the nature and the timing of the Iranian response: How far will Iran go to send even a stronger message back to Washington and Tel Aviv? and could Teheran communicate a decisive message without granting Netanyahu his wish of an all-out war between Iran and the United States?

Recent events in Iraq – the mass protests and attempt by unarmed protesters to storm the US embassy in Baghdad on December 31 – were, to some extent, a game changer. Initially, they were understood as an angry response to US airstrikes on an Iranian-backed militia group on Sunday, but the protests had unintended consequences as well, particularly dangerous from a US military and strategic perspective. For the first time since the phony US ‘withdrawal’ from Iraq under the previous administration of Barack Obama in 2012, a new collective understanding began maturing among ordinary Iraqis and their representatives that the US must leave the country for good.

Acting quickly, the US, with palpable Israeli giddiness, assassinated Soleimani to send a clear message to Iraq and Iran that demanding or expecting an American withdrawal is a red line that cannot be crossed – and to the whole Middle East that the evident US retreat from the region will not be duplicated in Iraq.

The great game is afoot

Soleimani’s assassination was followed by yet more US airstrikes on Iran’s allies in Iraq, as to also emphasize the level of US seriousness and willingness to seek violent confrontation as a matter of course.

While Iran is now weighing in its responses, it must also be aware of the geostrategic consequences of its decisions. An Iranian move against US-Israeli interests would have to be convincing from the point of view of Iran and its allies, yet, again, without engaging in an all-out war.

Either way, Iran’s next move will define the Iranian-US-Israeli relations in the region for years to come and will further intensify the ongoing regional and international “Great Game” on full display throughout the Middle East.

Soleimani’s assassination could also be understood as a clear message to both Russia and China as well, that the US is prepared to set the whole region on fire, if necessary, in order to maintain its strategic presence and to serve its economic interests – which mostly lie in Iraqi and Arab oil and gas.

This comes at the heel of a joint Russian, Chinese and Iranian naval drill in the Indian Ocean and the Gulf of Oman, starting on December 27. The news of the military exercises must have been particularly alarming to the Pentagon, as Iran, which was meant to be isolated and browbeaten, is increasingly becoming a regional access point to the emergent and resurfacing Chinese and Russian military powers respectively.

Soleimani was an Iranian commander, but his massive network and military alliances in the region and beyond made his assassination a powerful message sent by Washington and Tel Aviv that they are ready and unafraid to up their game.

The ball is now in the court of Iran and its allies.

Judging by past experiences, it is likely that Washington will regret assassinating the Iranian general for many years to come.

Ramzy Baroud is a journalist and the Editor of The Palestine Chronicle. He is the author of five books. His latest is “These Chains Will Be Broken: Palestinian Stories of Struggle and Defiance in Israeli Prisons” (Clarity Press, Atlanta). Dr. Baroud is a Non-resident Senior Research Fellow at the Center for Islam and Global Affairs (CIGA), Istanbul Zaim University (IZU). His website is www.ramzybaroud.net

Romana Rubeo is an Italian writer, translator and an editor at The Palestine Chronicle. Rubeo holds a Master’s Degree in Foreign Languages and Literature and specializes in Audio-Visual and Journalism Translation.

Did Israel play a role in the Soleimani assassination? – analysis by Jerusalem Post