You Are Here: Home → From Resistance to Assistance: Little Pushback to Trump’s Iran Assassination 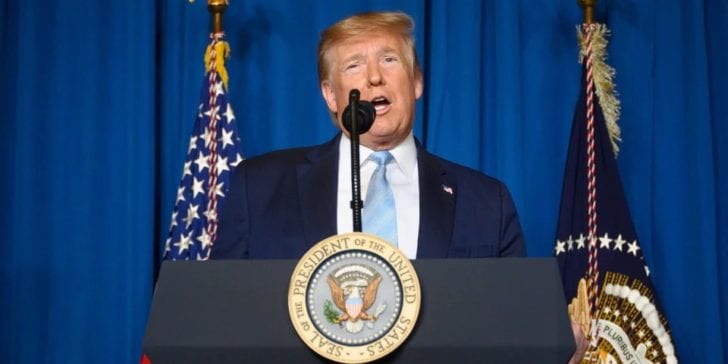 by Alan Macleod Reposted from FAIR

After Donald Trump’s election, both the New York Times and Washington Post saw huge jumps in subscribers, all hoping that the outlets would hold the president to account. Both papers tapped into this sentiment: In February 2017, the Post adopted the motto “Democracy Dies in Darkness” on its masthead; Times ads have used the slogan, “The truth is more important now than ever.”

Trump has played his part, attacking media that bother him as “failing,” and reportedly telling all federal agencies in October to cancel their Times and Post subscriptions.

Yet when the president does indeed carry out dangerous, aggressive actions, such as the assassination of Iranian general and political leader Qassem Soleimani in Baghdad on January 3, “resistance” turns to assistance from the corporate press. FAIR studied every editorial and opinion piece on Soleimani’s killing published by the two newspapers, from the attack until January 7 (around three dozen articles), and found their pushback to Trump’s actions to be distinctly limited.

Opinion writers and editorial boards took great pains to emphasize the disgust and contempt they held for Soleimani, a “terrorist mastermind” (Washington Post, 1/6/20) “as evil as Osama bin Laden and Abu Bakr al-Bahdadi” (Washington Post, 1/3/20). As Gail Collins wrote in the New York Times (1/7/20), “There seems to be a wide range of opinions about Soleimani, none of which are that he was a great guy the world will miss.” The millions of people who attended his funeral may beg to differ; two-thirds of Iranians rated him “very favorably,” according to a 2018 University of Maryland poll.

Some people in Lebanon and Yemen who received his support against foreign aggression, and citizens of Iraq and Syria who no longer live under the ISIS caliphate he helped defeat, may also have a perspective on Soleimani that went largely unrepresented in leading US papers. As Noam Chomsky (Truthout, 1/7/20) remarked of Iraqi Kurds:

They have not forgotten that when the huge, heavily armed US-trained Iraqi army quickly collapsed, and the Kurdish capital of Erbil, then Baghdad and all of Iraq were about to fall in the hands of ISIS, it was Soleimani and the Iraqi Shia militias he organized that saved the country.

The chief reason for Soleimani’s nefariousness, the Times editorial board (1/3/20) explained, was that he was “indisputably an enemy of the American people…and an architect of international terrorism responsible for the deaths of hundreds of Americans.” The claim that Soleimani had killed hundreds of Americans was repeated, word for word, in many articles in the papers of record (e.g., New York Times, 1/7/20; Washington Post, 1/3/20, 1/3/20) as well as across the media (e.g., Boston Globe, 1/3/20; Fox News, 1/6/20; The Hill, 1/7/20).

These “hundreds of Americans” were US forces killed by improvised explosive devices (IEDs) during the Iraq War, supposedly made in Iran and planted by Iranian-backed Shia militias. As professor Stephen Zunes pointed out in the Progressive (1/7/20), the Pentagon provided no evidence that Iran made the IEDs, other than the far-fetched claim that they were too sophisticated to be made in Iraq—even though the US invasion had been justified by claims that Iraq had an incredibly threatening WMD program.

The made-in-Iran claim, in turn, was the main basis for pinning responsibility for IED attacks on Shia militias—which were, in any case, sanctioned by the Iraqi government, making Baghdad more answerable for their actions than anyone in Tehran. Last year, Gareth Porter reported in Truthout, (7/9/19) that the claim that Iran was behind the deaths of US troops was part of Vice President Dick Cheney’s plan to build a case for yet another war.

Even if one is inclined, against all experience, to take US claims about an official enemy on faith, the language that Soleimani killed “hundreds of Americans” is a deliberately nebulous. American what—children? Civilians? Indeed not. The allegation is that he targeted US troops or “contractors”—i.e., mercenaries—stationed not at home, but in a region on the other side of the world that the US illegally attacked and has occupied for most of this century. “Soleimani provided effective military resistance to foreign occupying forces,” though, sounds very different from “killed hundreds of Americans.”

Iraq were about to fall in the hands of ISIS, it was Soleimani and the Iraqi Shia militias he organized that saved the country.

In the papers studied, the majority of articles carried a similar, cookie-cutter structure: agree that Soleimani was a bad guy and deserved to be killed, but worry about the consequences and criticize the president on technical grounds. The Times’ editorial board (1/3/20) wrote that “the real question” wasn’t whether Soleimani’s killing “was justified, but whether it was wise.” Meanwhile, the Post (1/3/20) made exactly the same point: “Yes, Soleimani Was an Enemy,” the editorial board declared. “That Doesn’t Mean Trump Made the Right Call.”

Criticism of the government’s actions was largely limited to worrying it might escalate tensions and spark a hot war—something for which US corporate media have been laying the groundwork for months (FAIR.org, 7/2/19) if not years (Extra!, 3/12). Complaints included that the US lacked a clear grand strategy (New York Times, 1/7/20), that it was a “rash and shortsighted” (Washington Post, 1/6/20), that there were “no more adults in the room” (New York Times, 1/6/20), that it would “bolster” the Iranian regime (New York Times, 1/6/20) or could “trigger a bigger conflict” (Washington Post, 1/3/20) that risks “ensnaring” the US in a wider encounter (Washington Post, 1/6/20). (In corporate media mythology, the United States is always an innocent party getting accidentally trapped into going to war, rather than actively pursuing it—FAIR.org, 6/22/17.)

The Times and Post offered some meager objections based on congressional technicalities. “Why didn’t the White House alert senior Democrats in Congress, including Speaker Nancy Pelosi?” asked the Times (1/3/20). The Post (1/6/20, 1/6/20) made similar criticisms, as if had Trump done so, there would be no legal issues with killing a foreign leader in another country.

There were some exceptions. Law scholar Karen Greenberg (New York Times, 1/6/20) wrote that the general’s killing was illegal and an “inevitable outcome of our dangerous ‘war on terror’ policy.” Iranian-American writer Azadeh Moaveni worried about the effect of war on Iran and noted that Soleimani was considered a “war hero” inside the Islamic Republic (New York Times, 1/6/20).

Opposition to war from the Times’ regular columnists was more about who was carrying it out. Michelle Goldberg (1/6/20), condemning Trump’s “unstable” actions, presented Gen. James “Mad Dog” Mattis as a moderating force, although she did note that, “To Iranians, after all, America is the aggressor.” Paul Krugman (1/6/20), meanwhile, acknowledged that Iranians would not accept Trump’s right to kill their leaders, but also claimed that before Trump, the US was “relatively trustworthy” and “clearly stood for global rule of law,” always behaving as “no more than first among equals.”

But across the spectrum of dozens of articles in America’s two most influential newspapers, there was little difference in outlook. Contempt for the commander in chief? Sure. But scrutiny of the state? Not so much. As Stephens reminded Times readers, “What shouldn’t be in doubt is the justice.”

With all the confidence of White Star Line Executives in 1912 proclaiming HMS Titanic unsinkable, opinion columnists in our most influential media made a number of utterly terrible predictions or assertions that were immediately disproven.

The Times editorial board, echoing official claims, wrote that Soleimani likely “had come to Iraq in part to plot the next move against United States military personnel or civilians.” In reality, he had been invited to attend regional peace talks with Saudi Arabia by the Iraqi prime minister, who had personally asked Trump for permission for Soleimani to attend. Trump agreed, then used the opportunity to assassinate him.

Less than two days later, the Iraqi parliament voted overwhelmingly to expel all US forces from Iraq, which made Times top columnist Thomas Friedman’s assertion that protests against the US embassy in Baghdad were staged to “make it look as if Iraqis wanted America out when in fact it was the other way around” seem distinctly foolish.

Meanwhile, both the Post (1/3/20) and the Times (1/3/20) published articles confidently predicting that “the killing will have the effect of deterring further Iranian attacks on Americans, such as the rocket strike that killed a US contractor at an Iraqi base last week,” and that Iran “will prefer to tread lightly,” with the assassination “bring[ing] a sense of realism to the Islamic Republic’s thinking.” Needless to say, the dozens of Iranian rockets raining down on US bases in Iraq have proven these predictions woefully incorrect.

While corporate media like to present themselves as holding the current administration to account, in reality they offer little meaningful resistance to its foreign policy adventures. As with Trump’s efforts to overthrow the governments of Venezuela and Bolivia (see FAIR.org, 1/25/19, 11/15/19, 11/26/19), media are essentially lining up shoulder to shoulder with the president. When it comes to opposing or even questioning an aggressive foreign policy, the resistance™ is useless.

Alan MacLeod @AlanRMacLeod is a member of the Glasgow University Media Group. His latest book, Propaganda in the Information Age: Still Manufacturing Consent, was published by Routledge in May 2019.

Former Top Bush Official: I Saw the March to War in 2003. I’m Seeing the Same Thing with Iran Now (video)
How Pro Israel Neocons Pushed for War in Iraq (video)
Israel has been targeting Iran for decades
Timeline of US-Iran Conflict
The Soleimani Assassination: The US is now at war with Iran