You Are Here: Home → Israeli troops shoot at, beat 2 Palestinian boys, detain them for 29 hours 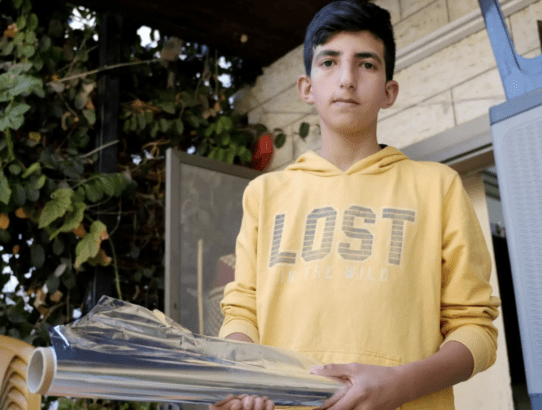 15-yr-old Mohammed & 13-yr-old Mustafa were arrested for playing games boys play; their parents weren’t informed. The next 29 hours were traumatizing.

by Gideon Levy and Alex Levac, reposted from Ha’aretz, October 15, 2021

Only twice during that bitter and seemingly endless day did he burst into tears. Once when he saw his 13-year-old cousin Mustafa lying on the ground, his face bleeding from the soldiers’ blows, and a second time when the soldiers blindfolded them and ordered them both to go down on their knees. He was petrified that they were about to be executed. The rest of the time he remained silent, keeping his anxiety and distress to himself.

For a total of 29 hours, the two Palestinian cousins, both minors, were in the hands of Israel Defense Forces troops and then in police custody; they were bound and beaten, and deprived of food and access to a proper toilet. The soldiers did not inform the boys’ worried families about their whereabouts. Their transgression: They played a children’s game. It wasn’t until the following night that a military court released them, almost unconditionally.

Hassan Mussa, principal of the attractive boys’ school in the town of Ni’lin, near Ramallah, lets an 11th-grader named Mohammed Amira leave in the middle of the day, so he can accompany us to the place where he and his cousin had been arrested by soldiers and tell us what happened to them. “Tell them all about the occupation,” the principal urges him. Mohammed’s younger cousin, Mustafa Amira, 13, had broken his arm while riding his bike earlier on the day we visited this week, and was taken to hospital, so he could not join us to reconstruct the events and talk about them.

The youths were alone in their family’s olive grove on village property that’s about a kilometer from the separation barrier; on the other side of it are two settlements, Hashmonaim and the sprawling Haredi city of Kiryat Sefer (Modi’in Ilit). It was Monday, September 13. The two had returned home from school at 1 P.M., ate and rested, and at 4:30, Mustafa walked the few hundred meters from his house to Mohammed’s and suggested going to the olive grove. They had a new game they wanted to try: inserting aluminum foil and cleaning fluid into a plastic bottle and shaking it to make it blow up. It was supposed to work; they’d seen it demonstrated on YouTube. Mustafa brought the foil from his kitchen, Mohammed provided the cleaning fluid, and together they walked to the grove, at the outskirts of the village.

Fifteen-year-old Mohammed Amira is well dressed. He speaks quietly, in a childlike voice, relating what happened that day in great detail, not omitting descriptions of the prickly pear thorns that scratched him while he was being dragged by the soldiers, or of each and every one of the blows that were rained on him.

Mohammed’s father works in the falafel-hummus-ful restaurant in the village, and has five sisters and a brother. Their house is well kept, and the neatly tended yard has a large array of potted plants.

The two teenagers reached the olive grove around 5 o’clock. First they played “Arabs and Jews,” which is like our “cops and robbers,” a variation on a game of tag. Mohammed was the Jew, Mustafa was the Arab – and the Jew caught the Arab. Then they ate some snacks and turned to their YouTube-inspired game, tukia in Arabic.

They found four small, plastic mineral-water bottles on the ground, filled them with cleaning fluid, inserted the aluminum foil, shook them and threw them a few meters away, to avoid being hurt. The bottles exploded. A bit of noise and some smoke – just like on YouTube. It was the first time they had tried it.

Iyad Hadad, a district field researcher for the Israeli human rights organization B’Tselem, who accompanied us on our visit, recalled that when he was boy, in the Qaddura refugee camp in Ramallah, the children played similar games with explosive materials.

Even before the cousins started the game they noticed two groups of soldiers. One group, of three or four soldiers, was sitting under a large parasol next to the separation barrier, some distance away; the other, larger, group was on a nearby hill.

After Mohammed and Mustafa blew up the bottles the soldiers fired two rubber-tipped metal bullets at them, and started to shout and curse at them. The two youths shouted back at them. They were so focused on the soldiers near the barrier that they didn’t notice that the other group, of seven or eight troops, had come down and flanked them from the rear. The IDF is a sophisticated, tactical army: Its crafty soldiers succeeded in executing a strategic surprise move against the two youths, or should we say children. Still, they only caught Mustafa initially; Mohammed managed to run away.

But a few minutes later, Mohammed heard Mustafa shouting in pain. His conscience bothered him – he was the older of the two – and he decided to rejoin his younger cousin. He saw the soldiers punching Mustafa in the face as he lay on the ground, crying out; the boy’s face was swollen and covered in blood, Mohammed says – a fact borne out by a photograph taken two days later.

Mohammed approached the soldiers, hands raised. One of them grabbed him by the ears and head-butted him several times with his steel helmet. His head reeling from the pounding, the teenager was ordered to lie down on the ground.

Search for an imaginary accomplice

Shortly afterward, a soldier handed Mohammed Amira a phone and ordered him so to speak with someone named “Hamzeh,” who was on the line. Hamzeh questioned him about what they were doing in the olive grove and took special interest in the whereabouts of “Yousef,” a third youth who was purportedly with them. In the hours that followed, Mohammed would be asked over and over about the arch-terrorist “Yousef,” a person he says never existed. A few hours later, he discovered that Mustafa, under the pressure of the beatings, had been forced to say that there had been a third youth and had even invented a name for him. Thus, the IDF, the Israel Police and probably the Shin Bet security service, too, set off in hot pursuit of a top wanted individual: the nonexistent Yousef.

Mohammed told his telephone interrogator, and afterward his police interrogators, on Monday evening, about the aluminum foil and the cleaning fluid. They kept wanting to know about Yousef. The soldiers told Mohammed to take them to the scene of the crime, but when they got there, about 9 P.M., he couldn’t find the remains of the bottles among the olive trees. The two youths had been driven to a point near the Hashmonaim checkpoint nearby in separate jeeps – to prevent them from coordinating their testimony, of course. Mustafa’s hands were bound behind his back, Mohammed’s hands were free. 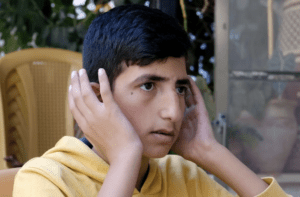 Before setting out, Mohammed Amira had been forced to speak on the phone also with “Captain Wissam,” who introduced himself as the commander of the Ni’lin region, presumably on behalf of the Shin Bet; he too questioned Mohammed about Yousef. The two youths were then taken for interrogation to the police post at the checkpoint. They hadn’t been given anything to eat at that point, and each time they had asked to relieve themselves they were taken to an open field.

Two police interrogators, a woman and a man, were about to question Mohammed, but to everyone’s surprise the 15-year-old insisted on his right to have a lawyer present. He’d read about that in a book. At his request, the officers called his brother, Safi, 25, to ask him to find a lawyer, but they would not allow Mohammed to speak with him. Thus, the worried family finally learned what had befallen their son and his cousin. In the hours that had passed since the two disappeared, the family had contacted the Palestinian Authority and the local council, and had also started searching the area. At the Hashmonaim checkpoint they were told that no youths of those names were in detention.

Mohammed’s 15-minute police interrogation, which he says focused on Yousef, began before the lawyer arrived. Mustafa was questioned for half an hour. Fingerprints and DNA samples were taken from the two suspects. Shackled together at their feet, they were then driven in a jeep to a military base – Mohammed doesn’t know which one. They were given mattresses and a thin blanket and ordered to sleep. It was very cold in the room, Mohammed recalls, and he couldn’t fall asleep. The mattress was cold and wet.

On Tuesday morning the cousins were finally given food for the first time, a few crackers, and then were taken to a local hospital – Mohammed didn’t know which one – for a medical examination. At some point they were hooked up by video to a military juvenile court. The judge, Maj. Merav Hershkowitz Yitzhaki, who spoke to representatives of both sides in camera, announced that they had agreed on the release of the two suspects provided a family member would guarantee that they would not commit a similar offense – what’s referred to as involvement in a hostile terror act – during a period of one year, or would undertake to pay a fine of 3,000 shekels ($930) if they did. Safi, who was in the courtroom but in the court transcript was erroneously described as the brother of both boys, signed the guarantee, and the judge ordered the boys’ release.

The IDF Spokesperson’s Unit stated, in response to a query from Haaretz: “During the incident in question, two Palestinian suspects were seen setting off an explosion by means of an improvised device alongside the security barrier in the vicinity of Ni’lin, close to the community of Hashmonaim, which is under the control of the Ephraim territorial brigade. Afterwards, the suspects fled and during an attempt by army troops to apprehend them, one of them fell to the ground and was slightly bruised on his face; he received medical treatment immediately from the troops. The two were later transferred for further handling to the Israel Police. Claims of being denied food were examined and it was found that they are groundless; the suspects were given food and drinks.”

Toward evening on Tuesday, the two youths were taken to Ofer Prison, near Ramallah; they fell asleep in a military jeep, which stood in front of the facility for hours. Safi waited for them next to the prison, as the lawyer had told him they would be set free there. But the IDF decided earlier to drop them off at the entrance to Nil’in – where no one was waiting for them. By now it was 9:30 P.M. on Tuesday, some 29 hours after the start of their ordeal. Passersby took them to their homes, where their arrival was celebrated “like at a wedding.”

Mohammed Amira still doesn’t sleep well and suffers from nightmares. He kept the piece of army-issue flannelette with which he was blindfolded as a souvenir. Here it is, he says, running to fetch it from his room.