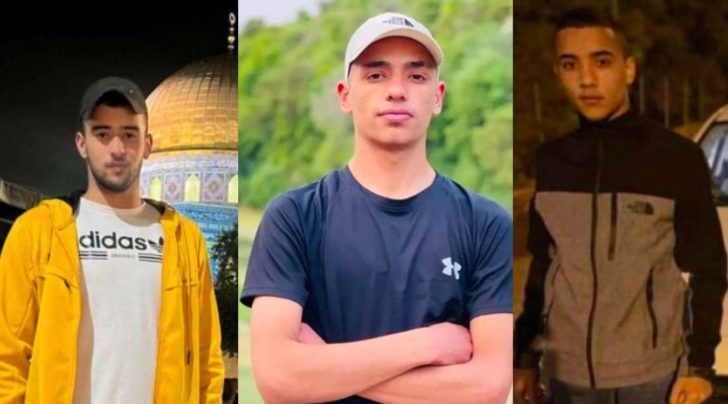 Twenty-two Palestinians have been killed since the beginning of September (six of them under 20 years old); one Israeli soldier has also been killed. As is often the case with Palestinians shot by Israel, two of these latest victims were denied medical assistance, and their bodies are being withheld.

Update  In an official statement, the Commission Of Detainees’ Affairs has confirmed that Bassel Basbous was shot and injured on Monday, October 3, but did not die from his wounds (as previously reported – see below) and is at the Shaare Zedek Medical Center, but Israel never informed the Palestinians about the issue. It also confirmed the death of two Palestinians.

The Commission confirmed that the two Palestinians who were killed by the Israeli army are Khaled Anbar Dabbas, 19, from the Al-Jalazoun refugee camp, and Salama Ra’fat Sharay’a, from Birzeit, near Ramallah.

The headline and featured image of this post have been updated on Oct. 5 to reflect this new information.

In its statement, the Commission said:

“Bassel is at Shaare Zedek Israeli Medical Center; he was shot in the left arm and the left leg and was also admitted to surgery.

The Israeli military court in Ofer prison will hold a hearing this coming Thursday to remand him for further interrogation.”

The Commission’s lawyer, Karim Ajwa, also said the two Palestinians who were killed by the soldiers are Khaled Anbar Dabbas and Salama Ra’fat Sharay’a.

“We were informed that Bassel was killed before the soldiers took his body away, and because the soldiers shot him and took him away, nobody was able to see him, and we weren’t given any further information….

However, a Doctor at the Israeli hospital, we don’t want to say who he is because we don’t want him to lose his job, managed to talk to him. The doctor thought my son was Sharay’a who was thought to be injured, but my son told him I am Bassel; please tell my parents that I am alive….”

Later, the district coordination office got in touch with us and told us that Bassel is alive. However, we are not allowed to see him, and we have no permits… the District Coordination Office is working on getting us the needed permits to visit with our son.

There was also a young Palestinian woman who saw my son at the hospital, and she got in touch with us. We sent her a photocopy of my son’s ID card, and she confirmed it is him, and he is alive…

“While am pleased my son is alive, we are all sad that Khaled and Salama are dead… it is all God’s will…”

On Saturday evening, Israeli soldiers killed a Palestinian in the Al-Ezariyya town, southeast of occupied Jerusalem, in the West Bank.

The Palestinian Health Ministry said the Palestinian has been identified as Fayez Khaled Damdoum, 18, and confirmed that the Israeli soldiers shot him with a live round in the neck. [Some reports give his age as 17.]

Eyewitnesses said the Israeli soldiers fired live rounds at the slain Palestinian while driving his motorcycle near a local mosque in the town.

Israeli Ynet News claimed that the slain Palestinian “was driving a scooter during an exchange of fire” when the soldiers shot him and alleged that Palestinian protesters also hurled an explosive charge.

Palestinian sources said there were protests in the area, and the soldiers were firing live rounds randomly, killing the young man and seriously wounding another.

The slain Palestinian was not participating in the protests and was passing through the area.

On Monday dawn, Israeli soldiers killed two Palestinians and moderately wounded one near the Al-Jalazoun refugee camp, north of Ramallah, in the central part of the occupied West Bank.

They added that the Palestinians were in a car, approximately at 3:30 at dawn, heading to work when the soldiers fired many live rounds at their car, killing two and moderately wounding a third before taking them and the car to an unknown destination.

The slain Palestinians have been identified as Bassel Qassem Basbous, 19, and Khaled Fadi Anbar, 21, from the Al-Jalazoun refugee camp.

The wounded Palestinian, whom the soldiers also abducted, has been identified as Ra’fat Salama Habash, 19, from the nearby town of Birzeit.

Eyewitnesses said the two slain Palestinians were still bleeding when the soldiers detained them and refused to allow Palestinian medics to reach them.

The Israeli army claimed it invaded the area “to arrest wanted Palestinians when a car came at them at high speed before the soldiers opened fire at it, killing two and wounding one.”

The army alleged that Palestinians tried to carry out a ramming attack against the soldiers; however, eyewitnesses denied the allegations and said the Palestinians driving the car were surprised by the soldiers invading the area before the army fired several live rounds at them.

The army took the corpses of the two slain Palestinians, and the wounded, to an unknown destination.

It is worth mentioning that the army abducted, at dawn Monday, at least sixteen Palestinians during invasions and searches of dozens of homes and buildings across the occupied West Bank.