You Are Here: Home → Israeli Soldiers Kill Another Palestinian Near Hebron 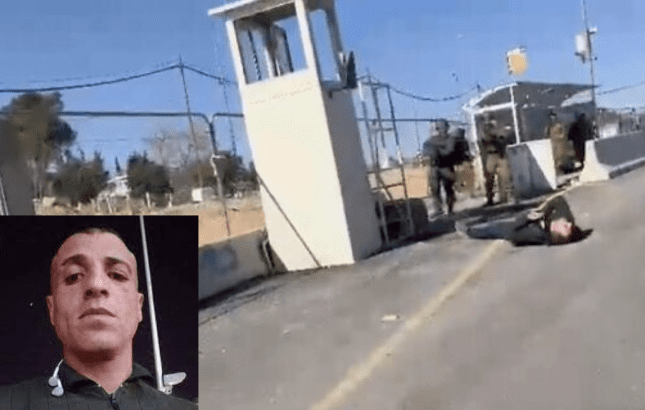 Faleh Mousa Jaradat, age 39, was shot by an armed Israeli soldier and left to die at the side of the road.

After an alleged stabbing attack with no injuries, fully armed Israeli soldiers shot Palestinian Faleh Mousa Jaradat and left him to die. He leaves behind a wife a five children, one of them a newborn.

Israeli soldiers killed, Monday, a young Palestinian man at the Etzion Junction, south of Bethlehem in the occupied West Bank, after an alleged stabbing attempt.

[NOTE: Israeli soldiers have been known to plant weapons on Palestinians after “alleged attacks.” Example here; opEd by an Israeli journalist here.)

Palestinian medical sources said the young man has been identified as Faleh Mousa Jaradat, 39, from Sa’ir town, northeast of Hebron.

The Palestinian remained bleeding on the ground without medical attention until he succumbed to his wounds, eyewitnesses said.

Palestinian medics rushed to the area, but the soldiers did not allow them to even approach Jardatat.

The slain man was a married father of five children, the youngest is a newborn.

After his death, the soldiers summoned his brother, Mohammad, for interrogation at the Etzion military base and security center.