You Are Here: Home → Israeli Massacres: A Brief and Shocking History 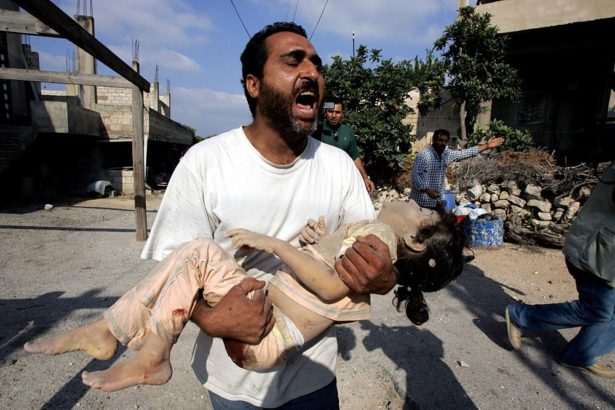 Child killed in the Qana massacre, in an air strike carried out by the Israeli Air Force (IAF) on a three-story building, during the 2006 Lebanon War. 28 civilians were killed, of which 16 were children.

Israeli massacres, many including child victims, span 70 years – thousands of Palestinian lives snuffed out in the pursuit of a Jewish State.

It would be nice to think that, as an Israeli officer once put it, “This time we went too far” — that the killings of 17 unarmed protesters in Gaza by Israeli riflers across a security fence on Friday would cause the world to sanction Israel for its conduct. But if you look over Israel’s history, you find that the massacre has been a ready tool in the Israeli war-chest; and Israelis have not been prosecuted for carrying them out. Indeed, a couple of those responsible later became prime minister!

Here, largely from my own memory, is a rapidly-assembled list of massacres, defined by Webster’s as the killing of a “number of usually helpless or unresisting human beings under circumstances of atrocity or cruelty” (and yes, a couple precede the birth of the state).

1946. Zionist militias blow up the south wing of the King David Hotel, killing 91 people, most of them civilians, in order to protest British rule of Palestine.

1948. Zionist militias kill over 100 civilians in the village of Deir Yassin, which is on the road to Jerusalem. The action helps clear the road for the military advance on Jerusalem and scares thousands of other Palestinians who flee their villages. The name Deir Yassin becomes a rallying cry for Palestinians for decades to come though no one is punished. An officer with responsibility for the massacre, Menachem Begin, became Israeli prime minister 29 years later.

1948. During the expulsion of Palestinians from the central Israeli city of Lydda, more than 100 men are rounded up and held in a mosque and later massacred (according to Reja-e Busailah’s new book and others). The episode terrifies thousands of other Palestinians who seek refuge in the West Bank.

1948. Hundreds of Palestinian civilians are killed by Israeli forces in Al Dawayima village, west of Hebron. Many are killed in barbarous manner; the crime is swept under the rug for decades.

1953. Israeli troops led by Ariel Sharon raid the village of Qibya in the Jordanian-occupied West Bank and kill 69 people, most of them women and children, in retaliation for a cross-border raid that killed three Israelis. (The massacre is memorialized in Nathan Englander’s latest novel as one that solidifies Sharon’s reputation as an officer who will exact swift and awful revenge on those who harm Jews, thereby assuring his rise.)

1956. Israeli forces gun down farmers in Kfar Qasim returning from the fields who are unaware that the village had been placed under a strict curfew by the Israeli government earlier that day. Forty-eight Palestinian citizens of Israel are killed, many women and children.

1956. Israeli forces kill 275 Palestinians in Gaza in the midst of the Suez Crisis. The massacre is documented by Joe Sacco in Footnotes in Gaza.

1967. Israeli forces are said to have killed scores of Egyptian army prisoners in the Sinai during the 1967 War. Some say 100s.

1970. Israel killed 46 Egyptian children and wounded 50 others during an air raid on a primary school in the village of Bahr el-Baqar, Egypt. Known as the Bahr el-Baqar Massacre, the assault completely destroyed the school and was part of the Priha (Blossoms) Operations during the War of Attrition.

1982. The Sabra and Shatilla massacres of Palestinians in Beirut refugee camps are carried out by Lebanese Phalangist militias. But the Israel Defense Forces had control of the area and Ariel Sharon allows the militias to go into the camps. Somewhere between several hundred and 3000 Palestinians are murdered. Sharon, who died in 2014, escaped punishment for war crimes; in fact, he became an Israeli prime minister.

1996. The first Qana massacre takes place when Israeli missiles strike a UN compound in southern Lebanon where many civilians have gathered seeking refuge during clashes between Israel and Hezbollah. Over 100 civilians are killed. “Israel was universally condemned, and the United States intervened to extricate its ally from the quagmire,” Avi Shlaim writes in The Iron Wall.

2006. The second Qana massacre takes place during the Lebanon war when Israeli missiles strike a building in a village outside Qana, killing 36 civilians, including 16 children. The strike is initially defended as a response to the firing of Katyusha rockets at Israel from civilian areas.

2008-2009. During Cast Lead, the Israeli assault on Gaza following exchanges of rocket/missile attacks in months before, more than 1400 Palestinians are killed over 22 days, most of them civilians. Many die as at Qana, when they flee their homes to UN compounds and schools, hoping to be safe. The massacre brings international condemnation, including by the Goldstone Report to the UN Human Rights Council alleging war crimes; but the United States does its utmost under President Obama to defend Israel from all charges, and no one is brought to the bar.

2012.  During eight days of “Pillar of Clouds,” Israel kills 160 Palestinians in Gaza, most of them civilians. The offensive boosts Netanyahu in the polls and seems timed to torpedo Palestine’s historic UN bid for statehood.

2014. Another Israeli onslaught on Gaza, this one lasting 51 days, kills upwards of 2200 Palestinians, most of them civilians. The massacre is famous for sniper killings of unarmed people and for the killings of entire families, 89 according to some authorities, typically wiped out in their homes by a missile strike. In one instance, 20 members of one family are killed. The international condemnation is again toothless.

25 years after an Israeli massacred 29 Palestinians, victims are still being punished

Today marks the 69th anniversary of the Deir Yassin massacre

How Israel Systematically Hides Evidence of 1948 Expulsion of Arabs