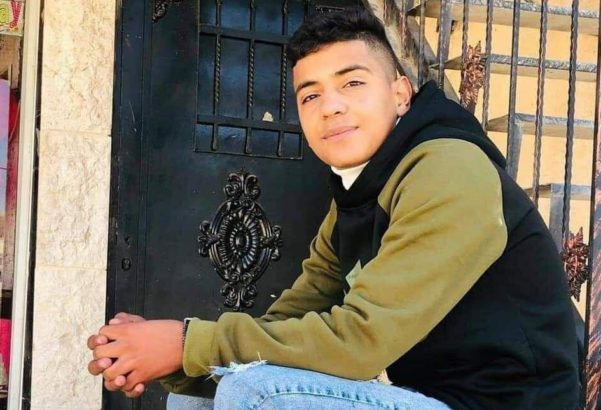 When Mohammad Said Mohammad Hamayel, 16, was killed, Beita village residents were protesting against a new illegal Israeli outpost recently established on the village’s land. Israeli forces are rarely held accountable for grave violations against Palestinian children, including unlawful killings and excessive use of force.

Israeli forces shot Mohammad Said Mohammad Hamayel, 16, with live ammunition around 4:30 p.m. today during a protest in the village of Beita, located southeast of Nablus in the occupied West Bank. The bullet entered the right side of Mohammad’s chest and exited the left side, striking him in the left arm, according to documentation collected by Defense for Children International – Palestine. Mohammad was taken to the Beita field hospital where he was pronounced dead.

“Israeli forces frequently use live ammunition for crowd control to disperse protesters, ignoring their obligation under international law to only resort to intentional lethal force when a direct, mortal threat to life or of serious injury exists,” said Ayed Abu Eqtaish, accountability program director at DCIP. “Systemic impunity has fostered an environment where Israeli forces know no bounds.”

When Mohammad was killed, Beita village residents were protesting against a new illegal Israeli outpost recently established on the village’s land. In the last month, Israeli settlers have established a new illegal outpost, Evyatar, on lands belonging to Beita and two other Palestinian villages, Qabalan and Yatma, Haaretz reported this week. The outpost, which already has around 40 structures, was established on a hill that was the site of an Israeli army base in the 1980s, according to Haaretz.

Since 2013, Israeli forces and settlers have killed at least 168 Palestinian children in the Occupied Palestinian Territory with live ammunition and crowd-control weapons, according to documentation collected by DCIP.

Mohammad is the eighth child from the occupied West Bank shot and killed by Israeli forces this year. On May 5, Israeli forces shot and killed 16-year-old Said Yousef Mohammad Odeh in Odala, a neighboring village about one mile north of Beita. Israeli forces reportedly confronted Palestinian youth at the village entrance prior to Said’s shooting. Said did not pose any threat to Israeli forces at the time he was shot, according to information collected by DCIP.

Under international law, intentional lethal force is only justified in circumstances where a direct threat to life or serious injury is present. However, investigations and evidence collected by DCIP regularly suggest that Israeli forces use lethal force against Palestinian children in circumstances that may amount to extrajudicial or wilful killings.

Israeli forces are rarely held accountable for grave violations against Palestinian children, including unlawful killings and excessive use of force. According to Yesh Din, an Israeli human rights organization, around 80 percent of complaints filed with Israeli authorities by Palestinians for alleged violations and harm by Israeli soldiers between 2017 and 2018 were closed with no criminal investigation opened. Of complaints where a criminal investigation was opened, only three incidents (3.2 percent) resulted in indictments. Overall, the chances that a complaint leads to an indictment of an Israeli soldier for violence, including killing, or other harm is 0.7 percent, according to Yesh Din.

An outpost is an emerging illegal Israeli settlement initially established as small communities on hilltops throughout the West Bank, generally located nearby or in between larger permanent illegal settlements. They house a few families or several settler youths living in trailers and other temporary shelters with only basic infrastructure. Funding and support from private donors and the Israeli government help to construct roads and infrastructure and eventually transform the outpost into a permanent Jewish-only Israeli settlement.

Israel’s settlements in the occupied West Bank, including East Jerusalem, are illegal under international law. Israel’s policy of settling its civilians in occupied territory is a serious violation of international humanitarian law and amounts to a war crime under the Rome Statute of the International Criminal Court.