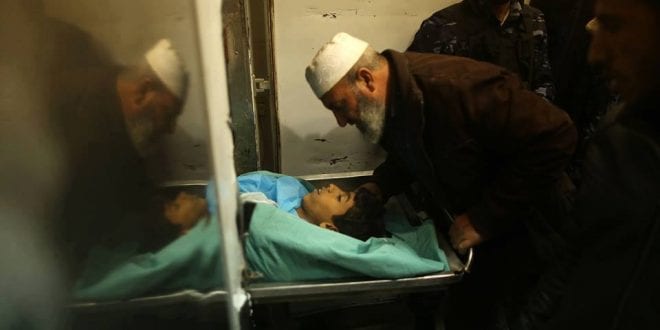 Two Palestinian teens have been killed and three others seriously wounded in clashes with Israeli soldiers in Gaza and the West Bank on Thursday, the Palestinian Health Ministry reported.

Both fatalities were 16 years of age, the ministry said. One fatality occured at protests at the Gaza border, the second at clashes near the West Bank city of Nablus.

According to medical sources a Palestinian teen from the Gaza Strip was killed Thursday evening east of Burij refugee camp in the center, after he was hit with a bullet in his chest.

The Shuhada Al-Aqsa Hospital in Deir al-Balah city said 16-year-old Ameer Abu Musaed was killed when a bullet penetrated his chest during clashes east of the refugee camp.

Three others were wounded with one whose injury was described as critical.

In another clash in the west bank Ali Omar Nimer Qino, 16 years old, from Iraq Burin village in Nablus district, was shot by the Israeli occupation forces in the head after clashes broke out in the village Thursday evening.

The clashes took place after a group of extremist settlers attempted to storm the village and attack the citizens and their properties.

Ghassan Daglas, a Palestinian official in the northern West Bank, said that one citizen was shot by the Israeli occupation in the head, during clashes in the village of Iraq Burin, during an settlers attempt to attack citizens.

A resident of the village said it seems as if there has been a change in the soldiers’ rules of engagement. “In previous clashes in the area in recent weeks there were many wounded, it didn’t feel like the soldiers are shooting to kill. This time its different.”

See this Timeline for a list of previous Palestinians and Israelis killed.