You Are Here: Home → Israeli Forces Kill Two Palestinian Boys in Gaza Who Posed No Threat 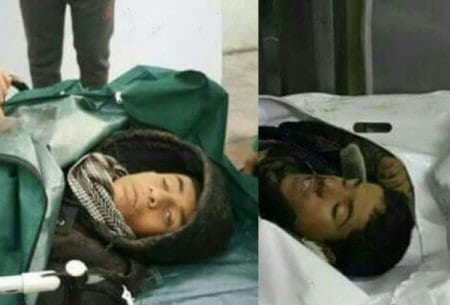 Salem Mohammad Suleiman Sabbah, 17, and ‘Abdullah Ayman Salim Irmeilat, 15, bled to death from shrapnel wounds this weekend as they were shot with artillery shells near the Gaza – Israel border.

As the blockade of Gaza enters its 11th year, the economic and humanitarian situation has become so dire that youth are beginning to take the risk of crossing into Israel to find work. When 6 boys tried this on Saturday, they were shot at by Israeli forces, although they posed no threat. 2 of the boys made it back home, 2 were injured, and 2 didn’t make it out alive.

The Palestinian Centre for Human Rights calls on the international community to pressure Israel, and seeks justice where Israel has violated the 4th Geneva Convention.

from PCHR, the Palestinian Centre for Human Rights

In a new war crime and without any justification or reason endangering soldiers’ life, on Saturday afternoon, 17 February 2018, Israeli forces killed two Palestinian children and wounded 2 others after the Israeli forces fired artillery shells at them near the border fence with Israel in al-Shokah village, east of Rafah City.

Investigations conducted by the Palestinian Center for Human Rights (PCHR) emphasize that the shelling violates the principle of distinction and military necessity, and use of force was unjustifiable, socially that the two killed children and the other wounded were only unarmed civilians who did not carry out any act that would endanger the life of Israeli soldiers.

According to PCHR’s investigations, at approximately 21:30 on Saturday, 17 February 2018, Israeli forces stationed along the border fence with Israeli near al-Shokah village, east of Rafah City, fired around 10 artillery shells and opened fire at 4 Palestinian children, who were 30 to 50 meters away from the fence intending to sneak into Israel to work there, according to the testimony of one of the two wounded children.

Shrapnel of artillery shells and live bullets hit the four children in various parts of their bodies.  Two of them were immediately transferred to Abu Yousif Annajar Hospital in Rafah City as they ran to the west until the medical staffs evacuated them.  The doctors described their condition as moderate while the medical crews could not reach the two other children as it was very late and increasingly dangerous.

At approximately 06:15 on Sunday, 18 February 2018, the Palestine Red Crescent Society (PRCS) ambulance crews managed to access the area and transfer the bodies of the two children namely Salem Mohammed Soliman Sabbah (17) and ‘Abdullah Ayman Salim Irmeilat (15).  As it turned out, they bled to death after being hit with shrapnel throughout their bodies.

The PRCS crews said that they evacuated two wounded children yesterday afternoon and could not find the two other children.  However, in the morning, they could evacuate their bodies that were 30 to 50 meters away from the border fence with Israel.  They added that the two children died after being hit with shrapnel throughout their bodies.

PCHR condemns this crime which further proves that the Israeli forces continue to use lethal force against Palestinian civilians to intentionally kill them even without posing any threat to the soldiers’ life.

PCHR indicates that the deteriorating humanitarian and economic situation in the Gaza Strip has increasingly frustrated youth, making them think of sneaking into Israel to find jobs.  A fact that requires all bear their responsibilities to end this situation resulting from increasingly tightening the Israeli closure for 11 years in addition to the sanctions on the Gaza Strip.

PCHR also reiterates its call upon the international community to act immediately to stop the Israeli crimes and upon the High Contracting Parties to the 1949 Fourth Geneva Convention to fulfill their obligations under Article 1; i.e., to respect and ensure respect for the Convention in all circumstances and their obligations under Article 146 to prosecute persons alleged to commit grave breaches of the Fourth Geneva Convention.

These grave breaches constitute war crimes under Article 147 of the same Convention and Protocol (I) Additional to the Geneva Conventions regarding the guarantee of Palestinian civilians’ right to protection in the oPt.

For a list of all Palestinian and Israeli children killed by the other side since 2000, see the Children section on the Israel-Palestine Timeline. (The last Israeli youth to be killed was in June 2016. Since that time 40 Palestinian youths have been killed.) 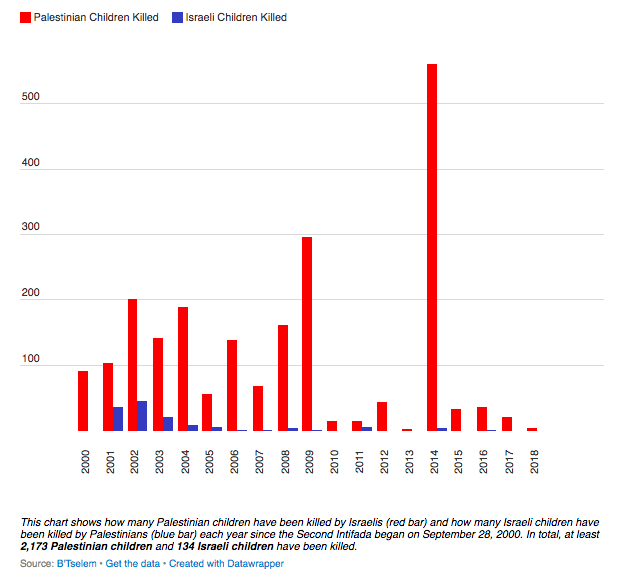