You Are Here: Home → Israeli forces abducted 520 Palestinians in July 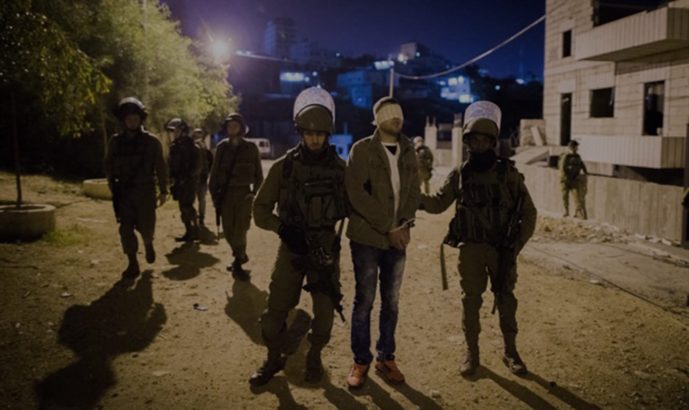 There are many aspects of Palestinian daily life that U.S. media reports rarely cover. One of them is the fact that every day Israeli soldiers invade Palestinian towns and villages and abduct people at will – in July the abductees included 69 children, nine women and five journalists… Israeli soldiers demolished, on Wednesday morning, a Palestinian home, consisting of two apartments, in the al-‘Isawiya town, in occupied East Jerusalem, under the pretense that it was constructed without a permit. Eyewitnesses said dozens of soldiers and officers, in addition to undercover forces, invaded the town, after isolating it, and […] Israeli soldiers abducted, on Wednesday at dawn, six Palestinians, from their homes in Jenin, in northern West Bank, and in Tubas, in northeastern West Bank, the Palestinian Prisoners’ Society (PPS) has reported. The PPS office in Tubas said the soldiers invaded and searched several homes, and abducted Omar Hamza Daraghma […] Israeli soldiers abducted, on Wednesday at dawn, two Palestinians from their homes, in Teqoua’ town, east of Bethlehem. The soldiers invaded the town from several directions, before breaking into a number of homes and violently searching them. The soldiers then abducted Mousa Khalil al-‘Amour, 17, and a former political prisoner, […] In July 2018, Israeli occupation forces arrested 520 Palestinians from the occupied Palestinian territories, including 69 children, nine women and five journalists, according to Palestinian human rights and prisoners’ institutions that released their monthly report on 13 August. This translation was produced by Samidoun Palestinian Prisoner Solidarity Network. The Israeli occupation authorities […]