You Are Here: Home → U.S. media continue to cover up U.S. aid to Israel, as Trump signs latest bill 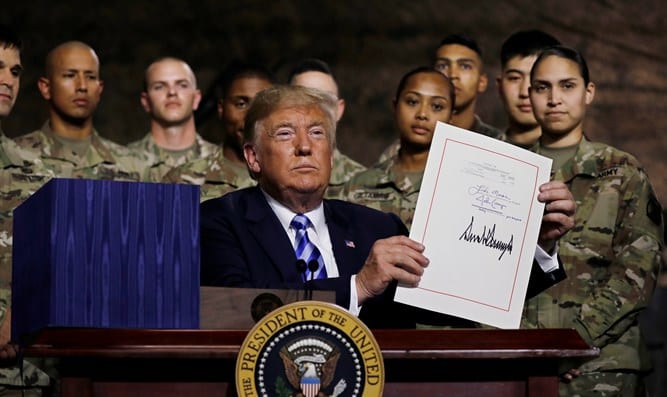 President Trump holds up the National Defense Authorization Act after signing it on Monday, August 13, 2018. The bill includes $5.5 billion to Israel.

U.S. Legislation to give Israel $38 billion over the next 10 years is steadily working its way through to completion, Trump just signing one of the bills giving US tax money to Israel. While this is the largest such aid package in U.S. history, U.S. media are not informing Americans of the legislation

While Israeli media reported on the aid to Israel, no U.S. media reports on the military bill seem to have mentioned the allocation to Israel. For example, an in depth PBS examination of the bill mentions aid to Ukraine, which gets a fraction of the amount to Israel, but fails to mention the money to Israel.

A separate bill is currently being considered in Congress: “The United States-Israel Security Assistance Authorization Act of 2018.” This recently passed the Senate and is now awaiting full House approval. It is currently in committee.

It appears that no national U.S. news media have reported on these bills, despite the fact that this is the largest such aid package in U.S. history.

While this U.S. legislation is being covered regularly in Israel, the lack of U.S. coverage suggests that most Americans have no idea these bills are before Congress.

Israel lobby organizations such as AIPAC and the ADL are pushing the bills. Jewish Voice reports: “More than 100,000 citizens from across the country work with their elected officials and AIPAC staff to strengthen the bonds between the United States and the Jewish state.”

The article explains: “AIPAC members in all 50 states are encouraged to be politically active and develop relationships with their members of Congress to help educate them about the importance of U.S.-Israel ties.

“Beyond building support in Washington, AIPAC engages pro-Israel activists across the country through a vibrant network of 10 regional offices and seven satellite offices. Pro-Israel activists from Missoula to Miami work hand-in-hand with AIPAC staff to improve the future and security of the United States and Israel, according to the website.”

To learn more and take action on this bill, go here.