You Are Here: Home → Israeli bomb hoaxer charged with trying to extort US Senator, threatening to kill ex-Pentagon official’s kids 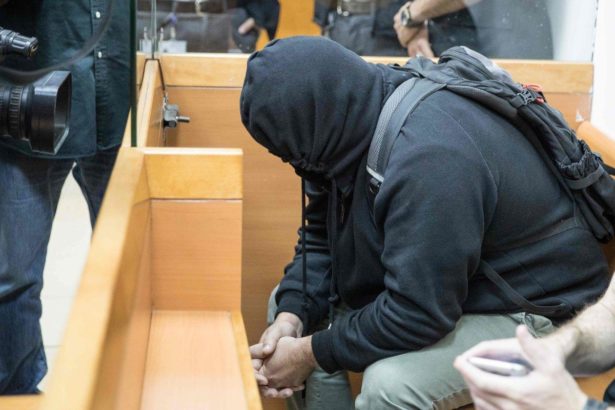 The Israeli-American youth suspected of making threatening phone calls to Jewish community centers in the United States was charged on Monday in Tel Aviv Magistrate’s Court with various crimes, including trying to extort a United States senator.

The indictment against the 18-year-old includes allegations that he made threats to 2,000 different institutions around the world, including the Israeli embassy in Washington, the Israeli consulate in Miami, schools, malls, police stations, hospitals and airlines. The crimes cited in the indictment include extortion, publishing false reports causing public panic, conspiring to commit a crime, hacking computers to commit a crime, and violations of money-laundering laws.

According to the indictment, the suspect tried to extort Ernesto Lopez, a Republican senator of Delaware, for criticizing whoever had made the threatening calls. The suspect called Lopez and demanded that he retract his comments, saying that if Lopez failed to, he would fine him in Bitcoin every 72 hours and if he didn’t pay, he would incriminate him on the internet. When the politician did not respond, the suspect ordered drugs online and sent them to his house in order to incriminate him. When the envelopes arrived the suspect threatened to publish pictures attesting to the fact that he had drugs in his house.

The teenager is also charged with calling George E. Little, a former official at the U.S. Department of Defense, and threatening to kidnap and murder his children.

Charges against the suspect were also filed Friday in Florida. That indictment cites scores of messages graphically describing children’s deaths in calls to Jewish community centers and schools across the United States, using an online calling service to disguise his voice as a woman and hide his identity.

“These threats of violence instilled terror in Jewish and other communities across this country and our investigation into these acts as possible hate crimes continues,” Attorney General Jeff Sessions said in a statement Friday. The indictment lists 28 crimes, including transferring false information and making threatening calls.

Israel’s State Prosecutor Shai Nitzan is opposed to allowing the extradition to the United States of the suspect, who was arrested at his home in the southern Israeli city of Ashkelon a month ago.

A formal extradition request has not been filed, but in informal negotiations Israeli justice officials have said they want to prosecute the suspect in Israel. Despite the cooperation with the FBI that led to the suspect’s arrest, Nitzan believes the dual citizen should be tried in Israel because of the strong connection between the alleged offenses and the state.

Shira Nir, a lawyer for the suspect , said in a statement on Sunday that the text of the indictment will “clarify once again my client’s medical condition.”

“It seems that every paragraph is additional proof of his inability” to stand trial “as a result of the growth and his emotional state,” Nir said. The suspect’s family has claimed since his arrest was made public that the teen suffers from mental illness and a brain tumor that affects his behavior.

“It may be a blow to Jewish pride and a political black eye to those who blamed the Trump camp for the JCC threats, but this means that a fearful Jewish community can finally exhale. Is there anything worse than conspiracy theorists appearing to be right?”

“Jews cried foul when President Donald Trump bizarrely appeared to pin blame on his opponents for being behind the disturbing waves of bomb threats at Jewish centers, hinting at a false flag operation designed to make him look bad. ”

“Now, those who condemned and criticized Trump are bemoaning the fact that his strange comments contained a grain of truth – the primary suspect is, in fact, Jewish.”

“Justifiably, Trump’s Jewish critics on the left – present company included – feel a measure of shock, dismay and embarrassed by Thursday’s development. It already felt like a stain on liberals when a disgraced African-American former journalist from a left-wing website Juan Thompson, was arrested in early March, charged with eight JCC threats, as some sort of bizarre revenge plot against his Jewish girlfriend.”

[Ed. Note: Jewish Voice for Peace leader Rabbi Alissa Wise had written: “Trump’s seeming implication that it could be Jews behind these anti-Jewish attacks shakes me to my core. This is a truly disgusting form of victim-blaming. Only a person who is so cynical, so divorced from basic morality and decency, can make such a claim…”]

“Still, it was pointed out at the time that Thompson appeared only to be a small-time copycat. Surely the bulk of the automated hoax calls, Jews and non-Jews on the left told themselves, were perpetrated by the alt-right white supremacists they were sure committed these terrible deeds. Others were equally convinced that it was more likely that Islamist anti-Israel terrorists could be behind the threats….”

US News and World Report reports that the man (variously described as 18 years old and as 19 years old) earned $240,000 for the threats…

According to a price list posted by the suspect, customers could order a threat of a “massacre at a private home” for $40, a call threatening a “school massacre” for $80 and a bomb threat against an airliner for $500, the indictment said.

“The accused even asked customers to contact him if they had special requests for threats against other targets and to receive a customized quote,” according to the charge sheet.

One bomb hoax targeted a plane in which the Boston Celtics basketball team was traveling in December 2016, and another was made against Delaware state Senator Ernesto Lopez, who apparently drew the teen’s attention by denouncing threats made against JCCs, the prosecutors said.

If convicted in Israel, he faces up to 10 years in jail, prosecutor Jonathan Hadad told Reuters after charges were filed in the court. Israeli authorities withheld his name because he was a minor when some of the alleged crimes were committed.

Separate criminal complaints filed on Friday in U.S. federal courts in Florida and Georgia that linked the suspect to hundreds of hoax calls between 2015 and 2017 identified him as Michael Ron Kadar.

A judicial source said that at present, Israel had not received a formal extradition request from the United States. The U.S. Federal Bureau of Investigation took part in the probe.

“There have been contacts regarding the matter but as of now our position is not to extradite for many reasons,” the source said. “He was a minor when he committed some of the offences, the threats were made in Israel too and in other countries, not just in the United States, and there are also claims as to his mental state.”

IsraellyCool comments that the current news “has received much more muted coverage in the US” than the original bomb threats.