You Are Here: Home → Israeli airstrikes kill Palestinian in northern Gaza, wound 8 others 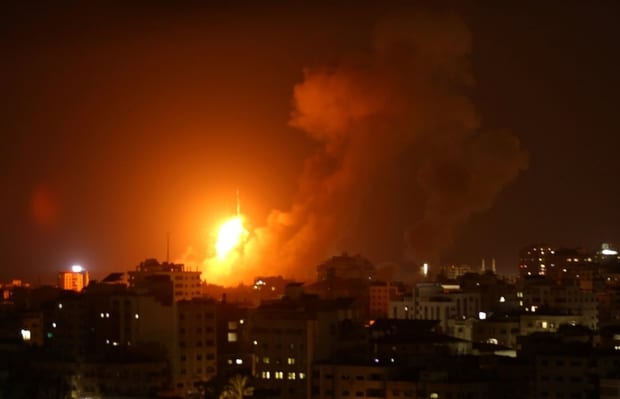 Israeli soldiers continued, on Wednesday night, the bombardment of several parts of the Gaza Strip, killing one man in northern Gaza, and wounding at least eight others.  [Editor’s Note: Unlike Israeli authorities, Palestinian medical authorities don’t include those suffering from shock among the number of injured.]

The Health Ministry in Gaza has confirmed that Israeli soldiers killed Ali al-Ghandour, 30, in northern Gaza, and wounded at least two others, one seriously.

The slain Palestinian, and the wounded, were moved to the Indonesian Hospital, in northern Gaza.

The Palestinians who were attacked were in a car which was struck by a missile fired by an Israeli army drone.

The Health Ministry added that Israeli missiles also mildly injured three Palestinians in Gaza city, before they were rushed to the Shifa Medical Center.

Furthermore, the army fired shells into Deir al-Balah, in central Gaza, mildly wounding one Palestinian, who was moved to Al-Aqsa Hospital.

The Israeli missiles also targeted areas in Rafah city, in the southern part of the Gaza Strip, while at least seven missiles struck the Sudaniyya area, northwest of Gaza city, in addition to another sites, west of Gaza city, while an army drone fired a missile into a resistance center in Beit Lahia, in northern Gaza.

Media sources in Gaza said the targeted areas in Gaza included a concrete factory, which was hit with three missiles.

The Israeli army claimed that it struck twelve targets in Gaza, including one tunnel, after four shells were reportedly fired from the coastal region by Palestinian resistance fighters, causing injuries and damage inside Israel.

Israeli Ynet News quoted a source at Barzilai Hospital stating that eight Israelis were lightly wounded, in addition to one man, who suffered moderate wounds and was rushed to surgery.

It added that seventeen Israelis “were injured, most of whom were treated for shock”, and said that “three pregnant women started having labor contractions due to the stress.”

For its part, the Islamic Jihad Movement in Palestine said the Palestinian resistance fired shells in “retaliation for the ongoing and escalating Israeli crimes, including the killing of two Qassam fighters of Hamas during training.”

“The retaliation by the Palestinian resistance is legitimate; the enemy must understand that it cannot keep killing and attacking our people, and covering its crimes with lies and fabrications.”

Both the Islamic Jihad and the al-Qassam Brigades of Hamas, said that the Palestinian armed resistance will retaliate in response to the Israeli escalation, and affirmed that “Israeli bombardment will be met by Palestinian shelling, escalation will be met by retaliation.”

The Al-Qassam Brigades, the armed wing of Hamas, issued a statement denouncing the Israeli assassination the two fighters, and holding Israel accountable for any future escalation.

The Brigades stated that the two fighters were part of a military training in “Asqalan” center, one of its training locations in northern Gaza, and that many Palestinians, including political leaders of Hamas, were in attendance.

For a list of Palestinians and Israelis killed since 2000 see this timeline.