You Are Here: Home → Israel Police Prevented Palestinian Detainee from Breastfeeding Her Baby 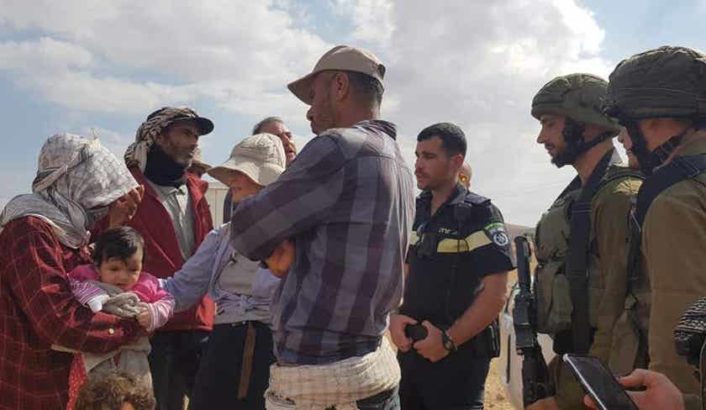 By Hagar Shezaf, reposted from Ha’aretz

Israeli police officers prevented a detained Palestinian woman from breastfeeding her three-month-old daughter for approximately four hours on Monday. The woman, Najia Bisharat, was suspected of throwing rocks at an Israeli vehicle but was released without restrictive conditions at the end of her questioning. The police did not explain why Bisharat was denied permission to breastfeed her daughter for hours.

A resident of the village of Khirbet Makhoul in the Jordan Valley, Bisharat was detained on Monday. She was taken to the Shaar Binyamin police station together with her daughter and an Israeli activist, where she waited many hours for a language interpreter.

Since the interpreter did not arrive at the station, Bisharat’s interrogation could not take place – and after three hours her status  was changed from detainee to arrestee. Consequently, her daughter was taken away from her and her feet were shackled.

Bisharat’s husband, Yousef, and several Israeli activists came to the station to show support. When the baby cried, one of the activists, Amir Pansky, asked the police officers to allow Bisharat to breastfeed her daughter, but was told he was “causing provocations.”

Pansky said he was told by the officers to buy baby formula at a nearby supermarket, but the baby wouldn’t feed from a bottle as she was not used to formula. Hagar Geffen, another activist who was present at the scene, told Haaretz that when an attempt was made to bottle-feed the baby, she threw up.

Bisharat was only allowed to reunite with her daughter four hours into her formal arrest. Meanwhile, it took eight hours for an interpreter to arrive so that her interrogation could begin. Bisharat was interrogated by a man, even though she was promised the interrogator would be a woman.

After her interrogation, Bisharat, a resident of Area C of the West Bank (which is under full Israeli control), was handed over to the Palestinian Authority police, despite the fact that they have no jurisdiction in Area C.

Shortly thereafter, Bisharat was released to her home in Khirbet Makhoul, a sheep-herding community. Israeli Police placed no restrictive conditions on Bisharat, and declined to comment as to why she was handed over to the Palestinian police.

Attorneys Riham Nasra and Michal Pomerantz, representing Bisharat, said that she denied the allegations against her in her interrogation, and that several days prior she was attacked by settlers.

“When we advised her prior to her interrogation, she was upset and scared for her baby. Her voice trembled and all she could think of was how she could hold her child again,” said the lawyers. “This is another example of a needless arrest, entailing potential health damages to mother and baby, just to appease the settlers who filed the complaint.”

The Police said in response that “Upon receiving reports of rocks thrown at a vehicle near the settlement of Hemda, police arrived at the scene and arrested a suspect. At this point an investigation is ongoing in the course of which an Arabic-speaking interpreter was summoned.”