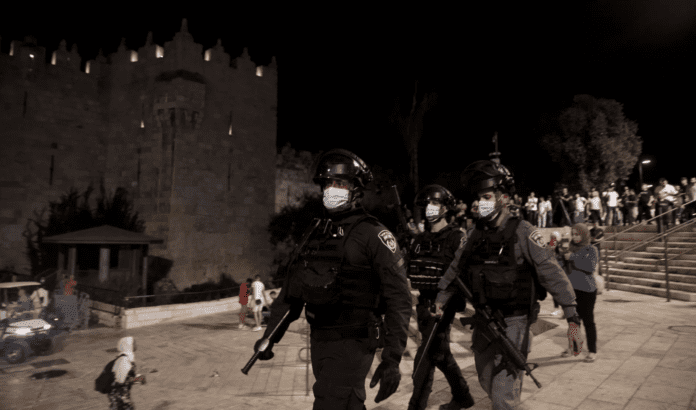 A video from the scene shows an Israeli police officer forcefully hitting a Palestinian man with a bat. The Palestinian’s crime: ID’ing another officer who had assaulted him. Israeli officials promise an “investigation.”

[NOTE: police brutality against Palestinians, at the hands of Israeli officers, is an everyday occurrence in Israel and the Occupied Palestinian Territories. Occasionally an incident reaches Israeli newspapers.]

A Jerusalem police officer beat up on Tuesday a Palestinian man who complained to him that another officer had assaulted him.

In a video of the incident, near the Old City’s Damascus Gate, the officer can be seen asking the man in Arabic, “Who beat you up?” The man then points at another officer who was standing nearby.

At this point, the Israeli officer tells the man: “Do you want me to hit your other leg?” Shortly after, the officer can be seen forcefully hitting him with a bat. The man then ran away.

The footage was shared on social media by Itamar Carmon of the All World News website.

Israel Police said in response that officers were in the area to disperse rioters. “The officers pushed away those who did not heed to their orders, including the man seen in the footage,” it said in a statement.

“Having said that, the incident will be examined and handled as needed,” the police added.

On Wednesday, the Justice Ministry said it has launched an investigation into the incident.

The past week has seen a renewed rise in tensions in Jerusalem following a series of violent incidents. On Sunday, police clashed with Palestinians in East Jerusalem after human remains were unearthed during construction work near the Old City walls.

A day earlier, Palestinians hurled stones at Jews near Damascus Gate. The police responded with riot control gear, and footage of the clashes showed officers using police attack dogs to disperse the crowd.

On Thursday, a Palestinian family was attacked in Jerusalem’s city center by several Jewish youths.