You Are Here: Home → Israel’s Covid response is a “moral failure” – WHO

Israel’s Covid response is a “moral failure” – WHO 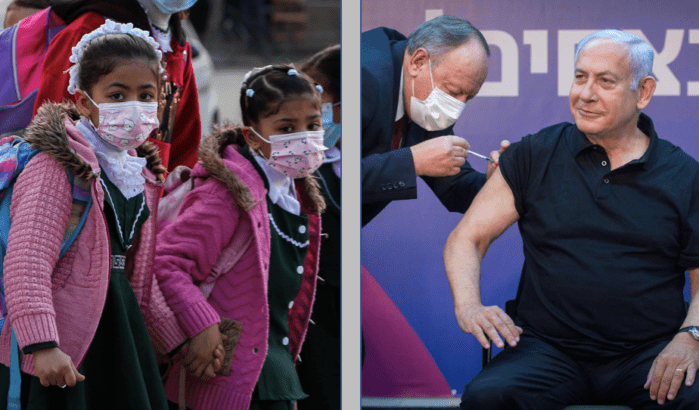 Two different worlds exist side by side: one is oppressed, one is privileged. Only the privileged world – Israel – has access to the Covid vaccine.

While Israel boasts of its great Covid vaccine rollout, it keeps making very public, deliberate decisions to snub Palestinians – even though as the occupying power it’s responsible for their welfare. Can the world keep ignoring such delinquency?

UPDATE: Reuters reports: “Israel has frozen its programme to send COVID-19 vaccines abroad to buy international goodwill…after the initiative came under legal scrutiny.” The report indicates that Czech Republic and Honduras have already gotten theirs; 17 additional countries were also slated for shipments.

This is just the latest in a number of reversals Israel has made in its Covid vaccine project, proving yet again that Israel is willing to concede some of its policies when enough pressure is exerted.

Note that this policy change does not shift vaccines to Palestinians, only freezes Israel’s giveaway plans.

Israel has vaccinated nearly half of its population and is actually starting to reopen. On top of that, Israel has such a huge supply of vaccines left over that it has begun sharing them – with countries that are willing to boost Israel’s veneer of legitimacy.

For a state that repeatedly blames the United Nations and the International Criminal Court for “being political,” the move is shamelessly political.

The term “vaccine diplomacy” puts a gentle spin on a highly questionable practice. Granted, a sovereign state has the right to distribute its resources as it sees fit. But is it fitting to leverage a nation’s vaccine supplies for political gain – when huge numbers of that nation’s dependents remain unvaccinated?

The director general of the World Health Organization (WHO) says No:

I need to be blunt: the world is on the brink of a catastrophic moral failure – and the price of this failure will be paid with lives and livelihoods in the world’s poorest countries.

This precisely describes Israel, whose Covid vaccine policy is considered by critics to be nothing short of “medical apartheid.”

Israel’s rollout, perhaps the most efficient in the world, was at first hailed as a near-miracle. The glow of success faded quickly, though, when human rights organizations examined the details.

They knew what to look for. Israel has been a documented human rights abuser for most or all of its existence. Palestinians have been on the receiving end of occupation, land theft, home demolition, and various forms of ethnic cleansing for over 70 years.

World bodies are fully aware of this, as reports are churned out every year, enumerating Israel’s violations of international law (Palestinians have also been cited for violations).

The Jewish State has been censured in 700 UN resolutions, and is currently embroiled in a war crimes case in the International Criminal Court – but has yet to face any actual consequences for its actions.

It was no surprise then to find that in the era of Covid, Israel’s actions have been, well, less than honorable.

Refusal to abide by international law

According to the laws of occupation in the Fourth Geneva Convention, an occupying force is required to provide medical services to the occupied population, including “measures necessary to combat the spread of contagious diseases and epidemics.”

Even as Israel brushes off its closest neighbor and its internationally-recognized obligations, its administration is busily making other deals.

As the Associated Press reports, Israel is preparing shipments of vaccines for the Czech Republic, Hungary, Guatemala, Honduras – all states with poor human rights records – and one other “unnamed country.”

The anonymous source insisted that the gesture is purely charitable, “not in exchange for any diplomatic favors.” Coincidentally, each of these countries has, or pledged to have, an official presence in Jerusalem – echoes of the 2018 US embassy move from Tel Aviv, which amounted to a tacit acknowledgement of Jerusalem as the capital of Israel (highly contentious because Palestinians also hope to make Jerusalem their capital someday).

In one more affront to Palestinians, Netanyahu’s government has even made a vaccine deal with its own archenemy, Syria. Israel has agreed to buy $1.2 million worth of Covid vaccines from Russia to give to Syria in exchange for an Israeli civilian being detained in Syria (Syria denies the existence of the deal).

Apparently, Israel is willing to help its enemies before it lifts a finger for the Palestinian people under its mandate as an occupying power.”

Prime Minister Netanyahu confirmed the vaccine-sharing: “Our supply is beyond what is needed by the citizens of Israel. We have more than enough to help where we can. It is mostly symbolic.”

This is a loaded statement. Netanyahu knows exactly what he is implying here: Palestinians are invisible. Gaza and the West Bank are still “a land without people.”

Most of the time.

Not asking for much

After being lambasted by human rights groups around the world for weeks, Israel finally acknowledged (briefly) the presence of roughly 5 million Palestinian Palestinian men, women, and children that are not part of its state but are under its care. This moment of clarity (or self-preservation) caused the Israeli government to donate all of 2,000 doses of the vaccine to the Palestinian Authority (PA).

To be clear, the PA had requested 10,000 for its frontline workers, and Israel promised 5,000 more than 3 weeks ago – but as of this writing, the balance of the promise remains unkept.

In addition, a donation of 2,000 doses that the PA received from Russia could not make the 50-mile trip to Gaza without being blocked by Israel for several days. The delay was characterized as political in nature.

NYT did the math:

Israel has pledged at least twice as many doses to faraway countries as it has so far promised to the nearly five million Palestinians living in the West Bank and Gaza Strip [under Israeli rule].

A nurse from Doctors Without Borders working in the Palestinian West Bank offers another statistic: even if/when 35,000 Covid vaccines arrive from the WHO program for poor countries, they would cover only about 0.8 percent of the Palestinian population, while just a few miles away, Israel sits on a surplus.

If asked why vulnerable people can not be vaccinated in Palestine, I do not know how to answer. It is inexplicable and unbelievable. Worse than that – it is unjust and cruel.

One move Israel has attempted to paint as benevolent (but is actually self-serving) is its proposal to vaccinate 100,000 Palestinians who regularly enter Israel to work. Israeli health minister Yuli Edelstein conceded in an interview with the BBC, that while Israel has no obligation, it is in Israel’s best interest to vaccinate some Palestinians for the safety of Israelis.

Oppression in a pandemic

Several issues cloud the joyfulness of this offer: The recipients of these vaccines would be younger and stronger, mostly men – not the at-risk Palestinian population, but Palestinians who interface with Israelis; Israel has not even managed to deliver 5,000 promised doses, so one might be tempted to doubt the likelihood of delivering 100,000; and some Palestinians are unwilling, after over 70 years of ethnic cleansing, to trust Israel’s intentions.

Israel has, since the earliest days of the pandemic, demolished or dismantled Palestinian-run Covid testing sites and care facilities, arrested volunteer workers as they disinfected schools, and stolen food intended for needy Palestinians.

Israel regularly demolishes Palestinian homes and even villages – illegal under international law – but promised when the Covid outbreak began to halt the practice for the duration. No such thing happened: 2020 ended up one of the worst for home demolitions in recent years: Israel rendered over 1,000 Palestinians homeless – half of them children.

So, while Israel trades favors with countries willing to pander to Israel’s need for affirmation, Covid cases in the Palestinian territories are on the rise. It is exactly as the WHO director said: a catastrophic moral failure.

Just a thought: if Palestinians must die of Covid-19 while Israel thrives, can it at least happen without the financial support of the United States? Instead of contributing $10 million a day to this apartheid enterprise, can we name it, shame it, and avoid our own moral failure?