You Are Here: Home → Iraq, Syria, Iran…Are We To Destroy Iran Next?

Iraq, Syria, Iran…Are We To Destroy Iran Next? 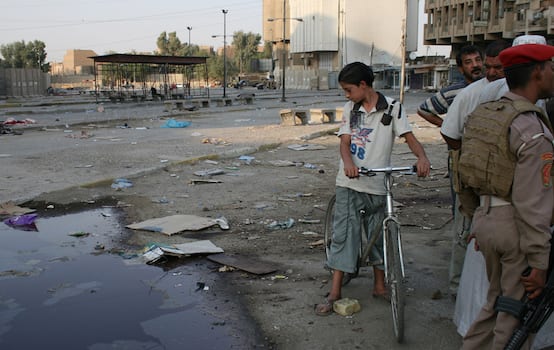 The site of a suicide bombing in Baghdad, 2010. Credit: CreativeCommons/Larisa Epatko/PBS News Hour

Utley examines possible neoconservative approaches to Iran and concludes that these would not be in the interest of peace in the region or security for the US – they would only be attractive to the pro-Israel lobby in its fundraising efforts. The best approach to Iran is through engagement.

Years ago there was a plan, A Clean Break: Project for the New American Century (PNAC), to wreck the Oslo peace accords between Israel and the Palestinians and to re-mold the Middle East. It first involved destroying Iraq or in the discredited words of Paul Wolfowitz, “The road to peace in the Middle East goes through Baghdad.”

Destroying Syria was to be next. And then Iran. In 2006, columnist Taki Theodoracopulos warned in The American Conservative of the “Clean Break” plan “to aggressively remake the strategic environments of Iraq, Palestine, Lebanon, Syria, and Iran. As they say in boxing circles, three down, two to go.” Core promoters of the PNAC plan signed an open letter to then President Clinton calling for the removal of Saddam Hussein. They were Richard Perle, Paul Wolfowitz, R. James Woolsey, Elliot Abrams, Donald Rumsfeld, Robert Zoellick and John Bolton, all solid members of the Neoconservative project.

In a short one minute video former NATO commander General Wesley Clark criticizes the plan as hatched to remake the Middle East.  Equally, it is important to remember that the chaos in Iraq (and Syria) was not unforeseen by those who promoted the American invasion. I reported in TAC in 2010 of neoconservative David Wurmser (subsequently Vice President Cheney’s principal advisor) forecasting “if Saddam Hussein were driven from power, Iraq would be ‘ripped apart by the politics of warlords, tribes, clans, sects, and key families,’ and out of the ‘coming chaos in Iraq and most probably in Syria,’ the United States and her principal allies, namely Israel and Jordan, could redraw the region’s map.” See American Prospect, “The Apprentice.”

Of course, all this was years ago, but the plan remains, supported by many powerful American war interests. To find out who, just follow the money. It’s always a useful rule.

Trump has declared that Iran is violating its nuclear agreement although all the other signatories state that it is in compliance. Undermining the Iran nuclear accord, first with Washington imposing tighter economic sanctions to bring about a pretext for attacking Iran, is now on the table as Washington’s next Middle East project.

However, the world is different from 20 years ago when the neocon plan was first hatched.  Firstly there is Iran’s agreement to dismantle its nuclear program. A Cato Institute report details all the ways Iran has complied with the agreement including giving up its stockpile of enriched uranium, dismantling two thirds of its uranium enrichment centrifuges, allowing international surveillance and other measures limiting its actions for the next 10 to 25 years.

Washington is now finding it harder to force the Europeans to go along with re-imposing sanctions. China is much stronger and might take up the trade and giant oil investments which Washington could force European companies to forego. Iran has a vastly stronger missile program to retaliate against the U.S. Navy and nearby American air bases. Iran is three times as large as Iraq and far less subject to fractional internal ethnic divisions. The pro-Israel lobby is divided although big money American donors still want Iran’s destruction. North Korea’s nuclear and new missile technology make it harder for Washington to demand concessions, while at the same time reneging on its past commitments. America’s trustworthiness is already suspect from having attacked Libya after Libya gave up its nuclear program. And even in Washington there is new congressional resistance to the President’s ability to start new wars.

The Cato report linked above, The Risks of Confrontation with Iran, explains the four confrontation options. These are:

Referencing the first option, Cato argues that European cooperation including agreement to embargo Iranian oil exports would not be agreed to again. It concludes that “European and Asian governments are likely to push back strongly against new U.S. barriers to trade and investment and on the excessive extraterritorial application of existing U.S. sanctions.”

Reference challenging Iranian influence in the region, the paper points out “previous U.S. efforts to create regional coalitions to fight terror groups have been largely unsuccessful” and is “likely to pull the U.S. more deeply into variety of regional conflicts and increase the risks of blowback to U.S. troops in the region.” Also it is questionable today that the American people can be sold on starting more wars once soldiers’ deaths start being reported in the news, nor want to pay more tens of billions of dollars to support them.

In reference option three, the major problem is “that foreign-imposed regime change generally does not improve relations between interveners and targets;  rather, it often makes them worse.” In many nations Washington’s goals are so suspect that its support for local groups is more like a kiss of death. Further, Iran’s ethnic minorities are far smaller that Iraq’s large groups. In Iran, Kurds are only 10%, Baluchis 2%, Arabs 2% and Azeri Turks 16%.  In fact the New York Times recently reported on the surging nationalism in Iran in response to Saudi and U.S. pressures, in particular all the advanced weaponry Trump promised for the Saudis.

Option four of starting a war with bombing runs against Iran “would make escalation inevitable.” U.S. “forward deployed bases (and war ships)…are within range of Iranian missiles and it is easy to imagine the vast oil facilities in the Persian Gulf being targeted as war passions would grow. This would paralyze oil exports to Europe and Asia and bring on a world economic crisis. A new American started war would also likely exacerbate America’s terrorism problems and “most likely produce profoundly negative consequences for regional security and American interests,” warns the Cato study.

One should also note that war professionals are far less enthusiastic for wars than parts of the pro-Israel Lobby for which wars and chaos help their fundraising. For example, the Huffington Post reports how much of Israel’s intelligence establishment supports the Iran agreement. The Cato report quotes an Israeli official, Carmi Gillon, that “the majority of my colleagues in the Israeli military and intelligence communities supported the deal.”

The Cato conclusion is that America’s best policy option would be for further engagement with Iran to strengthen its more moderate political factions and weaken its hardliners.  America used to be widely popular among younger Iranians who want peace and prosperity, not mullahs and wars. The greater threat is Washington’s military-industrial-Congress complex which so benefits from unending wars.

Jon Basil Utley is publisher of The American Conservative.