You Are Here: Home → In Memoriam: Legendary Leaders Lost in 2021

In Memoriam: Legendary Leaders Lost in 2021 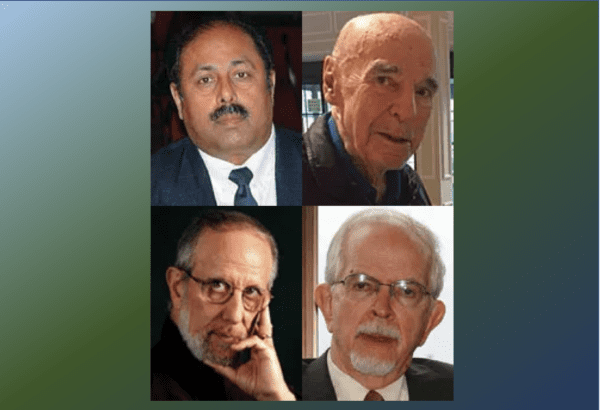 Delinda Hanley remembers four larger-than-life figures whose contributions toward peace in the Middle East have been invaluable. Their deaths are a loss to all who work in the cause of justice for Palestinians.

ONE OF THE MANY PRIVILEGES of working at the Washington Report on Middle East Affairs, is getting to know both legendary and unsung heroes. These are men and women who use their oratory, artistic and writing skills to work for peace. The world has lost some true visionaries during this pandemic, and our magazine misses their friendship.

Dr. Saeed and Richard H. Curtiss, my father as well as the co-founder of the Washington Report, were close friends who believed that Arab- and Muslim-Americans could play an important role in improving U.S. policy if they formed a powerful voting bloc.

Dr. Saeed founded the American Muslim Alliance, in 1994, to provide civic education and leadership training to American Muslims. Under his leadership, immigrant and indigenous American Muslims worked together to achieve effective political action. By rights, this poet, author and political philosopher should have spent his career surrounded by books in his comfortable office or by students in his California State University classroom in Hayward.

Instead, Saeed was constantly on the move, traveling across the United States and speaking to groups of American Muslims. This quiet man could galvanize his audience. They left a meeting eager to get out and help return America to the principles of freedom, justice, fairness and equality for all.

Former Congressman Paul Findley (R-IL) described Dr. Saeed as “a driven man,” who spent nearly every waking hour building organizations to politically empower U.S. Muslims and increase voter turnout. “He is not a lone wolf,” Findley wrote. “Far from it—he is more like the proverbial Pied Piper, a modern-day one who is able to rally scores of people to the worthy causes he embraces and the organizations he formulates.”

The attacks on the World Trade Center and the Pentagon caused the abrupt postponement of a 3 p.m. meeting, scheduled for Sept. 11, 2001, between Dr. Saeed and other national Muslim leaders and President George W. Bush. They had gathered in Washington, DC to discuss the Middle East conflict and the treatment of Muslims in America.

Days before the scheduled meeting, according to New York Times revelations, published on Oct. 2, 2001, President Bush had decided to launch a new initiative that would include U.S. support for the creation of a Palestinian state, and recommendations on crucial issues such as borders, the right of return of Palestinian refugees, the future of Jerusalem and implementation of U.N. resolutions.

That initiative was another terrible victim of 9/11. The terrorist attacks made Dr. Saeed’s work even more essential, as Muslims increasingly found themselves a target instead of a partner in a grieving nation.

Another dear friend, Prof. Sami Al-Arian, a Palestinian political activist, was caught up in the subsequent “war on terror,” and indicted on trumped up Patriot Act charges in 2003. Prof. Al-Arian recalled Dr. Saeed not only stood by him from the beginning to the end, but he also formed the American Muslim Task Force on Civil Rights and Elections (AMT) to lead efforts to end the erosion of civil liberties in the U.S. during the so-called war on terror, and to encourage American Muslims to continue to be active politically.

Magazine co-founder Curtiss lauded Dr. Saeed for his effective efforts to bring American Muslims off the political margins and onto the political playing field. Back in 1997, Curtiss shared a powerful quote by Dr. Saeed: “By now we’ve arrived at the same place as African Americans did with Jesse Jackson, who turned them into influential political activists on the national level…It’s time for us to start making our contribution to America’s uniqueness, as have so many other groups that preceded us, and who now are indispensable components of the American tapestry.”

Dr. Saeed would be pleased to know that President Joe Biden has nominated Zahid N. Quraishi, of Pakistani descent, to be the first Muslim American federal judge in U.S. history.

Thomas R. Shaker, 94 (1926-2021), a lifelong Poughkeepsie, NY resident, died on Jan. 21, 2021. He was a frequent contributor to newspaper letter columns, advocating for fairness in U.S. foreign policy in the Middle East and for Palestinian freedom. He told us he used many Washington Report articles in those letters to the editor and also remarked that he received some heat, as well as occasional support, each time those letters were published.

Shaker designed and funded ads that ran in his local paper. Each anniversary, Shaker’s ads reminded readers that Rachel Corrie was crushed to death by an American-supplied Israeli bulldozer as she blocked it from destroying the home of a Palestinian doctor on March 16, 2003.

Shaker called her a “great soldier of non-violence, she stood courageously for truth and justice, yet her country has abandoned her. She will live forever in our hearts as a beacon of liberty to the oppressed.”

In June, Shaker’s ads commemorated the 34 killed and 171 wounded crewmembers aboard the USS Liberty, attacked by Israel on June 8, 1967. He wrote “If little old Poughkeepsie can do this, other towns and cities should too!” Our staff misses his phone calls and notes.

James McKendree Wall, 92 (1928-2021), launched a blog he called “Wallwritings,” on April 27, 2008, before most Americans even knew what a blog was. It covered “news, analysis of politics, cinema, modern culture and the ambiguity of human existence addressed from a religious perspective.”

Wall received his Master of Divinity from Emory University and a Master of Arts from the University of Chicago. Ordained a minister in the United Methodist Church in 1955, he traveled to the Middle East more than 20 times, which influenced his many years of writing about the injustice he witnessed in Israel/Palestine.

From 1972 through 1999, Wall was editor and publisher of the Christian Century magazine and continued as a contributing editor from 1999 through 2017.

Wall turned the magazine into a hard-hitting news publication and covered such events as Anwar Sadat’s 1977 trip to Jerusalem, the first and second intifadas, and the 2006 Palestinian legislative election. He interviewed journalists, religious leaders, political leaders and private citizens in the region.

In 2005, Jim and his wife, Mary Eleanor Wall, were among a small group of visionaries who helped Estephan and Laurie Salameh launch the Seraj Library Project (see p. 62).

Cook and his partner, Don Shanosky, earned national recognition in 1985, when President Ronald Reagan honored them with a Presidential Design Award for their 1974 work in creating a collection of iconic public symbols. Those simple pictographs, which designate men’s and women’s restrooms, no-smoking areas, airports, train stations and many more public places, are still used today.

His iconic boxes were frequently displayed in Gallery al-Quds exhibits in Washington, DC’s Jerusalem Fund, as well as the Palestinian Museum U.S., in Woodbridge, CT. He also volunteered his time and imagination to design logos for nonprofits.

Over the years, he designed brilliant posters, including one printed in 2013 with the letters OCCUPAYTION, captioned, “U.S. Aid to Israel totals $233.7 billion over six decades, every day you pay $8.5 million more.” Another featured a keffiyeh with colorful peace buttons printed in 2014.

Cook generously donated copies of his posters as well as his unforgettable memoir, A Vision for My Father: The Life and Work of Palestinian-American Artist and Designer Rajie Cook, published in 2017 to Middle East Books and More. The book, which is still available, is a deeply personal tribute to America and the immigrants who, like his father, Najeeb Esa Cook, left all that they knew and loved to come to America.

One sight that haunts a reader is the photo of his father, who died at the age of 94, “old and blind and sitting by the radio saying he was waiting to hear something good on the radio about peace in the Middle East.” His talented son, Rajie, used his art, and his unforgettable memoir, to open eyes that may be blind to the injustice of the ongoing Palestinian Nakba.

Delinda C. Hanley is executive editor of the Washington Report.

SOME OTHER BELOVED ADVOCATES: