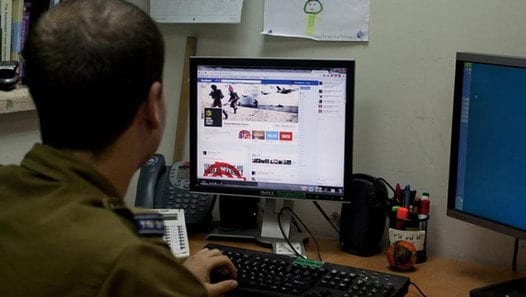 Aljazeera reports that last year “Israel was facing what came to be known as the “knife intifada” – hundreds of apparently uncoordinated attacks involving Palestinians stabbing Israelis. While 36 Israelis lost their lives, more than 200 Palestinians were killed, during that period, by Israeli security forces.” [See here]

The Israeli government then decided that “since some attackers went online to signal their intent or had been exposed to provocative posts there, the internet required policing for what the authorities called ‘incitement'”.

Hundreds of Palestinian activists, ordinary citizens, and journalists were then arrested and imprisoned “based on what they wrote or shared – particularly on Facebook.”

Last June, Facebook hired a new head of policy and communication for Israel: Jordana Cutler, formerly Chief of Staff at the Israeli Embassy in Washington DC and, before that, adviser to Prime Minister Benjamin Netanyahu.

The appointment came as top Israeli politicians publicly criticised the company and Israeli lawyers threatened it with a $1bn lawsuit. Cutler’s appointment was hailed by Minister of Public Security Gilad Erdan as “an advance in dialogue between the State of Israel and Facebook”.

Three months later Facebook representatives traveled to Tel Aviv to meet Israeli officials who, after the talks, said that the two sides would “work together” to tackle online incitement.

Al Jazeera reports that many Palestinians feel that Facebook is taking Israel’s side.

One states: “Facebook claims that it respects local laws; but when it backs Israeli accusations of incitement we are talking about an occupation state, so this accusation should not exist in the first place. We have reached a stage where there is high-level cooperation between Facebook on one side, and the Israeli occupation on the other and this is very dangerous.”

On top of this, Al Jazeera reports, Israeli politicians “are currently debating a so-called ‘Facebook Bill’ which – if passed into law – would give Israeli officials even more power to force Facebook to censor as the Israeli government sees fit. For Palestinians, the consequences are felt beyond their computer screens and smartphones, reaching into society itself.”