You Are Here: Home → The hollow ethics of Israel’s liberals

The hollow ethics of Israel’s liberals 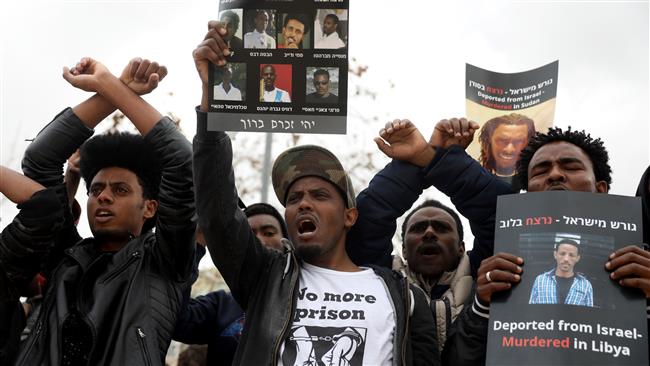 African asylum seekers, mostly from Eritrea, hold up placards showing migrants whom they say were killed after being deported from Israel during a protest in Jerusalem al-Quds, January 26, 2017. (Photo by AFP)

Liberal Israeli society is stepping up to advocate for African asylum seekers that their government is trying to deport. By standing up for asylum seekers in their plight while disregarding the Palestinians in theirs, these “allies” resemble the government they are protesting more than they’d like to admit.

Human rights abuses by their government have so outraged prominent liberal Israelis that, in an unprecedented move, they have launched a campaign of civil disobedience.

Many hundreds have responded to a call by rabbis, pledging to hide victims in their own homes to protect them from Israel’s security services.

With the mood rapidly turning sour, academics and professionals, including doctors, pilots, school principals and lawyers have refused to collude in Israel’s policy of oppression.

This month a raft of respected literary figures, including Amos Oz and David Grossman, reminded Prime Minister Benjamin Netanyahu that it was imperative to “act morally, humanely and with compassion worthy of the Jewish people. … Otherwise, we will have no reason to exist.”

Outside Israel, Jewish organisations have uncharacteristically sounded the alarm as well, warning that Israel’s actions “betray the core values that we, as Jews, share”.

But none of this outpouring of moral concern has been voiced on behalf of Palestinians. Instead the consciences of Israeli liberals have been pricked by the exceptional plight of some 40,000 African asylum seekers, mainly from Sudan and Eritrea.

The Israeli government initiated a programme this month to expel these refugees, who gained sanctuary in Israel from war zones before Israel managed to complete a fence across the Sinai in 2013 keeping them out.

The asylum seekers are now being offered a “choice” between being deported back to Africa, on the one hand, with the attendant dangers of persecution, torture and possible death, and indefinite imprisonment in Israel, on the other.

The destination country, Rwanda, is being paid $5,000 for each asylum seeker it accepts. But reports show that Rwanda is reneging on promises to give them residency status, forcing the refugees either to return to the regions from which they originally fled or make a perilous sea crossing to Europe.

Their treatment has indeed been shocking and is in flagrant violation of the international conventions on refugees’ rights Israel has ratified.

In an indication of how little official sympathy there is for the refugees, only 10 have been awarded asylum – a minuscule fraction of applicants. That compares with more than 80 per cent of Sudanese and Eritreans gaining refugee status in many European countries.

Meanwhile, Israeli government ministers have repeatedly incited against the Africans, calling them a “cancer” and a “sanitation hazard”, which in turn has fueled public hate campaigns and a lynch-mob mentality.

It is understandable why liberal Israelis would feel deep shame at this behaviour. The explicit rationale behind Israel’s creation, after all, was as a sanctuary for Jewish refugees from rampant race hatred and persecution in Europe that culminated in the Holocaust.

Israel often describes itself as a country of refugees. The conventions Israel is flouting were drafted precisely out of recognition of the plight of Jews fleeing Europe.

The backlash in Israel has been led by religious leaders. Rabbis have urged Israelis to shame the government by promising to hide the Africans in their cellars and attics to foil the deportations.

It is intended to echo the way Europeans once bravely tried to save Jews from the Nazis – most famously in the case of child diarist Anne Frank, who later perished in a concentration camp.

Pilots for Israel’s national carrier El Al and airport staff have publicly refused to fly the asylum seekers back into danger, joining in the public defiance of psychologists, lawyers, professors and many others.

A group of 350 doctors, including heads of hospital departments, this week said they were speaking out because the deportations would do “harm among the most severe known to humanity”.

And, in a move that was a public relations catastrophe for Netanyahu and his cabinet, Holocaust survivors and their organisations loudly denounced the policy this week too. They quoted Holocaust survivor Elie Wiesel’s address to the UN in 2005: “Will the world ever learn?”

The shock and indignation from liberal Israelis – while welcome and gratifying – has nonetheless exposed the ethical hollowness at the heart of this unprecedented campaign of civil resistance.

It looks suspiciously like liberal Israelis are prepared to stand in solidarity with asylum seekers only because it is a relatively easy generosity – an act of humanitarianism they dare not extend to Palestinians.

Many Palestinians are also refugees, spawned by Israel’s creation as a self-proclaimed Jewish state on their homeland and by the campaign of ethnic cleansing in 1948 that enabled it – what Palestinians term their Nakba, or Catastrophe.

Israel refused to allow these Palestinians to return home. Many millions have lived for decades in abject conditions in refugee camps across the Middle East.

Palestinians in the occupied territories, meanwhile, face appalling human rights abuses – in their case not via a third party in Africa, but directly from the state of Israel.

Where has been the solidarity, the campaigns of civil disobedience on behalf of these Palestinians after 70 years of suffering? Only a tiny number of far-left Israelis – mostly anarchists – have ever stood alongside Palestinians.

They have joined Palestinians, for example, on demonstrations in West Bank farming communities like Bilin and Nabi Saleh, facing down armed and often violent Israeli soldiers, as they struggle against the theft of their lands to feed the expansion of Jewish settlements.

In fact, far from showing solidarity with Palestinians, many liberal Israelis have been demanding ever harsher treatment.

The overwhelming majority of Israelis celebrated the recent imprisonment of Ahed Tamimi, the 16-year-old child from Nabi Saleh who slapped a soldier after he had invaded her home. Moments earlier his unit had shot her 15-year-old cousin in the face, after he peeked over a wall.

But Ahed and these other children are not Palestinian Anne Franks in the eyes of liberal Israelis. They are “terrorists”.

The wave of indignation at the asylum seekers’ predicament looks suspiciously like Israel’s “Trump moment”, echoing the recent outpouring of rage from American liberals at the easy hate-figure of US President Donald Trump.

These same Americans stood silent as Trump’s predecessors waged aggressive wars around the globe and tore up international law with programmes of extra-judcial executions, rendition and torture.

Similarly, liberal Israelis appear to be engaging in a kind of displacement activity: focusing on one grave but isolated outrage to avoid dealing with a far larger, far longer-running one they are personally implicated in.

Underscoring this paradox, Rabbis for Human Rights has called on the kibbutz and moshav agricultural communities to offer moral leadership in the campaign to hide African refugees.

These same communities were established over the destroyed homes of Palestinian refugees forced into exile in 1948. These same agricultural communities have barred any of the state’s Palestinian citizens – one in five of the population – from living in them. All have remained ethnically “pure”.

In their inconsistent moral defence of human rights, liberal Israelis have inadvertently revealed that they are not so far removed from the right-wing government they publicly abhor.

Much of the support for the African asylum seekers, including from Israel’s most famous writers, has highlighted how insignificant their numbers are, now that a wall across Sinai blocks further entry by refugees. If all 40,000 were allowed to stay, it is routinely pointed out, they would comprise less than 0.5 percent of Israel’s population.

Contrast that with Palestinians. A fifth of Israel’s citizens are Palestinian, those Israel failed to expel in 1948. Combined with Palestinians living under belligerent Israeli military rule in the occupied territories – in the Greater Israel Netanyahu is carving out – they comprise half the region’s population.

When it comes to Palestinians, liberal Israelis sound little different from Netanyahu’s supporters. Both are concerned about maintaining Israel as a fortress Jewish state. Both want walls to keep out non-Jews, whether Palestinians in the occupied territories or refugees from Africa.

Both characterise Palestinians, either Israeli citizens or victims of the occupation, as a “demographic demon” and the Jewish state’s “Achilles’ heel”. Both fear a dilution of Israel’s Jewishness.

In short, both Israeli liberals and right-wingers are obsessed with demography – the numbers of Jews versus non-Jews – and with preserving Jewish privilege. Both are laying the groundwork for future outrages against Palestinians and for further incremental waves of ethnic cleansing.

But educated, liberal European Israelis – those who dominate academia and the professions now leading the revolt – can afford to salve their consciences over a population of Africans who will remain small and marginal. These refugees are unlikely to rise above sweeping the streets or cleaning dishes in restaurants in liberal Tel Aviv.

Netanyahu and the right, however, rely on the support of much poorer Israelis, often Jews who immigrated from Arab countries and face overt discrimination from Israeli liberals.

Rightwing politicians need constantly to create (non-Jewish) bogeymen to shore up their political power base among these poor communities. It has been easy for the right to whip up fears of African refugees as freeloaders and here to “steal our jobs and women”.

In a fearmongering tactic reminiscent of those used against Palestinians, Netanyahu warned in 2012 that 60,000 Africans – the number then in Israel – “could become 600,000 and possibly even jeopardise Israel’s continued existence as a Jewish democracy”.

Netanyahu’s government routinely describes the African refugees as “illegal infiltrators” – a much more sinister term than may be apparent to outsiders.

“Infiltrators” are what the Palestinians were called when they tried to return to their homes after their expulsion in 1948. An early Israeli law effectively gave Israeli security officials carte blanche to shoot these “infiltrators”.

The government’s comparing of African refugees to these Palestinians is intended as a clear form of incitement.

That may not wash with liberal Israelis, but also it has not opened their eyes to their own hypocrisy. Theirs is a pragmatic humanitarianism, not a principled one.

Is the terrible suffering Israel is now inflicting on African refugees not also the moment for liberal Israelis to appreciate that Palestinians have been enduring similar abuses for seven decades?

Has the time not finally arrived when liberal Israelis need to mount a campaign of civil disobedience on behalf not just of Africans but of Palestinians too?