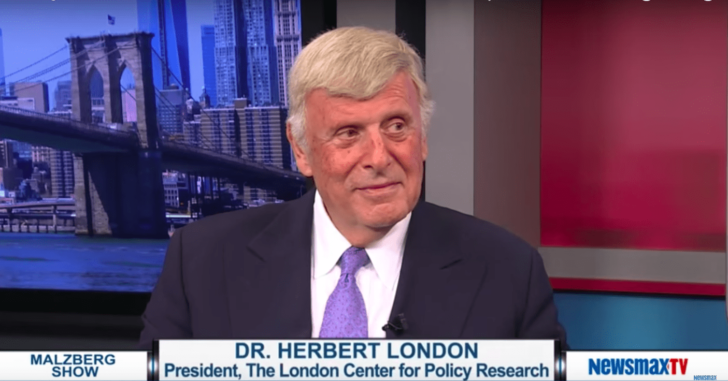 Herbert London, who has been “behind Israel his entire life,” warns of alleged Iran threat. (Still from video.)

Herbert London, head of the pro-Israel London Center for Policy Research, says his organization helped influence the US Congress to pass the anti-Palestinian Taylor Force Act.

In an interview with Israeli news site Arutz Sheva, London said his organization “served as a guide to key congressman who played important roles in getting the bill passed such as Congressman Keith Rothfus from Pennsylvania.”

Arutz Sheva reports that London has been “behind Israel his entire life.” London, who “has been passionate about the Jewish state from its conception,” advised Presidents Ronald Reagan and George W. Bush.

London founded the Gallatin School of Individualized Studies at New York University and then “devoted his scholarly work to the world of conservative politics.”

London was the president of the Hudson Institute from 1997 to 2011 and is now President Emeritus and a member of the management committee.

(The new Hudson president is Kenneth R. Weinstein, who is also on the board of Forum for Jewish Leadership. In the 1990s, Weinstein was the director of research for the New Citizenship Project, which helped launch the pro-Israel Project for the New American Century (PNAC). PNAC was behind the U.S. invasion of Iraq. Hudson’s Board Chairman is Allan R. Tessler.)