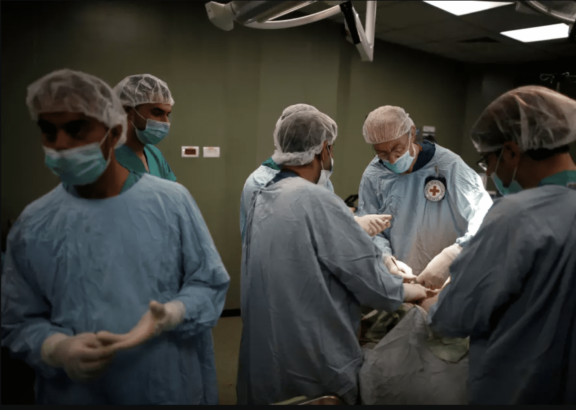 A surgeon, invited to Gaza by the Red Cross (ICRC), performs surgery for a wounded Palestinian in a hospital in Gaza City April 25, 2018. (photo credit: REUTERS/SUHAIB SALEM)

Medical work in Gaza is impeded by the unmanageable number of wounded, the complex injuries that will require multiple follow-up procedures, and the shortage of supplies. Add to that the difficulty in getting permission for patients to seek medical attention outside the country – it adds up to an impossible situation.

by Jonathan Owen, The BMJ (originally the British Medical Journal)

More than a thousand people in Gaza have been left with life changing injuries after being shot by Israeli soldiers at demonstrations in the past few months, doctors have said, leading to a medical emergency.

Nearly 10 000 people have received injuries requiring hospital treatment, many of them caused by shots from Israeli forces, since the Great March of Return protests began at the border with Israel at the end of March.

The conflict in numbers

Local and British surgeons have told The BMJ how they have had to improvise to save limbs. They are seeing new types of injuries that will require many years of reconstructive surgery and rehabilitation.

The bloodiest single day was 14 May, when the sheer scale of casualties overwhelmed Gaza’s hospitals. More than 1366 people were shot and wounded and 63 were killed, including eight children.

Tom Potokar, a consultant plastic surgeon at the Welsh Centre for Burns and Plastic Surgery who helped treat gunshot wounds in Al-Shifa Hospital in Gaza, described patients who had “lower limb injuries with shattered bone, ripped and shredded soft tissues, cold and pulseless indicating damage to the major blood supply.”

Graeme Groom, a consultant orthopaedic surgeon at King’s College Hospital, who was also treating patients at the hospital, said, “Most of the legs had some residual blood supply. The vascular surgeons were very resourceful, the technique is either to repair the vessel or to bypass it. The way of bypassing it permanently is usually with a vein graft, but that takes time.

“The quick fix is with a shunt, which is essentially a plastic tube, but there were no shunts to deal with all these people so other tubes were pressed into service. I saw a femoral artery bypassed with a nasogastric tube, a lot of clever innovative stuff, and then a few days later when things were a bit more peaceful it was replaced with a vein graft, and the leg survived.”

Medical teams from Médecins Sans Frontières have reported treating hundreds of people with gunshot wounds where the bullet has destroyed tissue and pulverised the bone, leaving exit wounds the size of a fist. Amnesty International claims that “many of the wounds observed by doctors in Gaza are consistent with those caused by high velocity Israeli manufactured Tavor rifles using 5.56 mm military ammunition. Other wounds bear the hallmarks of US manufactured M24 Remington sniper rifles shooting 7.62 mm hunting ammunition, which expand and mushroom inside the body.”

Fadel Naim, consultant orthopaedic surgeon at Al-Ahli Arab Hospital in Gaza, said that a lack of surgeons experienced in complex injuries and a shortage of medical supplies meant that “many of these patients have to be referred abroad for management, which is very difficult as a result of siege and blockade on Gaza.”

Referrals out of Gaza

Andy Ferguson, Medical Aid for Palestinians’ director of programmes who was present at Gaza’s largest hospital, Al-Shifa, on 14 May, recalled how the emergency department “was complete chaos.” He said that they ran out of decent analgesia half way through the day, so the best they could offer people with gunshot injuries was diclofenac orally or paracetamol while they were waiting.

Gaza’s hospitals were already in crisis. The influx of patients has exacerbated existing “challenges to the capacity of the health sector in Gaza” according to WHO’s latest health cluster report. (1) Gaza’s Ministry of Health has already exhausted its stocks of 40% of essential medicines, with less than one month’s supply left of a further 48% of its essential medicines list. More than 7000 elective operations have been postponed; the waiting time for planned procedures is now 64 weeks.

And the crisis will deepen in the coming weeks, as WHO warns that UN donated fuel for hospitals will run out by the end of August. (2)

The UK Department for International Development said that it was deeply concerned about the deteriorating humanitarian situation in Gaza. A spokesperson for the department said: “UK aid is helping to provide surgical equipment, medicine, and physical rehabilitation services for around 4000 disabled Gazans. This includes supporting those who now have disabilities following the recent surge in violence, as well as the Artificial Limb Centre in Gaza.”

Stephen Twigg, chair of the House of Commons International Development Committee, said: “The future looks bleaker than ever. The trauma victims from the recent, and not so recent, violence have longer term remedial needs—rehabilitation, prosthesis, and social care provision—and this may finally break the system.”

In a statement, the Israeli Medical Association expressed its concern about “the health of all people, regardless of race, ethnic origin, and nationality.”

It added: “At the time of the Gazan protests, we were in touch with the Israeli authorities and ensured that medical supplies were continued and that wounded Gazans who required treatment outside Gaza were allowed to transfer to Israel and to the West Bank. We also contacted the ICRC [International Committee of the Red Cross] to monitor the situation. We will continue to do our part to ensure healthcare even in times of conflict.”

Neither the Israel Defense Forces nor the Israeli government responded to requests from The BMJ for comment.