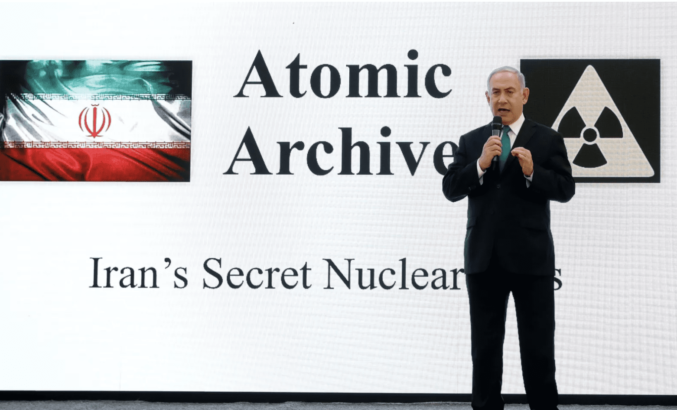 Netanyahu’s dog-and-pony show Monday disregarded the pronouncement by the IDF’s Chief of Staff Gadi Eisenkot that the Iran deal is working and will keep nukes out of Iranian hands for at least ten years.

It also lacked proof. But it did give President Trump (and Bibi’s own drooping voter base) some memorable images and catch-phrases.

And the information he presented with such urgency is old and already familiar to anyone who has read IAEA reports.

1 Prime Minister Benjamin Netanyahu began his press conference in Tel Aviv on Monday evening at a distinct disadvantage. In his desire to discredit the Iran nuclear deal – from which President Donald Trump is expected to withdraw on May 12 – he had to clear a bar set by Israel’s security establishment over the last three years: That despite all he has said, the deal is not such a bad thing and actually serves to curb Iran’s nuclear ambitions for the time being.

Only five weeks ago, Israel Defense Forces Chief of Staff Lt. Gen. Gadi Eisenkot told Haaretz that “right now, the agreement, with all its faults, is working and is putting off realization of the Iranian nuclear vision by 10 to 15 years.”

Instead of dealing with the discrepancy between his stated views on the Iran deal and what most of the chiefs of the security establishment have been saying (in private and occasionally in public), Netanyahu put on a great show. This included the kind of props and visual aids that have become the hallmarks of his rhetoric since his days as Israel’s ambassador to the United Nations three decades ago.

He missed only one thing: Crucial dates that could prove Iran has actually done anything in contravention of the Joint Comprehensive Plan of Action (JCPOA) since it was signed in 2015.

Extrapolating from the fact that Iran has continued to maintain and hide this nuclear archive, and that the same people mentioned in the files are still around, doesn’t necessarily mean there’s a “shadow” weapons program still going on. Of course, there very likely is, but Netanyahu offered no proof of that. What he had wasn’t a smoking gun but a photograph of a smoking gun taken years ago.

That flaw was so glaring as to render an incredible intelligence coup – obtaining Iran’s nuclear archive – almost irrelevant and obsolete to Netanyahu’s current purpose.

2 The information Netanyahu revealed Monday will not have been new to the leaders of the United States, Great Britain, France, Germany and Russia, who are signatories to the JCPOA. Netanyahu’s plenipotentiaries – the heads of Mossad and the National Security Council, and the Foreign Ministry’s director general – have all been shuttling between the capitals in recent days, briefing their counterparts. And Defense Minister Avigdor Lieberman just got back from meetings at the Pentagon. But none of it seems to have convinced those who are in favor of sticking to the JCPOA or even those sitting on the fence.

Last Thursday, U.S. Defense Secretary James Mattis said that after reading the JCPOA three times, “I will say that it is written almost with an assumption that Iran would try to cheat.”

It sounded like he was already responding to the Netanyahu dossier: Yes, Iran lied, which is why a robust deal that assumes it will continue to lie is necessary.

Netanyahu knows as much. He’s received all the reports from his emissaries. But he still went ahead with his overblown and overhyped press conference because he knows that the man about to make the decision on the Iran deal will never in a million years be capable of explaining it.

The prime minister is now both Trump’s coach and cheerleader, trying to prepare him with handy quotes and easy-to-remember talking points – and already setting the mood music to try and cover up for the president’s inevitable fumbles.

3 There was some substance to the press conference, not just smoke and mirrors. We didn’t learn anything new about the Iranian nuclear program we didn’t already know or that hadn’t already been verified by International Atomic Energy Agency reports. But it was still fascinating to see the details highlighted in what Netanyahu claims are the files from Iran’s secret archives – assuming, of course, they are authentic (and there’s no reason to think Netanyahu would discredit Israel’s intelligence community by presenting blatantly false evidence).

But while he is not discrediting the Mossad, Military Intelligence and whatever other agencies may have been involved in obtaining the Iranian nuclear archive, he has diminished their considerable achievement.

This prime-time exposition, mainly in English but timed for Israeli television’s main news shows, was also a blatant play to domestic public opinion. It occurred the week after polls showed the start of a gradual erosion in Netanyahu and his Likud party’s support among the electorate. This cynical manipulation of an intelligence coup to help Trump make his case on May 12, and to boost Netanyahu’s flagging ratings at home, will not have been to the liking of many of Israel’s intelligence professionals.

Sooner or later they will let their displeasure be known, and it may come back to rebound on Netanyahu.