You Are Here: Home → Is Iran really a nuclear threat? 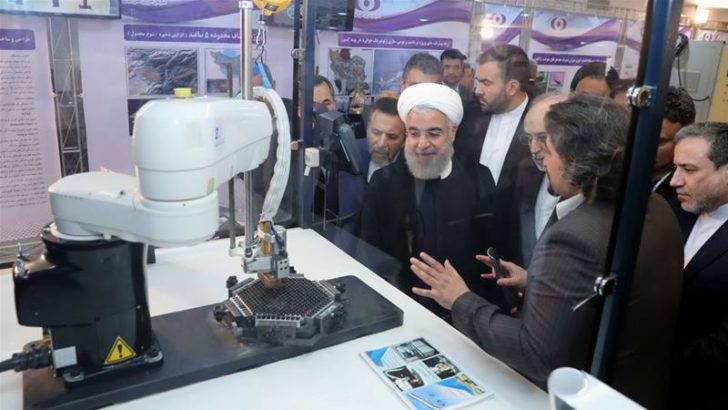 Investigative journalist Gareth Porter dispels some of the myths surrounding Iran’s nuclear programme: Netanyahu and others have been crying wolf about Iran and nukes since the 1980s (including likely forging documents), while the IAEA has been declaring Tehran’s compliance; the Ayatollah has maintained that WMDs are “unIslamic,” and hasn’t used them yet (even against Iraq’s WMDs); Iran needs ballistic missiles as a deterrent since it has no air force; and it has never threatened aggression toward Israel.

“Iran is moving ‘very quickly’ towards production of a nuclear bomb and could have a weapon within two years,” the United Press International reported.

The quote was published in a 1984 article headlined “‘Ayatollah’ bomb in production for Iran” but it might as well have been published today.

For more than three decades Western politicians and the press have been claiming that Iran is a nuclear threat.

Israeli leaders Benjamin Netanyahu and Shimon Peres echoed this claim numerous times in the 1990s, warning that Iran would build an atomic bomb by the next decade.

In the fall of 2012, Netanyahu declared at the United Nations General Assembly meeting – with his infamous bomb cartoon – that Iran would be able to build a nuclear weapon by June 2013.

The following October, former US President Barack Obama followed with a new deadline – that Iran is a year away from making a nuclear bomb.

Most recently, the press reported earlier this month that Yossi Cohen, head of Israel’s Mossad intelligence agency, stated he is “100 percent certain” that Iran is seeking to build a nuclear weapon.

And yet, the International Atomic Energy Agency (IAEA) has released eight statements over the years confirming that Tehran has been meeting its nuclear commitments fully.

In July 2015, a landmark nuclear deal known as the Joint Comprehensive Plan of Action (JCPOA) was reached between Iran and the P5+1 countries: China, France, Russia, the UK, the US plus Germany, in which Iran agreed to reduce its enrichment of uranium, curbing its nuclear programme and ending decades of sanctions on the country.

While Iran has proved to be following its commitments, US President Donald Trump has found a new threat – Iran’s ballistic missile programme – and has threatened to scrap the nuclear agreement, which he has called the “worst deal ever”.

So how much of a nuclear threat is Iran?

Al Jazeera spoke with Gareth Porter, a historian, investigative journalist and author of Manufactured Crisis: The Untold Story of the Iran Nuclear Scare, with more than a decade of research into the topic, to learn more.

Al Jazeera: We heard yet another claim earlier this month, this time from the chief of Mossad, that Iran is planning to build a nuclear bomb. You’ve uncovered a wealth of evidence that proves Iran is not a threat. What are some of the most important pieces of evidence?

Gareth Porter: I think the most important set of documentary evidence is the so-called “laptop” documents. Those were documents that were supposedly [smuggled out] from a covert Iranian nuclear weapons research programme in the early 2000s, but I was able to show in my book that these documents were in fact passed on to Western intelligence by the Mujahedeen-e-Khalq (MEK), who of course were sworn enemies of the regime.

They were considered a terrorist organisation for many years, and most importantly the MEK was working hand in glove with Israel’s Mossad during the period when these documents surfaced.

The Israelis had both the motive and the opportunity to manufacture these documents that Mossad had created, a special programme to circulate “information” about the Iranian nuclear programme to other governments and the news media of the world in 2003. That was just when these documents would have been produced.

There are multiple indications that these documents are forgeries – the most important of which are the drawings of what is alleged to be in the documents, a series of efforts to make a nuclear weapon with the Iranian Shahab 3 missile.

These drawings actually show the wrong missile warhead. It’s a missile warhead that the Iranians are known now to have abandoned by the time these drawings were supposedly brought into existence. It is the most important giveaway that these documents were not genuine; they were fake.

Al Jazeera: You have previously said that to understand Iranian policy towards nuclear weapons, one should refer to the historical episode of its war with Iraq from 1980-1988. What can you tell us about that?

Porter: If you go back to the Iran-Iraq war, what was happening for eight years was that Iraq’s armed forces were hitting both military and civilian targets in Iran with chemical weapons, which caused as many as – if I remember the figure – 110,000 serious injuries and tens of thousands of deaths to Iranians because of the chemicals dropped on them by the Iraqis.

The IRGC (Iranian Revolutionary Guard Corps) – in charge of Iran’s defences against the Iraqi attack – wanted Ayatollah Khomeini to agree to go ahead with not just chemical and biological weapons but nuclear weapons, to have programmes to prepare the capability at least to retaliate, in order to try to deter at the very least the attacks of weapons of mass destruction by Iraq.

There were those early in the war and late in the war… who hoped that Khomeini would change his mind; and the reason that he gave in both cases is quite simple – he said Iran cannot possess or use any weapons of mass destruction because it is illegal, illicit under Islam.

He was the person in charge of the interpretation of what Islam meant for policies and laws of the Islamic Republic of Iran. This is an extremely important and supremely convincing argument for the seriousness of the Iranian refusal to have a nuclear weapons programme… There’s no real evidence to the contrary that suggests that Iran ever had a real nuclear weapons research programme.

Al Jazeera: We’ve seen over the years that Iran has acted cooperatively regarding its nuclear programme. However, in the end, there’s always a new accusation that comes up.

Porter: It’s absolutely clear that Iran has simply used ballistic missiles as a deterrent far more than any other state in the Middle East because they do not have an air force. They do not have fighter jets or fighter-bombers that could deliver any conventional weapons as a retaliation for an attack on Iran. And that has been the case since the Islamic Republic of Iran was established in 1979.

The other major players in the Middle East, including Israel and Saudi Arabia, both have ballistic missiles that are capable of hitting Iran. This is very clearly a matter of self-defence in terms of deterrence for Iran. And I think the reason for the United States taking a position that it has, has nothing to do with the reality of the situation; this is pure politics – both international and domestic that have governed the position of US government – not just under Trump but under George W Bush and Obama as well.

Al Jazeera: Some say Iran is a threat because its leaders have allegedly stated their aim is to destroy Israel. How credible are these claims?

This interview has been edited for length.