You Are Here: Home → Good News/Bad News on Water Supplies in Gaza 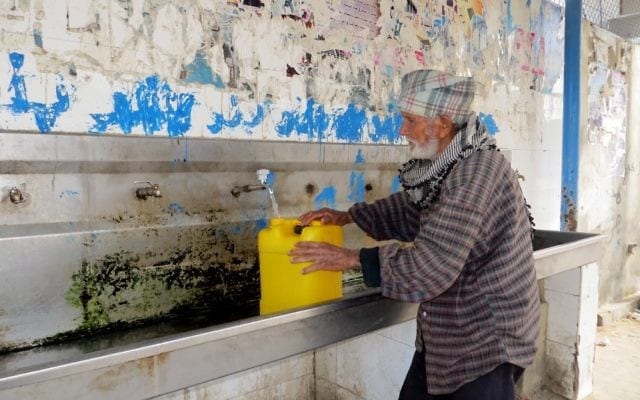 Gaza desperately needs power to run desalination plants for fresh water production. The EU has donated a huge new solar energy field to do the job, but Israeli restrictions are keeping it from being used. 97% of Gaza’s water is contaminated.

The European Union yesterday announced the completion of the largest solar energy field in the Gaza Strip that will provide 0.5 megawatts of electricity per day to fuel a desalination plant.

The European Commission said in a statement that the desalination plant currently provides drinking water to 75,000 people in the provinces of Khan Yunis and Rafah, south of Gaza Strip, adding that with the completion of the new solar project, water will reach 250,000 people in Gaza by 2020.

EU Commissioner for European Neighbourhood Policy and Enlargement Negotiations, Johannes Hahn, said: “Limited energy supplies in Gaza are one of the main challenges when improving access to safe and drinkable water to the local population.”

“The photovoltaic solar field is essential to respond to the urgent water needs in Gaza and create dignified living conditions for its people, thus mitigating tensions in a highly conflict sensitive area,” he added.

He pointed out that 97 per cent of the water in Gaza is unfit for human consumption, warning of the high population density in the sector, which puts enormous pressure on infrastructure damaged by repeated conflicts.

Israel’s ban on Gaza goods has preventing the opening of the largest solar field in the Strip, which otherwise could have become operational this week, sources told The Jerusalem Post.

Projects like the EU funded solar field are designed to help provide electricity for the plant, but this new field is lacking the cables and other parts necessary to be hooked up to the electricity grid.

Last month Israel banned all commercial goods from entering and leaving Gaza to protest “Hamas violence” against Israel. This includes building materials for infrastructure projects such as the solar field.