You Are Here: Home → Giraldi: Why Do “Progressives” Like War? 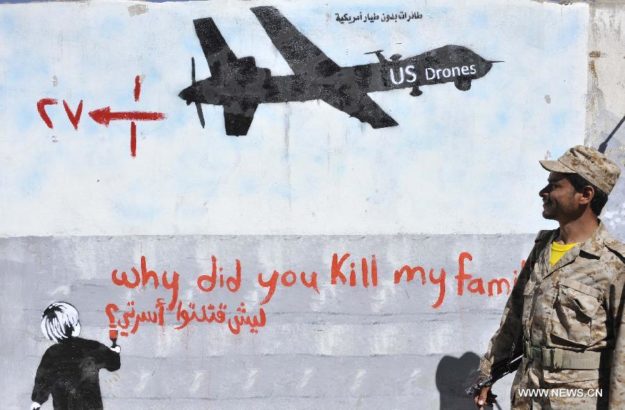 Philip Giraldi writes that while many people think of liberal and conservatives as being anti-war, recently many have been promoting war agendas:

We have seen the Obama [administration] meddling in Libya, Yemen and Syria in so called humanitarian interventions which have turned out to be largely fraudulent. Yes, under the Obama Dems it was “responsibility to protect time” (r2p) and all the world trembled as the drones were let loose.

Last Friday I started to read an op-ed in The Washington Post by David Ignatius that blew me away. It began “President Trump confronts complicated problems as the investigation widens into Russia’s attack on our political system.” It then proceeded to lay out the case for an “aggressive Russia” in the terms that have been repeated ad nauseam in the mainstream media. And it was, of course, lacking in any evidence, as if the opinions of coopted journalists and the highly politicized senior officials in the intelligence community should be regarded as sacrosanct. These are, not coincidentally, the same people who have reportedly recently been working together to undercut the White House by leaking and then reporting highly sensitive transcripts of phone calls with Russian officials.

Ignatius is well plugged into the national security community and inclined to be hawkish but he is also a typical Post politically correct progressive on most issues. So here was your typical liberal asserting something in a dangerous fashion that has not been demonstrated and might be completely untrue. Russia is attacking “our political system!” And The Post is not alone in accepting that Russia is trying to subvert and ultimately overthrow our republic. Reporting from The New York Times and on television news makes the same assumption whenever they discuss Russia, leading to what some critics have described as mounting American ‘hysteria’ relating to anything coming out of Moscow.

Rachel Maddow is another favorite of mine when it comes to talking real humanitarian feel good stuff out one side of her mouth while beating the drum for war from the other side. In a bravura performance on January 26th she roundly chastised Russia and its president Vladimir Putin. Rachel, who freaked out completely when Donald Trump was elected, is now keen to demonstrate that Trump has been corrupted by Russia and is now controlled out of the Kremlin. She described Trump’s lord and master Putin as an “intense little man” who murders his opponents before going into the whole “Trump stole the election with the aid of Moscow” saga, supporting sanctions on Russia and multiple investigations to get to the bottom of “Putin’s attacks on our democracy.” Per Maddow, Russia is the heart of darkness and, by way of Trump, has succeeded in exercising control over key elements in the new administration.

Unfortunately, people in the media like Ignatius and Maddow are not alone. Their willingness to sell a specific political line that carries with it a risk of nuclear war as fact, even when they know it is not, has been part of the fear-mongering engaged in by Democratic Party loyalists and many others on the left. Their intention is to “get Trump” whatever it takes, which opens the door to some truly dangerous maneuvering that could have awful consequences if the drumbeat and military buildup against Russia continues, leading Putin to decide that his country is being threatened and backed into a corner. Moscow has indicated that it would not hesitate use nuclear weapons if it is being confronted militarily and facing defeat.

The current wave of Russophobia is much more dangerous than the random depiction of foreigners in negative terms that has long bedeviled a certain type of American know-nothing politics. Apart from the progressive antipathy towards Putin personally, there is a virulent strain of anti-Russian sentiment among some self-styled conservatives in congress, best exemplified by Senators John McCain and Lindsey Graham. Graham has recently said “2017 is going to be a year of kicking Russia in the ass in Congress.”

It is my belief that many in the National Security State have convinced themselves that Russia is indeed a major threat against the United States and not because it is a nuclear armed power that can strike the U.S. That appreciation, should, if anything constitute a good reason to work hard to maintain cordial relations rather than not, but it is seemingly ignored by everyone but Donald Trump.

No, the new brand of Russophobia derives from the belief that Moscow is “interfering” in places like Syria and Ukraine. Plus, it is a friend of Iran. That perception derives from the consensus view among liberals and conservatives alike that the U.S. sphere of influence encompasses the entire globe as well as the particularly progressive conceit that Washington should serve to “protect” anyone threatened at any time by anyone else, which provides a convenient pretext for military interventions that are euphemistically described as “peace missions.”

There might be a certain cynicism in many who hate Russia as having a powerful enemy also keeps the cash flowing from the treasuring into the pockets of the beneficiaries of the military industrial congressional complex, but my real fear is that, having been brainwashed for the past ten years, many government officials are actually sincere in their loathing of Moscow and all its works. Recent opinion polls suggest that that kind of thinking is popular among Americans, but it actually makes no sense. Though involvement by Moscow in the Middle East and Eastern Europe is undeniable, calling it a threat against U.S. vital interests is more than a bit of a stretch as Russia’s actual ability to make trouble is limited. It has exactly one overseas military facility, in Syria, while the U.S. has more than 800, and its economy and military budget are tiny compared to that of the United States. In fact, it is Washington that is most guilty of intervening globally and destabilizing entire regions, not Moscow, and when Donald Trump said in an interview that when it came to killing the U.S. was not so innocent it was a gross understatement.

Ironically, pursuing a reset with Russia is one of the things that Trump actually gets right but the new left won’t give him a break because they reflexively hate him for not embracing the usual progressive bromides that they believe are supposed to go with being antiwar. Other Moscow trashing comes from the John McCain camp which demonizes Russia because warmongers always need an enemy and McCain has never found a war he couldn’t support. It would be a tragedy for the United States if both the left and enough of the right were to join forces to limit Trump’s options on dealing with Moscow, thereby enabling an escalating conflict that could have tragic consequences for all parties.

Exclusive: Democrats, liberals and media pundits – in their rush to take down President Trump – are pushing a New McCarthyism aimed at Americans who have talked to Russians, risking a new witch hunt, reports Robert Parry…

Democrats and liberals are so angry about President Trump that they are turning to McCarthyistic tactics without regard to basic fairness or the need to avoid a costly and dangerous New Cold War, notes Daniel Lazare…