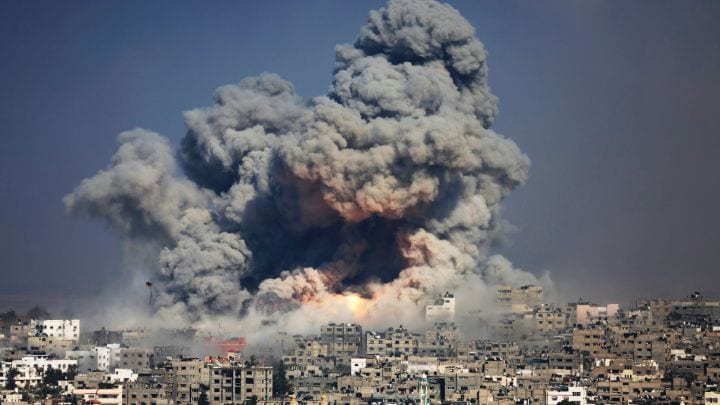 Israel loves wars. Needs them. Does nothing to prevent them, and sometimes instigates them. There is no other way to read the state comptroller’s report on the 2014 Gaza war, and there is no more important conclusion that arises from it.

All the rest – the tunnels, the National Security Council, the cabinet and the intelligence – are trifles, nothing more than efforts to distract us from the main thing. The main thing is that Israel wants war. It rejected all the alternative, without discussing them, without interest in them, to fulfill its desire.

Israel wanted wars in the past as well. Since the 1948 war, all its wars could have been avoided. They were clearly wars of choice, although most of them were of no use and a few of them caused irreparable damage. Israel usually initiated them, sometimes wars were forced on it, but even then, they could have been avoided, like in 1973. Some of the wars ended the careers of those who started them, and yet, time after time Israel chooses war as the first and preferred option. It is doubtful that a rational explanation can be found for the phenomenon, but the fact is, every time Israel goes to war it receives sweeping, automatic and blind support in public opinion and the media. Thus not only the government and the army love war, all of Israel loves war.

This is proven by the fact that committees of investigation publish almost identical reports after every war – the report on the Gaza war is almost plagiarized from the Winograd Commission report after the 2006 Second Lebanon War. (“The war was embarked on hastily and irresponsibly.”) When nothing is learned and everything is forgotten, it’s clear that something strong is pulling Israel to war.

That’s also the way it was in the summer of Operation Protective Edge, when there was no reason at all for war. And that’s the way it will be in the next war, which looms ahead. What a pity that the “red alert” in the south on Tuesday was a false alarm. It was almost the opportunity to strike a disproportionate blow on Gaza, the way Defense Minister Avigdor Lieberman and Israel love, the kind that drags Israel down to the next war.

Prime Minister Benjamin Netanyahu (C), Defense Minister Moshe Ya’alon (R) and then-IDF chief Benny Gantz during Operation Protective Edge ,July 30, 2014. Kobi Gideon / GPO
Its writing is already on the wall, its enthusiasts miss no opportunity to instigate it and its history is like the history of the wars covered by the state comptroller’s reports. The next war will also have a report. You and me and the next war, and the next report.

It’s reasonable to assume that the next war will break out in Gaza. The alibi is already prepared. The horror over the tunnels, which has been blown into the grotesque proportions of a nuclear world war, was created for this purpose. Primitive combat tools are enough to create the perfect alibi for war. And like before Operation Protective Edge, no one stops to ask: What about Gaza, which in another three years won’t be fit for human habitation? How do we expect it to respond in light of the existential danger to its inhabitants? What’s the hurry? There’s time. Meanwhile it can be destroyed another time or two.

Gaza pampers Israel with deluxe wars. There’s nothing Israelis love more than a war against a non-army, against those who have no aerial cover, no armor and no artillery, just an army of the barefoot and tunnels, which allows Israel stories of great heroism and bereavement. Israeli bombardments of the helpless, for some reason called war, with minimal Israeli casualties and maximal Palestinian casualties – that’s the way we like our wars.

The state comptroller has determined that the cabinet did not discuss alternatives to war. That should have been a cry that reverberated from one end of the country to the other, yet it was swallowed up in the nonsense of the tunnels. Any child in Gaza knows that there is such an alternative, that if Gaza opens to the world, it will be different. But for that, courageous Israeli leaders are needed, and of those there are none. Masses of Israelis are needed to say an unequivocal “no” to wars – and there are none of those, either. Why? Because Israel loves wars.