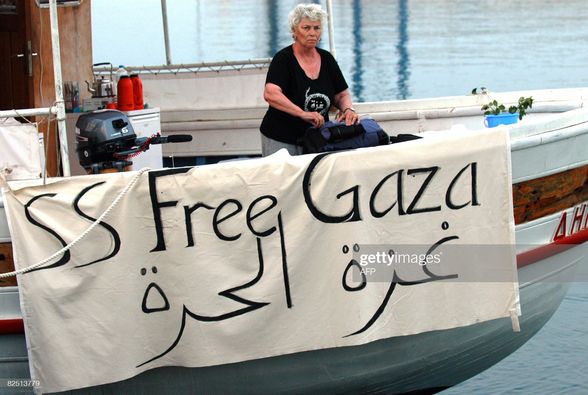 Three articles and two videos below honor Mary Hughes Thompson, who recently passed away. Mary was devoted to human rights, justice, and peace

In Honor Of My Friend

Mary Hughes Thompson, 87, died on February 5, 2021, in Los Angeles, California. She is survived by her son, Andy Hughes, 65, and a granddaughter, Selena Hughes, 20, from Guelph, Canada. When we asked her who she wanted donations to go to, she asked us to let everyone know they should go to Middle East Children’s Alliance (MECA). They have now set up a page to collect funds to build a playground in her honor in Gaza. Please donate and share. https://secure.everyaction.com/CrA31jojiEmJVM6MQppEqg2

I also want to talk about her life, at least the life I knew from being her friend, her sister, and her comrade for 19 years. She was a woman of determination, courage, and joy. Her life spanned eight decades and three countries. In the last decades of her life, she was an outspoken advocate for justice in Palestine, Iraq, and the U.S. I met her in 2003 when she was 69 years old, back from a trip to the occupied West Bank, and I was getting ready to leave for Palestine.

She was born in 1933 in Manchester, England, and used to tell us stories about what it was like growing up under the bombs of Hitler, how she learned to knit socks and scarves and caps for the British soldiers. She was only 7 when she learned to knit and she used that talent her entire life, becoming a master knitter, designing patterns, and teaching knitting classes in Los Angeles. That was just one of her many talents, though.

At 16, she had to leave school, because everyone did in those days after the war had ravaged Britain. She was the only girl in a family of 9 children when she was growing up (her sister came along 12 years later, too late to help), and she was in charge of taking care of the house, her brothers, and working as well. Her mother used to tell her she was ‘clever’, but Mary was much more than clever. She was smart, funny, and could write rings around most people.

When she moved to California in 1963, she’d been married and had a son, Andy. Mary got a job in the film biz, starting as a secretary, working her way up through the ranks, and by the time she was in her 50s, she was a documentary researcher for David Wolper. a writer for “All in the Family” and a member of the Writer’s Guild.
One day she decided she’d like to learn how to fly. She did, got her pilot’s license, and bought a small Cessna. She once told me her mom had come to visit her from the UK, and she piled her mom into the plane and flew her to Palm Springs for lunch, just because she could. She flew for years until, in her 50s, she decided that was enough and sold the plane.

When I met her, she was already retired and doing human rights work. She’d been to occupied Palestine with Christian Peacekeepers Team (CPT) and the International Solidarity Movement (ISM) twice. At 68, while picking olives in Yanoun, she was attacked by armed settlers, who beat her and took all of her possessions. https://www.wrmea.org/…/american-woman-beaten-robbed-by… She had no broken bones, but her arms, back, and chest were badly bruised, bleeding, and swollen. The settlers had stolen her two passports, air tickets, credit cards, digital camera, and approximately $1,000 in cash. Yet, she was determined to return, and she would, several times.

When Bush invaded Iraq, she joined the CPT human rights delegation in 2003 and became a witness there before the carnage began, hoping the US would have second thoughts if they knew how many Americans had gone to Iraq in support of peace instead of war. They left just before the war broke out.

I had contacted her because I was leaving for occupied Palestine in July of 2003, and she was an invaluable source of information. We realized we lived only a mile apart from each other, and we became fast friends for the rest of her life.

In 2005, we went to Palestine for the Women in Black conference, fooling the Shin Bet interrogators who kept us at the Ben Gurion airport for 8 hours. We had carefully crafted a story about who we were and how we’d get in, saying I was bringing my crippled cousin to the Holy Land so she could walk where Jesus walked one last time. She was in a wheelchair, had borrowed a bottle of heart medication (and put aspirin in it), and had a cane as well. As they kept taking me off into one small room after another, they left Mary in the baggage area, and she got weaker and weaker and smaller and smaller. Mary had done such a good acting job that when they finally let us in, I believed she was ill. We took a cab to Jerusalem, all the time I was asking if she was OK. When it pulled up in front of Damascus Gate, she leaped out of the cab, grabbed her roller bag, and took off down the street. It had all been an act, fooling even me. That’s the Mary I’ll remember.

We returned to occupied Palestine one more time in 2007, traveling through Jordan this time with Holocaust survivor, Hedy Epstein, and journalist, Alison Weir. The adventures we had, the joy we felt getting back in, entering from the Sheik Hussein crossing where most pilgrims entered the Galilee. We were sure we’d be stopped, but the famed Israeli tracking system apparently didn’t reach as far as this crossing. When Mary and I walked through passport control (by then we had new passports), they asked us why we were coming. “I just want to walk the steps of Jesus one more time.” She replied. Well, it worked the first time. It worked this time as well. When they began questioning her, she kept nodding her head and saying “what?” “She can’t hear,” I said. ‘What’d you need to know?” They waved us through. We attended Issa Amro’s wedding, worked in Hebron, went to Bi’lin, documented what we witnessed, wrote PR releases and articles.

She and I were already working on a new project, had been since 2006, sailing boats to Gaza. She was the co-founder of that initiative, and we actually made it to Gaza in 2008. https://www.freegaza.org/How-We-Made-It-In-Spite-Of…/ After that August, she worked on the land crew in Cyprus three more times, sending boats back to Gaza, two of them landed successfully.

In 2010, Mary was supposed to be one of the passengers on board the ill-fated Freedom Flotilla I when the ships were attacked and ten of our passengers murdered by Israeli commandoes who attacked all six ships in the flotilla. When she couldn’t get on board one of the boats, she came back to the Free Gaza office in Cyprus and worked tirelessly for over three weeks, handling media questions from the UK, Australia, and New Zealand.

In 2011, she was a passenger onboard the Canadian boat to Gaza, also stopped when Israel outsourced the occupation to Greece and demanded the Greek coast guard stop all of our boats leaving from there.

For the past ten years, Mary has written, spoken, and advocated for justice in Palestine. Since we could no longer get into Gaza, she became one of several of us boat passengers on board that first successful trip to go out and speak to audiences about what we’d done and what we’d witnessed. When the book about our trip, Freedom Sailors, https://www.amazon.com/…/ref=cm_cr_arp_d_product_top… was released, she toured the West Coast with me, speaking to audiences about that first successful trip.

One of her last messages to those of us who have worked, loved, and laughed with her was typical Mary. “ Please don’t be too sad for me. I’ve really had a life filled with so many blessings and so many beautiful friends. So many things I wish I’d done, promises I don’t have time to keep, friends I can’t hug one last time. Please don’t cry for me. I’m filled with gratitude for you. I love every one of you more than you could possibly know. Mary”

Dearest friend, you will be terribly missed by all of us. I’m proud to have known you and call you my friend. May you rest in Palestine.

We want to honor Mary Hughes Thompson, who has been a courageous, committed activist for justice in Palestine for many years. She was a co-founder of the flotilla movement who put her life at risk on more than one occasion. After over 8 decades of a well-lived life, Mary’s life is now drawing to a close. Thank you, Mary, for your work and inspiration to others. We love you and will always remember and honor your steadfast example.

Below are some of the many tributes that were sent to Mary from all over the world that are contained in the quilt in the photo that was presented to Mary in December 2020:

Rafa, Gaza, February 22, 2021: The initiative to raise money to honor Mary Hughes Thompson is doing remarkably well. In the first ten days of our funding drive, $8535 has been raised from 94 people around the world.

Mary Hughes Thompson died on February 5 at the age of 87. She’d spent the last twenty years of her life heavily involved in justice for Palestine, volunteering five times with the Christian Peacekeeper Team (CPT) and the International Solidarity Movement (ISM) in the occupied West Bank. She was also the co-founder of the Free Gaza movement and on one of the first two boats to sail into Gaza in 2008, one of 44 internationals to visit this enclave by sea in 41 years.

When asked for specifics on the park, Mona AlFarra, MD, director of Projects in Gaza for MECA replied, “This playground will be a beautiful place for children of Rafah to play and enjoy and also an act of solidarity where we will keep her memory alive and let the children know about Mary and all the people around the world working for our rights.”

Dr. Mona added, ”Mary loved the Palestinian people and supported our rights. She was one of the people who helped break the siege on Gaza with the Free Gaza movement. When she came to Gaza by ship, she brought with her gifts for children and made strong connections to women and children in Gaza. She touched our hearts. Even at the end of her life, Mary was thinking of what she can do for Palestine.”

Help get this project up and running as a memorial to a determined woman for peace. Donations can be made by clicking the link provided, here: https://bit.ly/3keYZD7 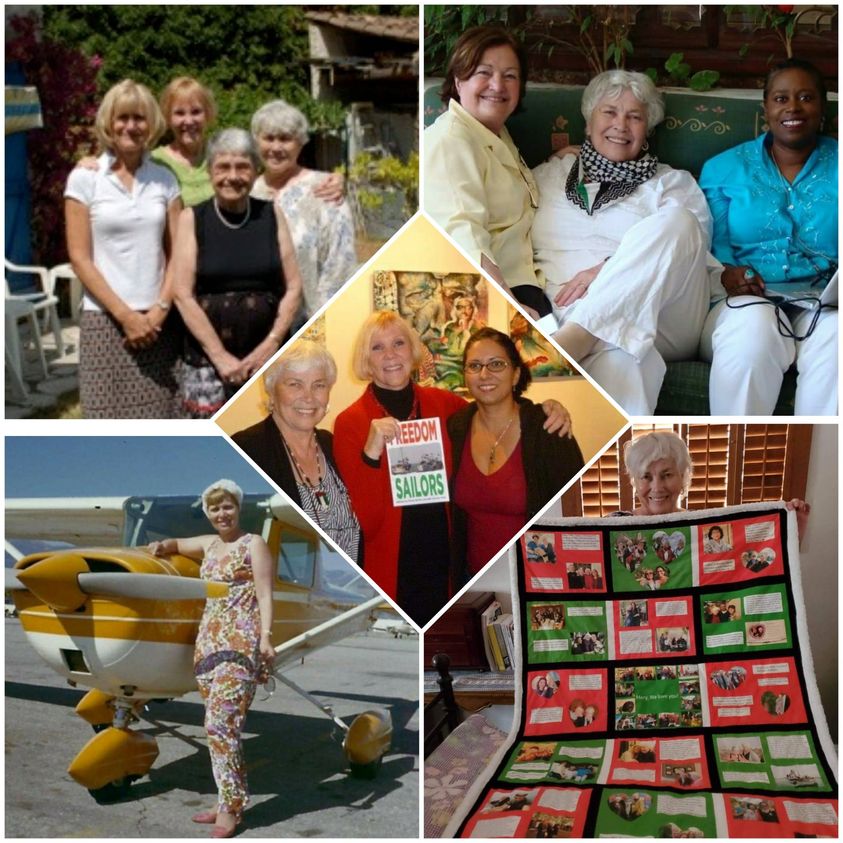