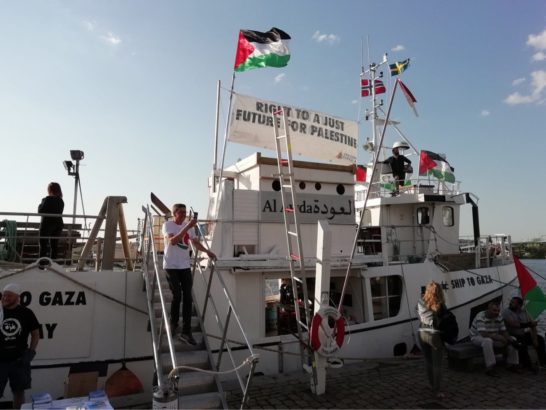 Freedom Flotilla To Gaza Vessels In Copenhagen May 20-21

The 2018 Gaza Freedom Flotilla, filled with humanitarian aid and activists from all over the world, is on its way from Sweden in what is expected to be a 75-day trip to Gaza. After two successful voyages in 2008 and 2009, Israel has blocked such attempts, including ramming boats and once killing 10 of those on board. Today it was harassed by the German Coast Guard. Keep an eye on this story. IAK will provide updates.

Just before noon local time (May 23,2018), the Freedom Flotilla vessel Al Awda (The Return) was boarded by the German Coast Guard, at the orders of the German Ministry of Interior. They collected all the passports on board, wrote down everyone’s personal data, searched the vessel thoroughly, asked for detailed information about ports of call along the way to Gaza, and inquired about the whereabouts of the Swedish sailing boats traveling with us in parallel.

The Scandinavian crew on this ship are all veterans of earlier Freedom Flotillas and attested that they have previously been harassed by other Coast Guards from European countries. Of course, our vessel is international waters and are doing nothing illegal – and this is by no means standard procedure.  The massive German Coast Guard ship had been tailing Al Awda all morning, and finally sent a rubber dinghy with a crew of four to check it out.

We are within an hour-and-a-half of Kiel, having arrived early, and are moving slowly so that the sailboats can catch up with us and we can all arrive in unison at Kiel harbour.

Reporting from the high seas off the coast of northern Germany.

The boats are scheduled to arrive in Kiel from Copenhagen on Wednesday May 23 and will be in port until Friday morning May 25. A reception is expected at 6PM. The boats will visit European ports on their way to challenge the illegal Israeli-Egyptian blockade of Gaza in late July.

The Freedom Flotilla is sailing in 2018 for the Right to a Just Future for Palestine. We challenge the blockade of Gaza and demand an end to our governments’ complicity with the blockade, which has created a humanitarian crisis, with civilians lacking clean water, electricity, and medical care. For more information about our mission and about the blockade of Gaza, see  https://jfp.freedomflotilla.org/about-just-future-palestine

On Thursday afternoon May 24 in Kiel, the boats will be met by Reiner Braun, Co-President of the International Peace Bureau in Berlin. Braun comments: “The blockade of Gaza violates the human rights of Palestinian civilians. If unaddressed the blockade is likely to lead to more war in the future as it has in the past. As peace advocates we must challenge this human rights violation and end it.”

Freedom Sailors: The Maiden Voyage of the Free Gaza movement and how we succeeded in spite of ourselves