You Are Here: Home → Four Palestinians killed and over 600 injured in Gaza during continuing demonstrations along the fence with Israel 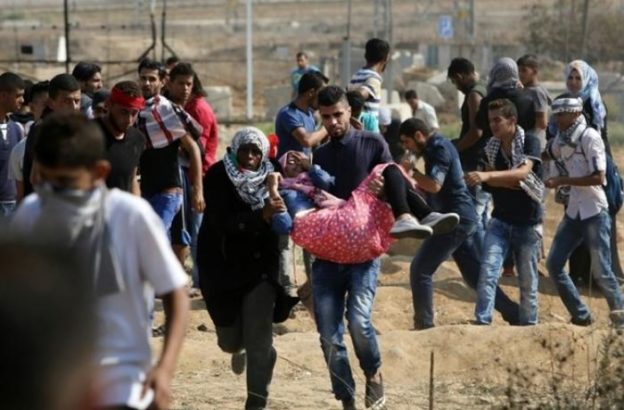 “The recent demonstrations and violence that took place along the Gaza border… have triggered a health crisis of unprecedented magnitude in this part of the world,” said Robert Mardini, the ICRC’s head of operations for the Middle East.

With 4 new Palestinian deaths, the official toll is now 135, including 13 children. Health care worker casualties include 2 deaths and 321 injuries, with 41 damaged ambulances. Medical services are stretched to their limits and funding is desperately needed for humanitarian response to the crisis. Meanwhile, calls have come in for a transparent investigation into Israel’s possible excessive use of force.

from OCHA-oPt (UN Office for the Coordination of Humanitarian Affairs, occupied Palestinian Territories)

June 8, 2018 – Mass demonstrations along Israel’s perimeter fence with the Gaza Strip took place today for the eleventh consecutive Friday, as part of the ‘Great March of Return’. As of 20:00, Israeli forces killed four Palestinians, including one 15-year-old boy, and injured 618 demonstrators, according to the Ministry of Health (MoH) in Gaza. 254 of the injuries were transferred to hospitals, including 117 due to live ammunition injuries, according to the Ministry of Health (MoH) in Gaza. Eight are said to be in a critical condition. One Israeli soldier was also reportedly lightly injured. Today’s casualty toll was the highest since the demonstrations on 14 May, when over 60 Palestinians were killed and 2,000 injured, the highest casualty toll in the Gaza Strip in a single day since the 2014 hostilities. For cumulative casualty figures and breakdowns, as of 7 June, see the OCHA Snapshot.

Between 20,000 and 30,000 people participated today in protests at the five tent camps located some 600-700 metres from the perimeter fence, the highest number in recent weeks. As in previous weeks, hundreds of demonstrators marched from the tent camps towards the fence, burned tires and threw rocks and other objects at Israeli forces, and flew paper kites and gas balloons loaded with flammable materials, which have damaged agricultural land and crops in southern Israel in recent weeks. Israel reported that a number of explosive devices and a grenade were used against their forces and that a shooting took place against an Israeli post in northern Gaza. The Israeli authorities had reinforced forces, including snipers, in anticipation of today’s protests. Yesterday, the Israeli air force dropped pamphlets over the tent camps, as well as the main cities in Gaza, warning people not to participate in the demonstrations and to stay away from the fence and also to refrain from attempting to breach or damage it.

Since 30 March, according to the MoH in Gaza, Israeli forces have killed 101 Palestinians, including 13 children, during the course of the “Great March of Return” demonstrations. In addition, 34 Palestinians have been killed during the same period in contexts others than demonstrations, including six people whose bodies are being reportedly withheld by the Israeli authorities. Five Israelis have reportedly been injured.

The large number of casualties among demonstrators since 30 March, in particular the high percentage injured by live ammunition, has raised concerns about excessive use of force, alongside calls for independent and transparent investigations of these incidents, including by the UN Secretary-General. The Israeli authorities have stated that many of the fatalities were members of Hamas and other armed groups and have stated that an investigation will review the use of force, including incidents of fatal shooting.

The Palestinian casualties have included health care workers: from 30 March to 3 June, 321 health workers and 41 ambulances have been affected, according to data provided by the Palestinian Ministry of Health, the Palestinian Red Crescent Society, the Palestinian Medical Relief Society (PMRS) and the Union of Health Work Committees. Of those affected, 23 were hit by live ammunition, causing two fatalities, including a 21-year-old woman who was volunteering with the PMRS on 1 June.

Gaza’s already overstretched health sector has been struggling to cope with the mass influx of casualties. Medical supplies are significantly depleted and access to healthcare for non-trauma patients is being compromised, with non-surgical wards converted to surgical wards to cope with the huge influx of trauma patients. These developments have exacerbated the already fragile situation of the health system in Gaza as a result of over 10 years of blockade, the deepening intra-Palestinian political divide, a deteriorating energy crisis, and inconsistent payment of public sector medical personnel.

Following the very high number of casualties since 30 March, as well as the extended timeframe of the demonstrations, originally planned to conclude on 15 May, humanitarian actors have revised the total financial requirements upwards to approximately US$20.8 million to support the humanitarian response to the crisis in Gaza, covering the period 30 March to 30 September 2018. Nearly $7 million in funding has already been provided; however critical gaps remain, leaving $13.9 million in new contributions still required to meet life-saving needs, in the areas of emergency healthcare, mental health and psychosocial support, and protection. This funding is required in addition to the over $ 400 million requested in the 2018 Humanitarian Response Plan for interventions in Gaza, which is currently only 18.7 per cent funded.

The Erez Crossing was closed in both directions with exceptions for urgent humanitarian cases. The Kerem Shalom goods crossing was also closed. The Rafah Crossing is expected to remain open through the entire month of Ramadan (which started on 17 May), allowing for the movement of passengers, including wounded people, as well as goods.

Disclaimer: Data and analysis provided in this Flash Update is based on preliminary information available. Further assessments are pending.