You Are Here: Home → Former intelligence officials: US drone attack on Iran motivated by Israel 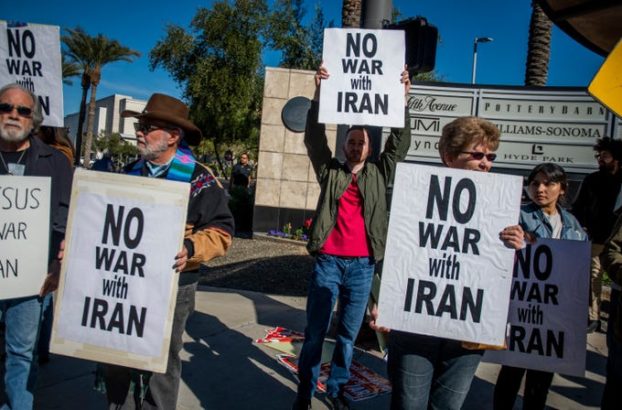 Phoenix: People protest the Trump administration’s killing of a top Iranian general and decision to send 3,000 more soldiers to the Middle East.

“We write with a sense of urgency suggesting you avoid doubling down on catastrophe,” Veteran Intelligence Professionals tell Donald Trump in their latest memo to the president…

“It is time to call a spade a spade. The country expecting to benefit most from hostilities between Iran and the U.S. is Israel…”

MEMORANDUM FOR: The President

SUBJECT: Doubling Down Into Another “March of Folly”?

The drone assassination in Iraq of Iranian Quds Force commander General Qassem Soleimani evokes memory of the assassination of Austrian Archduke Ferdinand in June 1914, which led to World War I. Iran’s Supreme Leader Ayatollah Ali Khamenei was quick to warn of “severe revenge.” That Iran will retaliate at a time and place of its choosing is a near certainty. And escalation into World War III is no longer just a remote possibility, particularly given the multitude of vulnerable targets offered by our large military footprint in the region and in nearby waters.

What your advisers may have avoided telling you is that Iran has not been isolated. Quite the contrary. One short week ago, for example, Iran launched its first joint naval exercises with Russia and China in the Gulf of Oman, in an unprecedented challenge to the U.S. in the region.

It is time to call a spade a spade. The country expecting to benefit most from hostilities between Iran and the U.S. is Israel (with Saudi Arabia in second place). As you no doubt are aware, Prime Minister Benjamin Netanyahu is fighting for his political life. He continues to await from you the kind of gift that keeps giving.

Likewise, it appears that you, your son-in-law, and other myopic pro-Israel advisers are as susceptible to the influence of Israeli prime ministers as was former President George W. Bush. Some commentators are citing your taking personal responsibility for providing Iran with a casus belli as unfathomable. Looking back just a decade or so, we see a readily distinguishable pattern.

Bush paid no heed, prompting Scowcroft to explain in Oct. 2004 to The Financial Times that former Israeli Prime Minister Ariel Sharon had George W. Bush “mesmerized”; that Sharon has him “wrapped around his little finger.” (Scowcroft was promptly relieved of his duties as chair of the prestigious President’s Foreign Intelligence Advisory Board.)

In Sept. 2002, well before the attack on Iraq, Philip Zelikow, who was Executive Secretary of the 9/11 Commission, stated publicly in a moment of unusual candor, “The ‘real threat’ from Iraq was not a threat to the United States. The unstated threat was the threat against Israel.” Zelikow did not explain how Iraq (or Iran), with zero nuclear weapons, would not be deterred from attacking Israel, which had a couple of hundred such weapons.

When a docile, Peter-principle, “we-are-still-winning-in-Afghanistan” U.S. military leadership sends more troops (mostly from a poverty draft) to be wounded and killed in hostilities with Iran, Americans are likely, this time, to look beneath the equally docile media for answers as to why. Was it for Netanyahu and the oppressive regime in Israel? Many Americans will wake up, and serious backlash is likely.

Events might bring a rise in the kind of anti-Semitism already responsible for domestic terrorist attacks. And when bodybags arrive from abroad, there may be for families and for thinking Americans, a limit to how much longer the pro-Israel mainstream media will be able to pull the wool over their eyes.

Those who may prefer to think that Gen. Scowcroft got up on the wrong side of the bed on Oct. 13, 2004, the day he gave the interview to The Financial Times may profit from words straight from Netanyahu’s mouth. On Aug. 3, 2010, in a formal VIPS Memorandum for your predecessor, we provided some “Netanyahu in his own words.” We include an excerpt here for historical context:

Netanyahu believes he holds the high cards, largely because of the strong support he enjoys in our Congress and our strongly pro-Israel media. He reads your [Obama’s] reluctance even to mention controversial bilateral issues publicly during his recent visit as affirmation that he is in the catbird seat in the relationship.

During election years in the U.S. (including mid-terms), Israeli leaders are particularly confident of the power they and the Likud Lobby enjoy on the American political scene.

Netanyahu’s attitude comes through in a video taped nine years ago and shown on Israeli TV, in which he bragged about how he deceived President Clinton into believing he (Netanyahu) was helping implement the Oslo accords when he was actually destroying them.

The tape displays a contemptuous attitude toward — and wonderment at — an America so easily influenced by Israel.  Netanyahu says:

“America is something that can be easily moved. Moved in the right direction. … They won’t get in our way … Eighty percent of the Americans support us. It’s absurd.”

Israeli columnist Gideon Levy wrote that the video shows Netanyahu to be “a con artist … who thinks that Washington is in his pocket and that he can pull the wool over its eyes,” adding that such behavior “does not change over the years.”

We ended VIPS’ first Memorandum For the President (George W. Bush) with this critique of Secretary of State Colin Powell’s address at the UN earlier that day:

“No one has a corner on the truth; nor do we harbor illusions that our analysis is “irrefutable or undeniable” [as Powell claimed his was]. But after watching Secretary Powell today, we are convinced that you would be well served if you widened the discussion … beyond the circle of those advisers clearly bent on a war for which we see no compelling reason and from which we believe the unintended consequences are likely to be catastrophic.”

We are all in a liminal moment. We write with a sense of urgency suggesting you avoid doubling down on catastrophe.

For the Steering Group of Veteran Intelligence Professionals for Sanity:

Karen Kwiatkowski, Lt. Col., US Air Force (ret.), at Office of Secretary of Defense watching the manufacture of lies on Iraq, 2001-2003

Ann Wright, U.S. Army Reserve Colonel (ret) and former U.S. Diplomat who resigned in 2003 in opposition to the Iraq War

Lies, the Bethlehem Doctrine, and the Illegal Murder of Soleimani  (“…Developed by Daniel Bethlehem when Legal Adviser to first Netanyahu’s government…”)

Israel figured in US decision to assassinate Iranian general

“Trump has now fulfilled the wishes of Mossad. After proclaiming his intention to end America’s ‘stupid endless wars,’ the president has effectively declared war on the largest country in the region in solidarity with Israel, the most unpopular country in the Middle East….”

The New York Times reports that Israeli officials had previously pushed the idea of killing Suleimani but leaders in Israel and the U.S. resisted, lest the killing detonate a war with Iran…..

MJ Rosenberg tweets that Israel’s complicity in the attack will never be explored by Congress…..

Just as important as AIPAC is the Foundation for Defense of Democracies, a pro-Israel thinktank that has supplied many policy analysts to the Trump administration.

One of those Trump hawks, Richard Goldberg, left his job as a senior national security advisor at the White House yesterday; but Bloomberg reports that Goldberg’s salary was paid by FDD…..

In its coverage of the assassination, The New York Times gave prominent space to FDD’s ceo, Mark Dubowitz, to justify the assassination of Suleimani. Eli Clifton of the Quincy Institute points to the funding for FDD:

Perhaps relevant to disclose to NYT’s readers that FDD’s biggest donor is Trump mega donor Bernie Marcus who says “Iran is the devil”?

You’re literally quoting someone affirming Trump’s foreign policy decisions who is funded by one of Trump’s biggest donors.

Bernard Marcus is founder of Home Depot and Trump’s second biggest donor after Sheldon Adelson. Far and away Trump’s largest donor, Adelson has said he wished he had served in the Israeli army not the U.S. army. He once urged President Obama to nuke Iran.

……Marcus and Adelson and a third pro-Israel billionaire donor paved the way for Trump to withdraw from the Iran deal.

According to tax filings, Marcus’ eponymous foundation has supported hawkish and neoconservative-linked groups like the American Enterprise Institute, Christians United for Israel, Friends of the IDF, the Hoover Institution, the Hudson Institute, the Israel Project, the Jewish Institute for National Security Affairs, the Manhattan Institute, and the Middle East Media Research Institute, as well as other conservative groups like Judicial Watch and the Philanthropy Roundtable.[2] He also sits on the board of directors for the Republican Jewish Coalition.[3]

Colin Powell once blamed the Jewish Institute for National Security Affairs for the plan to invade Iraq, which he supported……

….On April 2, Special Representative for Iran Brian Hook claimed that “based on declassified US military reports, Iran is responsible for the deaths of 608 American service members. This accounts for 17 percent of all deaths of US personnel in Iraq from 2003 to 2011.”

Navy Commander Sean Robertson followed up with an email to media outlets pushing that same line. When author Gareth Porter asked Robertson for further clarification of the origins of that figure, however, Robertson “acknowledged that the Pentagon doesn’t have any study, documentation, or data to provide journalists that would support such a figure…”

How Pro Israel Neocons Pushed for War in Iraq (video)

To stop Trump’s war with Iran, we must also confront the Democrats

Prof. Narges Bajoghli explains who Soleimani was and the context of the strike (video)

Former Top Bush Official: I Saw the March to War in 2003. I’m Seeing the Same Thing with Iran Now (video)

Israel has been targeting Iran for decades