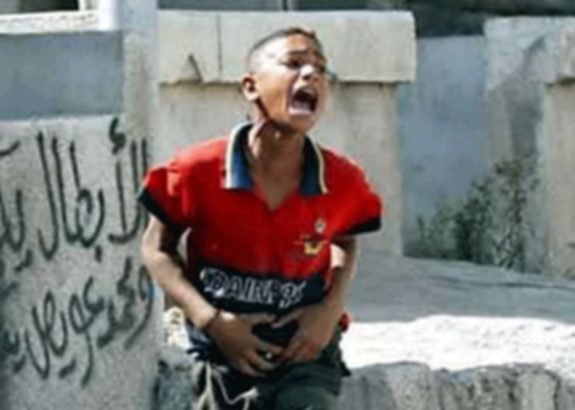 Eleven years ago this month, Alison Weir published the following account of the Associated Press erasing footage of an Israeli soldier intentionally shooting a pre-adolescent Palestinian boy (originally published in CounterPunch). This was part of a pattern by the AP, as described in the article.

What is AP erasing, ignoring and leaving out these days?

Stonewalls Queries during “Sunshine Week: Your Right to Know”

In the midst of journalism’s “Sunshine Week” – during which the Associated Press and other news organizations are valiantly proclaiming the public’s “right to know” – AP insists on conducting its own activities in the dark, and refuses to answer even the simplest questions about its system of international news reporting.

Most of all, it refuses to explain why it erased footage of an Israeli soldier intentionally shooting a Palestinian boy.

AP, according to its website, is the world’s oldest and largest news organization. It is the behemoth of news reporting, providing what its editors determine is the news to a billion people each day. Through its feeds to thousands of newspapers, radio and television stations, AP is a major determinant in what Americans read, hear and see – and what they don’t.

What they don’t is profoundly important. I investigated one such omission when I was in the Palestinian Territories last year working on a documentary with my colleague (and daughter), who was filming our interviews.

On Oct. 17, 2004 Israeli military forces invaded Balata, a dense, poverty-stricken community deep in Palestine’s West Bank (Israel frequently invades this area and others). According to witnesses, the vehicles stayed for about twenty minutes, the military asserting its power over the Palestinian population. The witnesses state that there was no Palestinian resistance – no “clash,” no “crossfire.” At one point, after most of the vehicles had finally driven away, an Israeli soldier stuck his gun out of his armored vehicle, aimed at a pre-pubescent boy nearby, and pulled the trigger.

We went to the hospital and interviewed the boy, Ahmad, his doctors, family, and others. Ahmad had bandages around his lower abdomen, where surgeons had operated on his bladder. He said he was afraid of Israeli soldiers, and pulled up his pants leg to show where he had been shot previously.

In the hospital there was a second boy, this one with a shattered femur; and a third boy, this one in critical condition with a bullet hole in his lung. A fourth boy, not a patient, was visiting a friend. He showed us a scarred lip and missing teeth from when Israeli soldiers had shot him in the mouth.

This was not an unusual situation. When I had visited Palestinian hospitals on a previous trip, I had seen many such victims; some with worse injuries. Yet, very few Americans know this is going on. AP’s actions in regard to Ahmad’s shooting may explain why.

We discovered that an AP cameraman had filmed the entire incident. This cameraman had then followed what apparently is the usual routine. He sent his video – an extremely valuable commodity, since it contained documentary evidence of a war crime – to the AP control bureau for the region. This bureau is in Israel.

What happened next is unfathomable. Did AP broadcast it? No. Did AP place the video in safe-keeping, available for an investigation of this crime? No.

According to its cameraman, AP erased it.

We were astounded. We traveled to AP’s control bureau in Israel. With our own video camera out and running, we asked bureau chief Steve Gutkin about this incident. Was the information we had been told correct, or did he have a different version? Did the bureau have the video, or had they indeed erased it. If so, why?

Gutkin, repeatedly looking at the camera and visibly flustered, told us that AP did not allow its journalists to give interviews. He told us that all questions must go to Corporate Communications, located in New York. He explained that they were on deadline and couldn’t talk. I said I understood deadline pressure, and sat down to wait until they were done. When he called Israeli police to arrest us, we left.

Back in the US later, I phoned Corporate Communications and reached Director of Media Relations Jack Stokes, AP’s public relations spokesman. I had conversed with Stokes before.

Over the past several years I have noticed disturbing flaws in AP coverage of Israel-Palestine: newsworthy stories not being covered, reports sent to international newspapers but not to American ones, stories omitting or misreporting significant facts, critical sentences being removed from updated reports.

I would phone AP with the appropriate correction or news alert. One time this resulted in a flawed news story being slightly corrected in updates. In a few cases stories were then covered that had been neglected. In many cases, however, I was told that I needed to speak to Corporate Communications. I would phone Corporate Communications, leave a message, and wait for a response. Most often, none came.

Several times, however, I was able to have long conversations with AP spokesman Stokes. None of these conversations, however, ever ended with AP taking any action. Some typical responses:

Despite this unresponsive pattern, when I learned firsthand of an AP bureau erasing footage of an atrocity, I again phoned Corporate Communications. I no longer had much expectation that AP would take any corrective action, but I did expect to receive some information. I gave spokesperson Stokes the numerous details about this incident that we had gathered on the scene and asked him the same questions I had asked Gutkin. He said he would look into this and get back to me.

After several days he had not gotten back to me, so I again phoned him. He said that he had looked into this incident, and that AP had determined that this was “an internal matter” and that they would give no response.

While I should have known better, I was again astounded. AP was blatantly violating fundamental journalistic norms of ethical behavior, and clearly felt it had the power to get away with it.

Journalism, according to the Statement of Principles of the American Society of Newspaper Editors, is a “sacred trust.” It is the bulwark of a free society and is so essential to the functioning of a democracy that our forefathers affirmed its primacy in the very first amendment of the Bill of Rights.

“Journalists are accountable to their readers, listeners, viewers and each other.

Finally, this week, on deadline with a chapter about media coverage of Israel-Palestine, I again tried to confirm some of my facts with AP. Certainly, I felt, during “Sunshine Week” AP would respond. As part of the Sunshine campaign, AP’s CEO and President Tom Curley is traveling the country giving speeches on the necessity of transparency and accountability (for government) and emphasizing “the openness that effective democracy requires.”

“The trend toward secrecy,” AP’s President has correctly been pointing out, “is the greatest threat to democracy.”

The next day I tried phoning AP’s President Curley directly. I was unable to reach him, since he was on the road giving his Sunshine Week speeches (“Secrecy,” Curley says, “is for losers”), but I left a message for him with an assistant. She said someone would respond.

I am still waiting.

It is clearly time to go to AP’s superiors. The fact is, AP is a cooperative. It is not owned by Corporate Communications spokespeople or by its CEO or even by its board of directors. It is owned by the thousands of newspapers and broadcast stations around the United States that use AP reports. These newspapers, radio and television stations are the true directors of AP, and bear the responsibility for its coverage.

In the end, it appears, the only way that Americans will receive full, unbiased reporting from AP on Israel-Palestine will be when these member-owners demand such coverage from their employees in the Middle East and in New York. As long as AP’s owners remain too busy or too negligent to ensure the quality and accuracy of their Israel-Palestine coverage, the handful of people within AP who are distorting its news reporting on this tragic, life-and-death, globally destabilizing issue will quite likely continue to do so.

In the final analysis, therefore, it is up to us – members of the public – to step in. Everyone who believes that Americans have the right and the need to receive full, undistorted information on all issues, including Israel-Palestine, must take action. We must require our news media to fulfill their profoundly important obligation, and we must ourselves distribute the critical information our media are leaving out.

If we don’t take action, no one else will.