The suppressed Al Jazeera documentary on the Israel Lobby in the U.S. will be shown in Berkeley, California:

Al Jazeera produced an explosive documentary about the Israel Lobby in the United States, in which an undercover reporter secretly filmed lobby activities around the country, including at UC Davis and Stanford.

The film documents how pro-Israel nonprofit organizations in the U.S. worked directly with a foreign government to manipulate Americans. It also reveals Israel’s projects to spy on Americans.

The documentary was never released after Israel partisans from the U.S. convinced Al Jazeera not to broadcast it.

However, the attempt to prevent Americans from viewing the film failed when it was leaked. It contains explicit, inside details about Lobby activities.

In one part a lobby official discusses their contacts with the Associated Press, Reuters, Buzz Feed, and Wall Street Journal, and their ability to change news headlines.

Another segment shows Megyn Kelly and Laura Ingraham of Fox News broadcasting a slanted, negative report on Muslim American students that had been engineered by a pro-Israel group that had the assistance of the Israeli consulate and national pro-Israel nonprofits.

An Israeli brigadier general discusses how it works with American pro-Israel groups. A former Davis student describes the use of fake Facebook accounts and reveals that AIPAC works behind the scenes to influence student elections.

Monday’s event will be the first West Coast event featuring the film. It will also include a discussion led by Alison Weir, founder of If Americans Knew, president of the Council for the National Interest, and author of a best selling book on the origins of the Israel lobby.

Organizers hope that people in the Berkeley area will help alert the public to the event using social media, bulletin boards, etc, and will bring friends and colleagues to Monday’s event.

Printable flyers for the event: 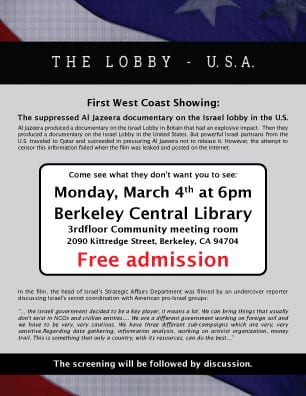 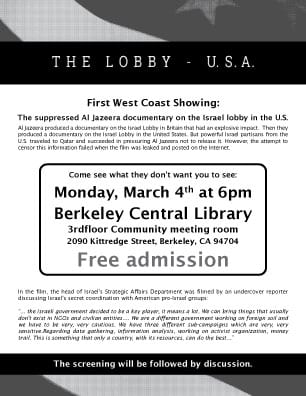