You Are Here: Home → Congratulations, Israel, on your 70th Independence Day 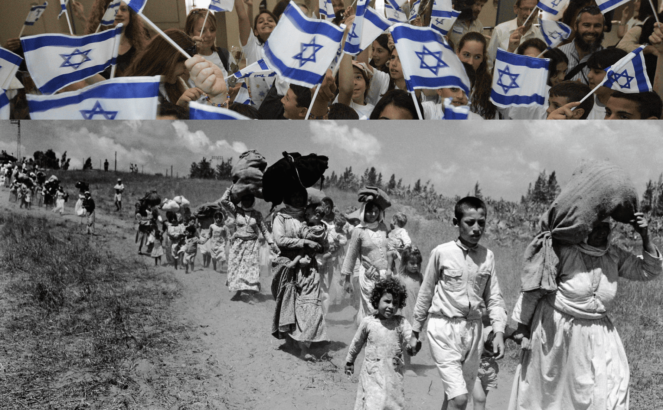 Samia Nasir Khouri boldly calls out Israel for a list of human rights violations and indignities perpetrated on Palestinians during the 70 years of its celebrated existence, including eviction, massacre, apartheid, and a brutal army regime. She then offers a prayer of blessing on the dispossessed and repentance for the dispossessors from Rabbi Brant Rosen.

Congratulations Israel on your 70th Independence Day.  Surely you should be proud of your achievements.

Of course you can always count on President Trump and his representative at the UN Nikki Haley to cover your back so as to get away with those violations. No wonder you are feeling on top of the world as you are celebrating 70 years of Independence while we celebrate 70 years of our Nakba (the catastrophe of dispossession.)

Maybe you should stop for a moment and listen  to the prayer of  one of your Jewish Rabbis, Rabbi Brant Rosen:

Receive with the fulness of your mercy
the hopes and prayers of those
who were uprooted, dispossessed
and expelled from their homes
during the devastation of the Nakba.

Sanctify for tov u’veracha,
for goodness and blessing,
the memory of those who were killed
in Lydda, in Haifa, in Beisan, in Deir Yassin
and so many other villages and cities
throughout Palestine.

Grant chesed ve’rachamim,
kindness and blessing,
upon the memory of the expelled
who died from hunger,
thirst and exhaustion
along the way.

Shelter beneath kanfei ha’shechinah,
the soft wings of your divine presence,
those who still live under military occupation,
who dwell in refugee camps,
those dispersed throughout the world
still dreaming of return.

Gather them mei’arbah kanfot ha’aretz
from the four corners of the earth
that their right to return to their homes
be honored at long last.

Let all who dwell in the land
live in dignity, equity and hope
so that they may bequeath to their children
a future of justice and peace.

Ve’nomar
and let us say,
Amen.

Inspire us to make a full accounting
of the wrongdoing that was
committed in our name.

Le’el malei rachamim,
to the One filled with compassion:
show us how to understand the pain
that compelled our people to inflict
such suffering upon another –
dispossessing families from their homes
in the vain hope of safety and security
for our own.

Osei hashalom,
Maker of peace,
guide us all toward a place
of healing and wholeness
that the land may be filled
with the sounds of joy and gladness
from the river to the sea
speedily in our day.

Ve’nomar
and let us say,
Amen.

Samia Khouri is the author of “Reflections from Palestine: A Journey of Hope.”